Advertisement
HomeSportGAAChristy Toye: ‘Rory Kavanagh is one of the best I’ve played with’
Advertisement 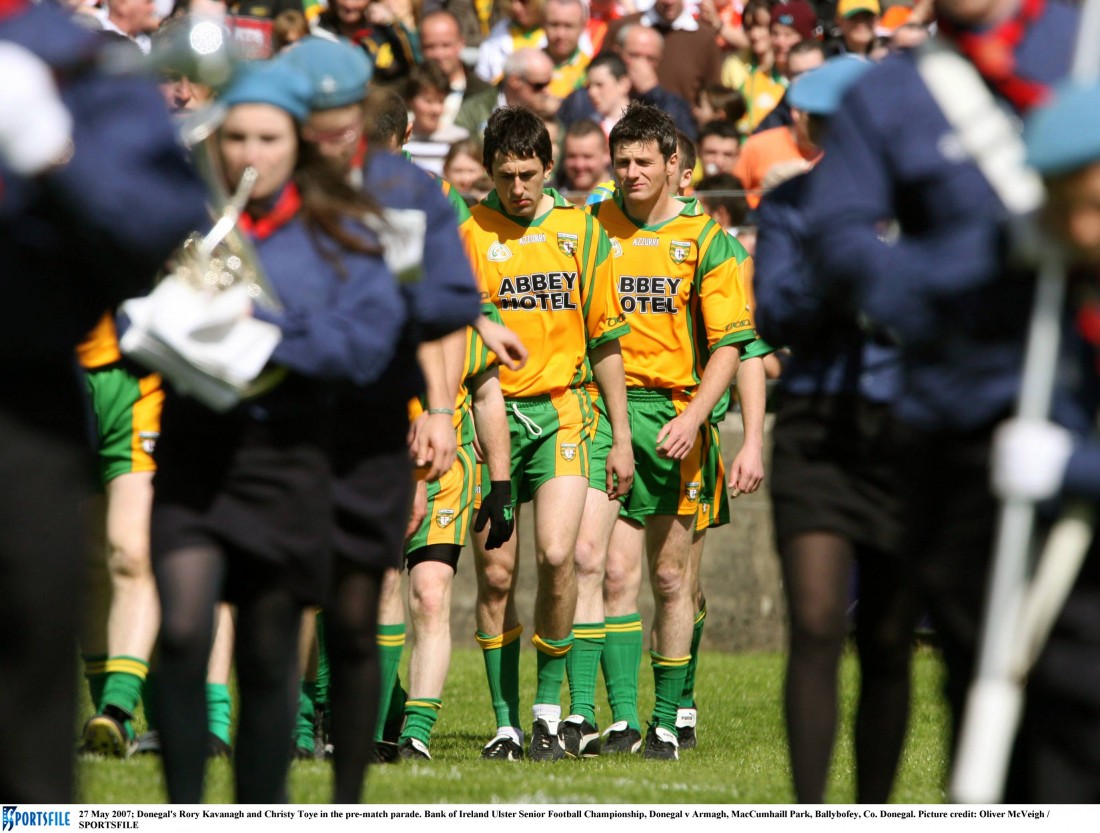 Rory Kavanagh and Christy Toye in the pre-match parade ahead of the Ulster Senior Football Championship game against Armagh in Sean MacCumhaill Park back in 2007. Picture: Oliver McVeigh / SPORTSFILE

WHEN the board went up in Fr Tierney Park on March 24, 2002, Christy Toye made way for Rory Kavanagh to make his Donegal debut.

Last week’s confirmation by Kavanagh that he was retiring from inter-county football, after 13 campaigns that spanned 132 games, ended what Toye believes to be the Donegal career of ‘one of the best’ he’s lined out with.

Toye has stayed around for another go, but the departure of Kavanagh, with whom he’s played at county level since their underage days, means the bell is almost ready to toll for the St Michael’s man.

Kavanagh had mulled over his future after both the 2012 and 2013 seasons before finally calling it a day when he asked himself if he could go to the well again in 2015.

“He’s definitely one of the best I’ve ever played with,” Toye says.

“In terms of skill, ability, pace, power, Rory was unreal. He’s so intelligent on the ball. In training you’d see Rory doing stuff that no-one else could do and the thing about him is that it came so naturally to him. Rory definitely wasn’t as recognised as he should have been.

“He was one of our most consistent players. Rory was always a team player and maybe that’s why he suffered when it came to individual recognition. The year we won the All-Ireland in 2012 I don’t know how he didn’t get an All-Star.”

After last year’s All-Ireland semi-final win over Dublin, one Donegal player asked of a couple of reporters who they thought had been Donegal’s key man. They ventured Ryan McHugh, who scored two of the goals, mooted Neil McGee and Paul Durcan as candidates and noted Neil Gallagher’s colossal efforts.

‘What about Kavanagh?’ came the curious response. ‘Look at the first 20 minutes, he was outstanding, one of the main reasons we stayed in that match.’

“Last year, you could see Rory’s worth to the team any time he played,” Toye agrees.

“He drove us on against Armagh and against Dublin he was unreal. He could just keep us going. It’s strange, some people might only see now how valuable he was when he isn’t there.

“Kavanagh was just so consistent that we, as players, nearly came to just expect it of him.

“We saw of him what no-one else did – stuff behind the dressing room door. Rory is a natural leader. What he said was always said well and it always seemed well thought out – it probably wasn’t though! He was a big influence in that way.”

It was Mickey Moran who first made the call to both Toye and Kavanagh in the winter of 2001. They’ve been friends and team-mates since before that even.

“We joined up with the panel in 2001, it was around the time of the relegation play-off against Louth,” Toye remembers.

“There was myself, Rory, Colm McFadden, Kevin Cassidy and Conall Dunne. When St Eunan’s won the MacLarnon, Rory was a star on that team and he was with us at minors and under-21s on the county.

“It’s sad to see someone like that go, someone you’ve basically grown up with on the team. We had great camaraderie and Rory was always a very popular member of the squad.

“We’ve gone through everything with the county.”

Kavanagh took some time to rise to prominence. By the time he was handed a first Championship start, against Down in 2006,

Toye had become the county captain. That scorching Sunday in Ballybofey, Kavanagh repaid Brian McIver’s faith with a stunning goal that proved crucial at the end.

Toye says: “I remember him riffling the ball to the roof of the net. After the game I was being interviewed, it was the year I was captain, and one of the reporters asked me about it being Rory’s first start; I couldn’t believe it. He came in that year for the Championship and he was excellent – he’s been so important to us since that.”

That year was typical of their Donegal. They reached the Ulster final and lost to Armagh, put up a huge battle with Cork in an All-Ireland quarter-final only to fall heroically.

When Jim McGuinness took the reigns in 2010, they went where they’d only dared to dream about before.

Toye says: “When we came into the panel first, Donegal were kind of contenders. We’d be floating about in quarter-finals or semi-finals, threatening to break in and then we’d fall flat. In the last four years we got to the top and it is amazing to have experienced all of that as a group. We’ve seen it all really.”