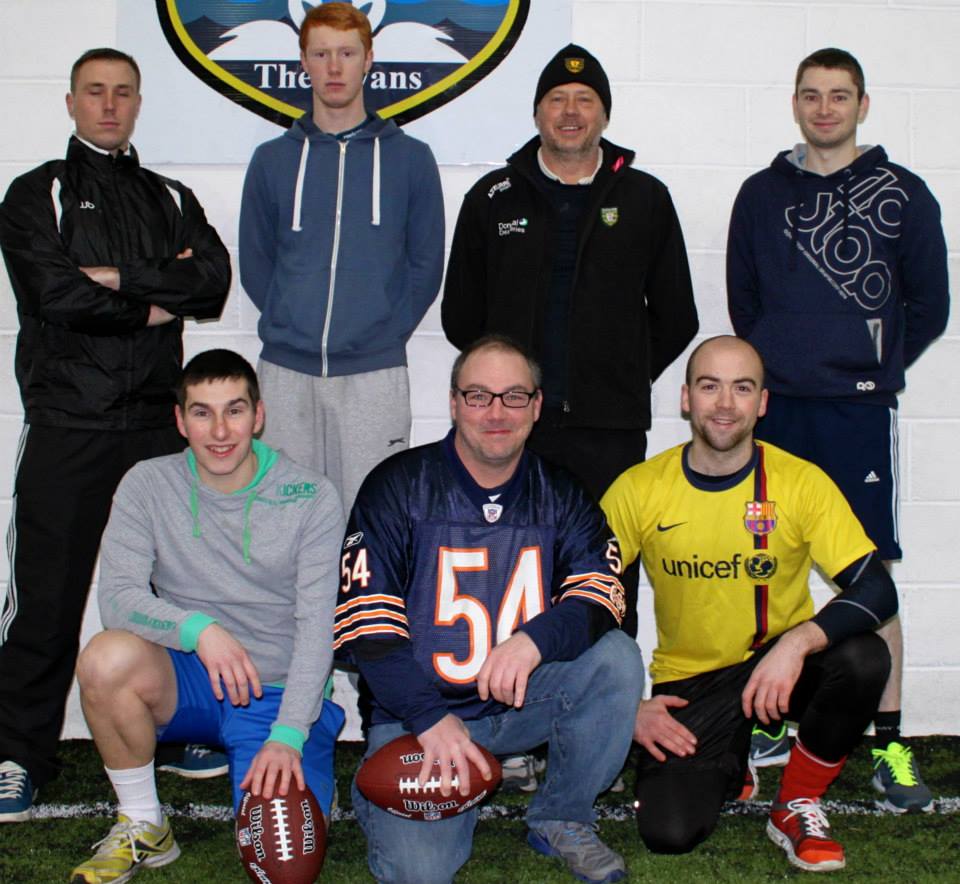 CATHAL Curran’s father always advised him to try everything at least once.

This Sunday, William Curran’s words are part of the reason that Donegal’s new American Football team – the Donegal-Derry Vipers – will hold their first training session this Sunday, January 11th, at Aileach FC’s indoor facility at Burnfoot.

Sunday’s session has been months in the planning, but finally Head Coach Jason Brock will conduct the Vipers’ first-ever collective training session.

The Vipers are set to compete in the Irish American Football League (IAFL) in 2015 having already met with League officials at the end of November.

The club is the brainchild of Cathal Curran, who hails from Kildrum, between Killea and Newtowncunningham, and Moville native James Fox. Their aim is to have the Donegal-Derry Vipers playing in IAFL 2 next season.

“In the four months since we started work on this project myself, James and my girlfriend, Frieda Gallagher, have received well over 150 emails from people looking to sign up to play for the Vipers, our website has over 10,000 views and our promotional adverts on Facebook have gone viral,” says Curran, who also played Gaelic Football with Naomh Colmcille and rugby with Drumahoe.

“The biggest source of contact we have is our players’ logs on the website and WhatsApp messages, which have been great for us keeping in contact with one another. Our video advertising the first training session has had over 5,000 views and is really upping the interest again so more emails are coming in every day. The response has been fantastic.

“The last four have been a blur but I’ve enjoyed every minute of it so far have meet some great people in the process.

“We have a great mix of people lined up to be involved in the club behind the scenes, people like Noel Leslie, Kieran Friel, Martin McNamee, Rhys Lewis, Joe Cannon, Sharon Monaghan, Martin McKinley, John Fullerton and Shane O’Donnell to name a few.”

Thomas McKinley, a member of Donegal’s All-Ireland winning squad from 2012, and his brother, Ryan, are on board to aid with the strength and conditioning while Johnny Loughrey has joined as the head physio. The McKinleys are club-mates of Curran’s at Naomh Colmcille. Curran has a keen interest in the area of video analysis and in club promotion having studied marketing while at college.

For Curran and Fox, the reason for setting up a club in the Donegal area was simple: There isn’t one already!

Curran says: “The first time we heard of an American Football League in Ireland was while we were still students in the LYIT, both of us were studying Marketing at the time so were working on a group assignment of some sort and we came across their website.

“When we looked more into it and discovered that it was a serious organisation, and have a full league structure that even have the possibility of playing in Europe.”

William Curran played Tug of War for years, with the Northern Farmers in Derry, and they came seventh in the World Championships in Sweden in 1977.

Cathal says: “I have always been very willing to try out new sports including rugby, soccer, AFL while travelling and, believe it or not, ultimate Frisbee while I was at college!

“My father has always told me to try everything at least once, so why not American Football?”

Why not, indeed and so to Burnfoot on Sunday, where Head Coach Brock, an American native who is now living in Buncrana, will oversee the coaching of the new team.

“Without him we would not be sitting in this position planing or first session,” Curran says.

“The man has a wealth of knowledge of the sport and is a massive Bears fan – a tip for players trying out is just mention Walter Payton to him, it could secure your starting position!”

There are 20 teams already playing in the IAFL, including the Tyrone Titans, who are based in Strabane. Paul Braniff, the head coach of the Titans, has been a big help to the ambitious Vipers.

Curran says: “It’s one of Europe’s fastest, if not fastest grown sports for sure. The IAFA have been doing a fantastic job over here promoting the sport.

Under Paul, the Titans not only got set up; they smashed the League and got promoted in their first year. That would have taken a massive effort from all involved.

“Paul has been a big help to us right the way through or set up, especially getting me prepped for the Vipers audits a number of months back.”

Sunday’s training session is open to prospective new players. There is no cost for the session, but those attending are asked to bring shorts, runners and a water bottle.

If you are attending and have not already signed up, send a text to 086-0362383 or sign up through their website, www.donegalderryvipers.com