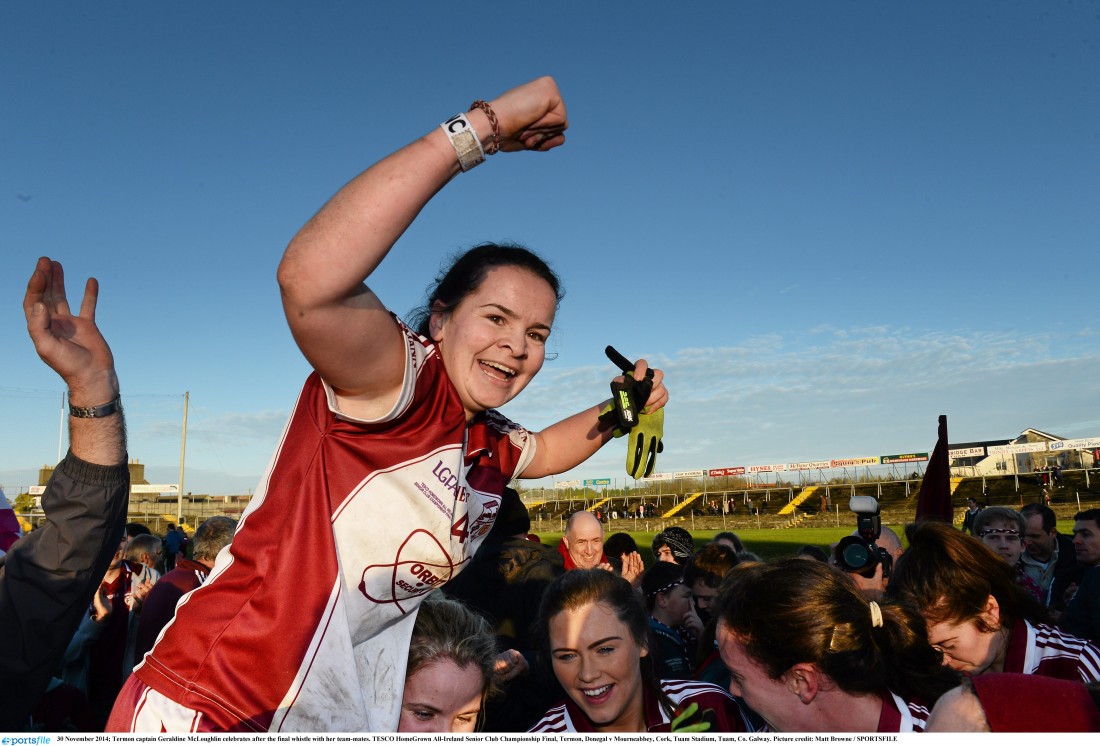 McLaughlin helped herself to 3-8 as Termon took the Dolores Tyrrell Memorial Cup thanks to a 3-12 to 1-13 win, all bar four points coming from play – and the three goals scored off the left foot that manager Francie Friel asked her to improve at the start of the year!

In a dramatic and absorbing final, Mourneabbey were left spellbound by the Termon magician.

Her third, the knockout blow, arriving in the closing minutes saw her take a pass from Roisin Friel with six opponents for attention. McLaughlin switched on the afterburners and calmly rolled to the bottom corner.

It was a milestone goal for the precociously-talented McLaughlin, the captain, who scored 25-35 in Termon’s seven Championship gams this year.

She entered yesterday’s final with 97 Championship goals for Termon since she first played for the minors at The Burn Road; the hat-trick goal takes her onto the 100.

“It’s unbelievable to win it at all and even more so to win it with your family,” McLaughlin said.

Their squad contains the McCaffety sisters Therese, Olive and Petra; the Friel sisters Roisin and Niamh; and the McLaughlin sisters Sharon, Nicole and Geraldine, while eleven of the panel live within a mile of Termon’s home ground, The Burn Road.

Hundreds of maroon-clad supporters made their way to Tuam, including founder members Patrick Hilferty, Benny Trearty and James Trearty, as well as Paddy Murray senior, another stalwart from Termon’s early years.

Manager Friel revealed that his star turn played despite being inhibited by a knee injury that will require corrective surgery.

He said: “She had a cartilage operation in May and the knee went again so she’s due for another operation. I want to thank the doctor in Gweedore, Dr Delap, who sorted her out with an injection. It worked miracles. Without that injection she wouldn’t be able to play.”

Mourneabbey led 0-10 to 1-3 at half-time, but a half-time talk allowed Termon to compose themselves and, with McLaughlin on fire, they snuffed out the Cork side’s comeback hopes.

McLaughlin said: “We were four points down at half-time and we were outplayed and we knew that wasn’t us. We knew if we could play at all in the second half then we could take home the cup.

Termon had Gráinne McDaid sin-binned late in the first half and Emer Gallagher met a similar fate in the last ten minutes, but courageous Termon dug deep with Nicole McLaughlin, Olive McCaffery, Sharon McLaughlin, Shannon McGroddy and Maria Carr on form; not to mention the scoring spree by the captain.

A picture did the rounds last week of a Termon Under-12 team from a county final loss to Sean MacCumhaills in 2001. Yesterday, those same girls reached for the stars.

McLaughlin said: “Last night in the hotel we were saying that about 12 years ago these girls were playing junior football in Donegal and went out and didn’t win one game in the whole year. Now, we’re All-Ireland champions and the best team in Ireland. Unreal!”