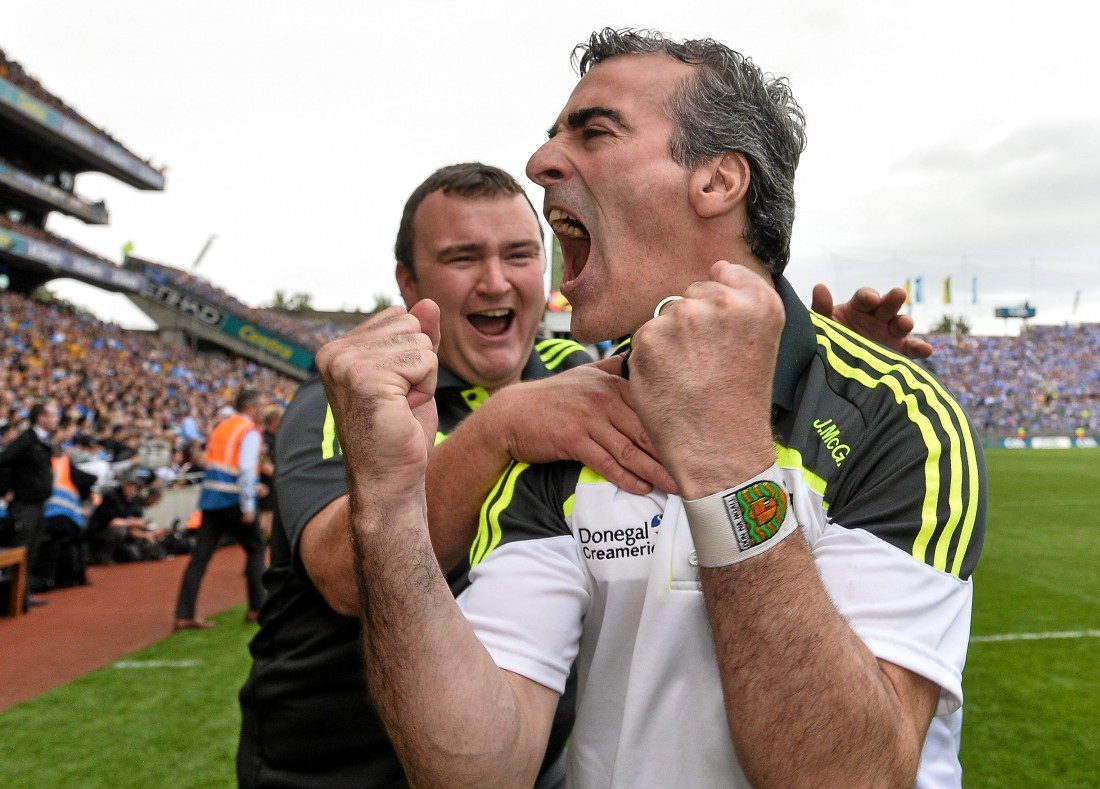 Donegal manager Jim McGuinness celebrates with kitman Joe McCloskey at the end of the All-Ireland semi-final.

JIM McGuinness had a detailed plan in place for Donegal’s All-Ireland semi-final against Dublin that was revealed to his players in the moments after their quarter-final win over Armagh.

McGuinness had consistently been of the ‘one game at a time’ mantra with his players, but privately McGuinness had been gearing up for a crack at the Dubs. Ryan McHugh netted twice and Colm McFadden goaled in a 3-14 to 0-17 win for Donegal that blew the Sam Maguire race open and shattered Dublin’s dreams of retaining the All-Ireland.

Dublin had been blitzing all before them until they met Donegal, but it was a day McGuinness had in mind from an early stage.

It was after they squeezed past Armagh in a tense quarter-final that McGuinness told his men of the plan.

“Jim McGuinness informed his players in the dressing room directly after the Armagh game that he had a plan that he had been working on for a while on how Dublin would be defeated,” the outgoing Donegal secretary, Aodh Máirtín Ó Fearraigh, has written in his annual report ahead of Sunday-week’s county convention in Donegal town.

“He laid a folder on a table in the middle of the dressing room and said that he would divulge the contents to the players on Tuesday night at training.

“There was an air of confidence in that dressing room, and a sense of belief that the plan Jim had would do what most of the country said was not possible, that was to beat Dublin.

“Nobody gave Donegal a hope. The bookies, pundits and commentators were talking of a Dublin and Kerry All Ireland final.

“Those Donegal supporters who availed of 10/1 odds on a victory, securing a September 21 final against Kerry, were laughing all the way to the bank. Jim McGuinness and his team had other plans and tore up the scrip in some style.”

That win was McGuinness’s last as the Donegal manager, as he ended his tenure just 12 days after they were beaten by Kerry in the All-Ireland final.

Ó Fearraigh is also stepping down as secretary after a five-year term in that office. Under GAA rule, the Gaoth Dobhair man has to hand over the baton this year and he is now expected to challenge for one of the Ulster Council delegate’s positions.

In a wide-ranging report Ó Fearraigh also touches on the delicate matter of the fixtures schedule.

He wrote: “It is proving to be very difficult to find a right balance to cater for club and county football. The club is the bedrock of our association and we must strive to provide a better programme of games for our club players.

“Club games should not suffer due to county teams being successful. The huge majority of clubs players train and prepare with little idea or when games are likely to be played.

“We must remember that 98 per cent of all footballers are club footballers. The tightening up of fixtures for clubs players is something that really needs to be addressed.