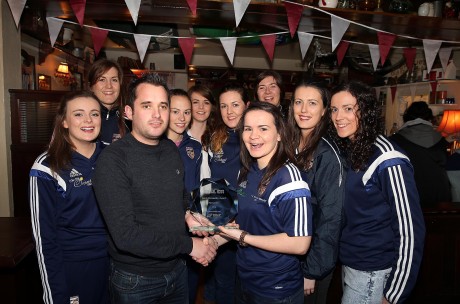 GERALDINE McLaughlin surely set some sort of a record last Sunday when she scored 3-8 in Termon’s All-Ireland final win over Mourneabbey.

The magic wand of the Burn Road’s sharpest shooter was all over Tuam Stadium. If the County Galway venue felt like a throwback to a bygone era, then McLaughlin’s performance seemed like the future being played out live. Hers was a magical display those three goals and eight points provided the kick for Termon to finally land their Holy Grail, the All-Ireland senior club title.

McLaughlin won the two frees converted by Maureen McLaughlin and had the decisive hand in the other two Termon points from Sharon McLaughlin and Roisin Friel. Every score had the captain’s fingerprints.

Her three goals were all score off her left foot. At the start of the year, manager Francie Friel asked her to improve the left foot. Her all-round game was on show in some style on Sunday, scoring the goals off the left and all eight points off the right.

As the Termon supporters were counting the clock down, McLaughlin was playing a bit of keep ball close to the sideline where Friel and mentors Trevor Alcorn and Paul McDaid were situated. Gus Chapman, the referee, signalled time and the emotions spiralled.

“I looked up and there were only about 30 seconds left and I knew then that we had it,” says McLaughlin, who scored 25 goals and 35 points across Termon’s seven Championship games this year.

“It was unreal at the final whistle. The feeling was indescribable.

“I still can’t believe it yet. It’s getting more real when so many people are coming up to talk to you about it and saying: ‘Well done’. It actually feels like a dream.”

At the season’s start, Friel appointed McLaughlin as his captain. For the 21-year-old, the highlight of the day was that moment when she led her tea, up the steps to get her hands on the Dolores Tyrrell Memorial Cup.

“Up there looking down at the crowd, at your family and at your whole parish…” she gleefully sighs.

“Going up to get the Cup and landing back to the Lagoon…we just didn’t know how many people would be there. None of us could believe it, standing up and the place just packed with Termon people.

“That was what we trained for, to get our hands on that Cup. It has paid of for all of us, for the players and for the three boys.”

Termon looked to be on thin ice at half-time when they trailed by four points, 0-10 to 1-3. Within their own group, there was an unwavering belief and conviction that they were capable. They hadn’t played in the first-half and yet were within touching distance of the slick Cork team.

“The first half is probably the worst we played all year,” McLaughlin says.

“They were definitely the best team we played. Our backs had to work so hard and they turned over an unreal amount of ball. Mourneabbey should have been further ahead, but our defence was just brilliant and Laura Gallagher made two brilliant saves too. Those saves kept us in the game. We dug deep but that made sure we weren’t gone by the time half-time came.

“Seriously, a lot of people say that the goals were the turning point, but those saves were I think.”

Modest as ever, McLaughlin doesn’t look for the limelight and is quite content to deflect the credit. Gallagher’s save from Laura Fitzgerald in the tenth minute was certainly a key moment in a game that Termon didn’t really arrive to until the second half.

McLaughlin says: “We didn’t go out to play that way. I don’t think it was because of nerves, but I think we just concentrated too much on what they were doing and not enough on what we could do ourselves. Normally we wouldn’t worry that much about the opposition and we’d just go out to play the game the way we can.

“At half-time, we spoke about it. We have some unreal leaders in the team and the likes of ‘McCaff’ (Roisin McCafferty) spoke up really strong in the dressing room. Francie was just telling us to go out and play the way we can, the way we’ve been practising all year.”

Termon had questions asked, but each time they answered. Katie Healy hit a goal for the Cork side and Termon had full-back Emer Gallagher, who gave a towering display, sin-binned just before that goal. Another side might have buckled – not Termon.

McLaughlin says: “We just believed that we could win it. Emer Gallagher was playing brilliant and was sin-binned just before their goal, but we just couldn’t let the game go. The last goal settled it, but it just trickled over the line. It was the same in the semi-final, we just kept going after we went down to 14 players.”

In McLaughlin’s display, Termon had one of the best individual performances of all-time. Lofty words, but to kick 3-8 and be involved in each of the other scores truly was exceptional.

“The performance came from training – our toughest games are in training,” she says.

McLaughlin’s scores were the work of art and it was fitting that the third, decisive goal took her onto 100 goals for Termon in minor and senior championship football. It is a performance that will recounted in Termon for years to come. “She’s God to us,” Roisin McCafferty said.

Seán Bán Breathnach was commentating on Raidio na Gaeltachta at Sunday’s final. After one of McLaughlin’s scores he turned, almost awe-struck in the press box. “She’s just a genius,” the veteran commentator exclaimed.

It was impossible to argue. The genius Geraldine had shone on Termon’s day of days. 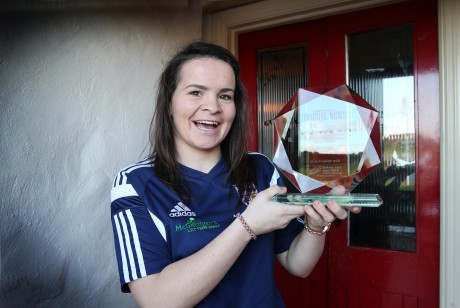