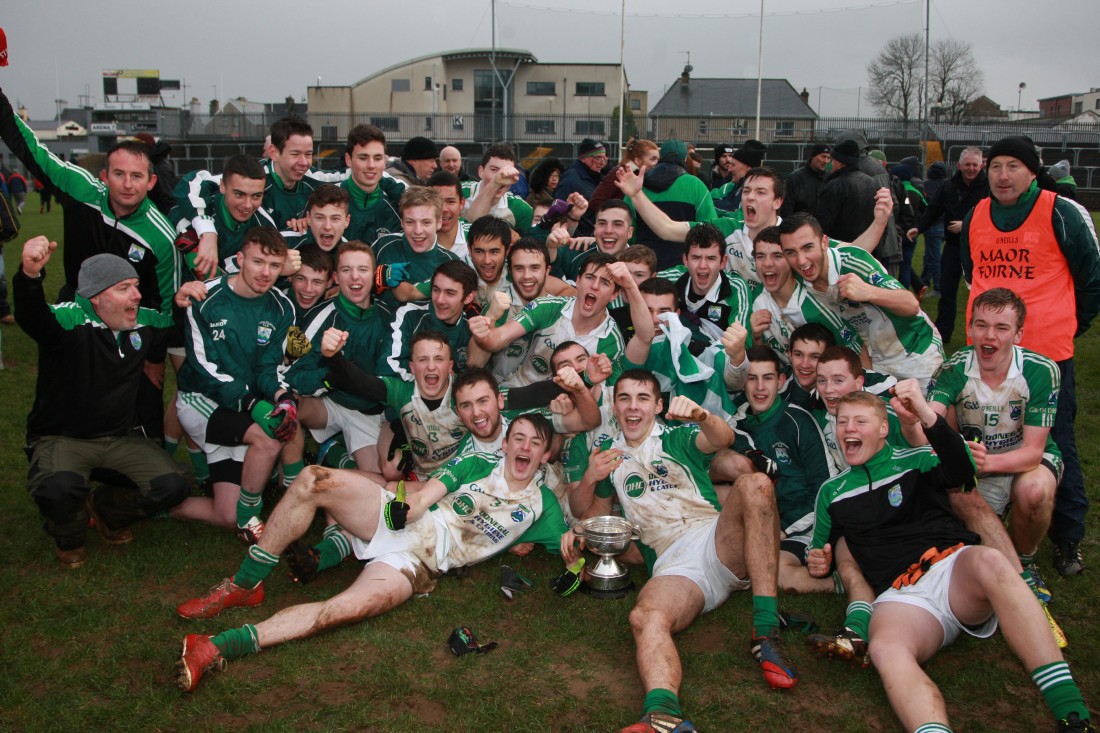 Gaoth Dobhair celebrate their win in the Minor Final on Saturday with their win over Dungloe/Na Rossa. Photo: Brian McDaid

GAOTH Dobhair turned in a storming second half to win their ninth Donegal Minor Championship title, and their first since 1999, in Ballybofey on Saturday.

That it came against their old foes from the neighbouring Rosses was the cheery on top of the cake baked by Tom Beag Gillespie. It was a victory that has been several years in the making, with the Magheragallon boys having won titles at under-14 and under-16 level in previous years.

The teams were level at the break, 0-4 apiece, but Gaoth Dobhair kicked on in the second half to score a deserved win.

For the Dungloe/Na Rossa amalgamation it was a disappointing hour and one they’ll look back on with plenty of ‘what ifs’. 2014 has been the first year of the joint venture in the Rosses and, having won the Southern Minor title, hopes were high that they could rekindle the glory days of the Rosses Rovers from the 70s and 80s.

But it was the well-oiled Gaoth Dobhair who came good at just the right time.

County minors Gavin McBride (free) and Cian Mulligan swung over points at the outset of part two as they began to assert their dominance. Mulligan popped over after Dungloe/Na Rossa goalkeeper Danny Rodgers superbly denied Micheál Carroll at close range. Carroll dispossessed Matthew Ward and saw his powerful saved beaten away by Rodgers, before Mulligan drilled over the rebound.

A Ryan Greene free reduced the deficit, but Gaoth Dobhair slowly and surely turned the screw in those moments when Kieran Gillespie, Mulligan and captain, Niall Friel, started dominating the middle third.

Gavin McBride, another who was involved a lot in the second period, converted a free after Dylan Reilly was penalised for lifting the ball from the floor. Greene curled a free wide with a chance to cancel it out and their overall tally of eight wides, that included those of the scoreable variety, will surely sit uncomfortably with the Rosses contingent for some time.

As the third quarter ticked past, Gaoth Dobhair had really taken charge. Aodhán Ferry set Naoise Ó Baoill away and the diminutive livewire – who excellent throughout – slotted over before Gillespie opened up a four-point lead. McBride was blown up for overcarrying just when it seemed as if he was in for a goal.

By the time Dungloe/Na Rossa shook the heads clear it was too late. Seaghán Ferry had performed a sweeper’s role in front of Greene all afternoon and consistently mopped up stray balls into the Dungloe attack. But twice in a minute, Ferry got up to score and the deal was sealed when he put Gaoth Dobhair 0-11 to 0-5 in front.

Seam McMonagle’s final point of the day was just the second of the second half for Dungloe/Na Rossa and Gaoth Dobhair could rejoice soon after.

It didn’t seem so clear-cut at the short whistle when there was nothing to separate the sides. Locked on four points, it was actually Dungloe/Na Rossa who seemed the more likely for long stretches of the opening half-an-hour.

They had led 0-4 to 0-2, but they just failed on too many occasions with good chances that could have had them comfortable. McBride and Neely swapped points at the outset and there followed a 12-minute scoreless spell.

Gaoth Dobhair were playing with a jammed defence and space was at a premium for Dungloe/Na Rossa. In those moments when they could draw breath, they needed to make the most of it and they had appeared to be coping when Raymond Sweeney’s side broke 0-4 to 0-2 ahead by the 24th minute.

Goalkeeper Rodgers came up to slot over a free after Gaoth Dobhair captain Friel landed a fine point from the stand’s shadows. Neely and Darragh McGee put Dungloe/Na Rossa two in front and Gaoth Dobhair seemed on thin ice on a day when the terrace was out of bounds for spectators because of the icy conditions.

Gaoth Dobhair could feel the chill when Greene managed to get free of the shackles momentarily, but Charles John Doherty saved superbly. A goal then and Gaoth Dobhair would’ve been staring at the proverbial mountain, 1-4 to 0-2. With James Boyle and Ó Baoill on the mark, though, they were on an even-keel by the interval.

With their county minor contingent and next year’s county hopefuls starting to grow in influence during the second half, Tom Beag Gillespie’s men were on their way back to the Gleanntáin Ghlas Ghaoth Dobhair with a Cup in tow, bridging a gap that stretches back to Kevin Cassidy and company from 1999.

Their Christmas wish is that this was a glimpse into their future.