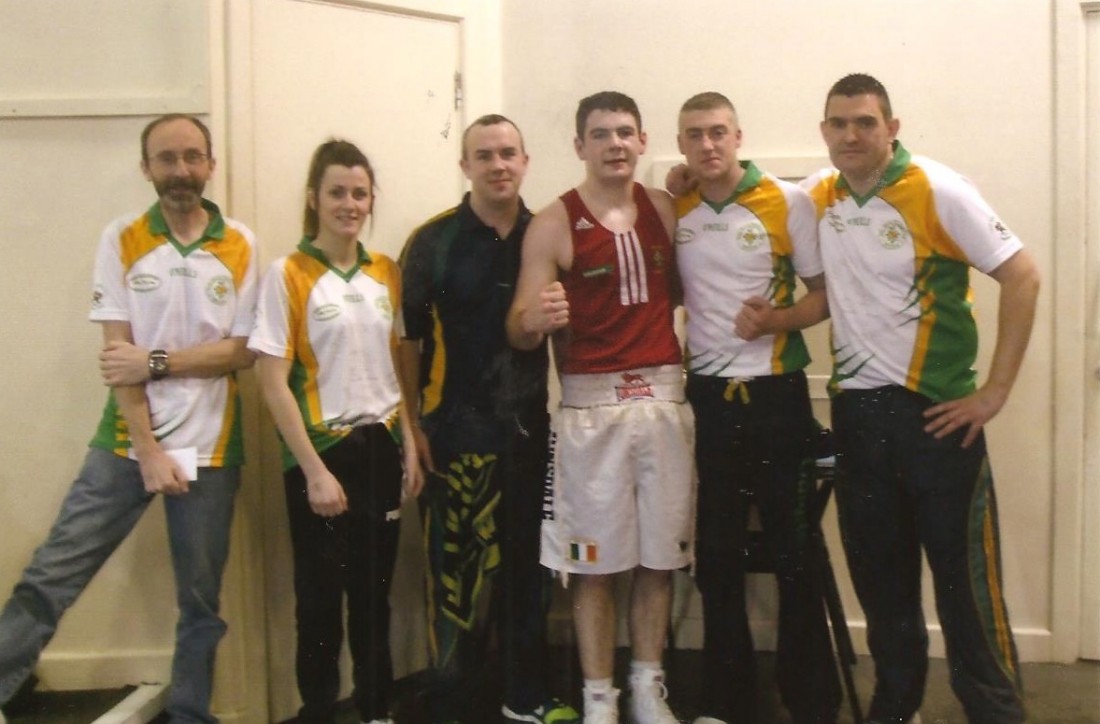 Paul Kelly, Twin Towns Boxing Club, with his coaches and team-mates after winning his semi final

PAUL Kelly (Twin Towns), Stephen Doherty (Letterkenny) and Bernie Stokes (Bluestack) are all chasing National Intermediate titles on Friday night at The National Stadium in Dublin when they line up in the middleweight, heavyweight and super-heavyweight deciders.

Kelly is aiming to emulate his Twin Towns BC club-mate Donna Barr, who last weekend scooped the women’s 50kgs contest thanks to an impressive final win over Kirsty McCarthy (Golden Cobra).

Kelly stopped Shane Egan from Bracken in the second round of their semi-final on Saturday and will now meet Ryan Dervan (Loughrea) in the final. The 22-year-old Ballybofey man is on the scent of his first national title hot on the heels of winning a gold medal in October at the Celtic Cup in Waterford.

Kelly was excellent in his triumph over Egan. In the second round Kelly really took charge, forcing the Dubliner onto the back foot. Kelly, with a firm right to the head of Egan, dropped his opponent. Egan survived the count, but when Kelly let fly again the contest was over and Kelly had advanced.

Kelly has also beaten Denis Ahern (Castlebar) in the preliminary round and Vladimir Beluski (Watergrasshill) on his way to the final.
In-form Letterkenny heavyweight Stephen Doherty is also gunning for a first national prize. The debutant puncher has beaten Michael Cummings and Conal Dillon on his way to a final against Patrick Ward (Gurteen).

Doherty had beaten Cummings to win the Ulster Intermediate title in October and he took that form with him to Dublin. He scored a 3-0 win over Carrickmore man Cummings in the national quarter-final and last week he was similarly impressive in his triumph over Dillon from Kinsale, the Letterkenny man taking the 3-0 decision and set up a final against Ward, who stopped Michael Frayne (St Mary’s) in the other heavyweight semi.

Bluestack man Bernie Stokes will line up against Portlaoise’s Robert Kraska in the super-heavyweight final. Stokes overcame Letterkenny’s Michael McConigley 3-0 in his semi-final on Saturday, while Kraska scored a 2-1 win over John McDonnell from Crumlin. Stokes, who is also chasing a first national title, opened up with a 3-0 win over Michael Kaliac of St Colman’s.

Two titles are already making their way back to Donegal. Illies Golden Gloves man Daryl Moran has been given a walkover at 48kgs, while Barr triumphed last weekend against McCarthy. Barr took the verdict 40-36, 40-36 and 39-37. She said: “The sparring I had with boxers from Antrim, Donegal, Derry and Sligo over the last few weeks was what gave me the upper edge in the championships.”

Barr attends the female training in Raphoe and another regular at those sessions, Emma McGlynn from Strabane’s Immaculata club, takes on Emma Agnew (Dealgan) in Friday’s 57kgs finals.

TG4 will broadcast the finals from 7.30pm.