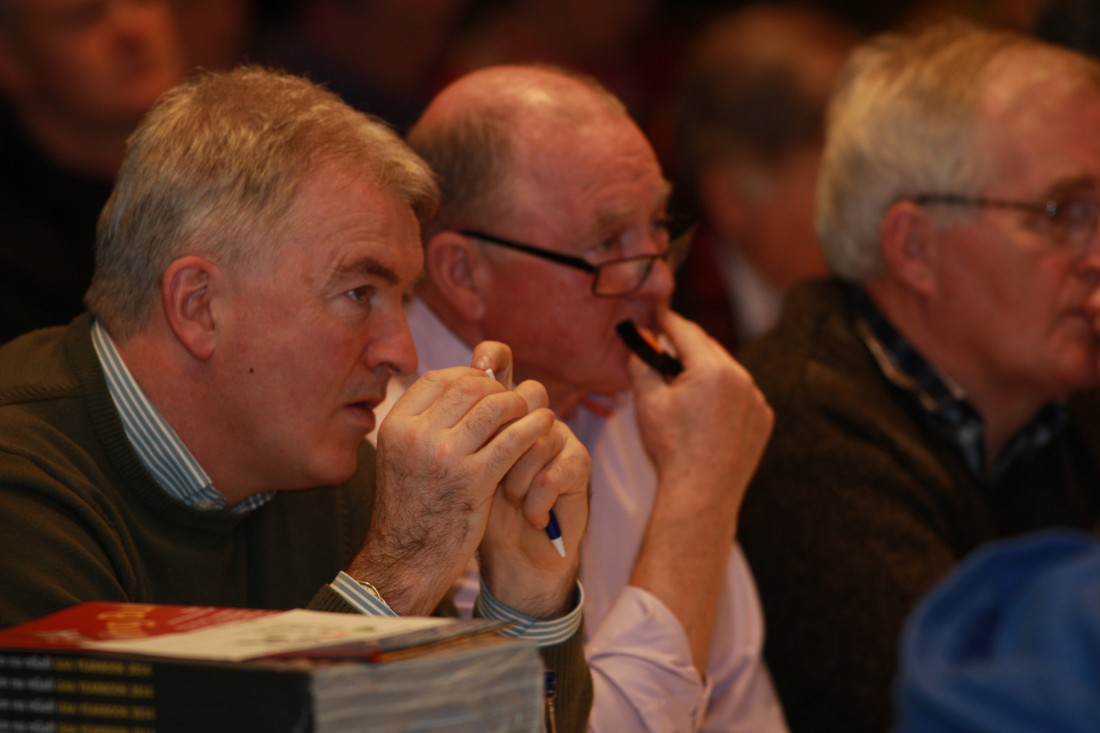 Paul Carr and Charlie McAteer from St Eunan’s Club at the convention at the weekend.

IT doesn’t feel as if it were ever any different.

During the course of last Sunday’s annual County Convention in the Abbey Hotel, club fixtures remained the big bug-bearer of both club delegates and County Board members: Too many of them at the wrong time of the year and not enough of them when the sun sits high in the summer sky.

The trouble with it again is that solutions don’t seem in plentiful supply.

In his Chairman’s address, Seán Dunnion suggested that a single Competitions Controls Committee (CCC) be set up in the county to oversee fixtures.

“A lot of our problems stem from the fact that we have too many individual entities making fixtures,” Dunnion said.

“With this in mind, it will be a priority in 2015 to begin a consultation process with the various divisional boards and committees that currently have a remit for fixtures with a view to having a proposal for a single CCC for the 2016 Regulations Meeting and 2016 County Convention.”

At present, the senior CCC, the Northern Board, Southern Board and Children’s Board all set fixtures. Given the success of the senior and minor footballers this summer, it was inevitable that there’d be a problem somewhere along the line.

That all of the county’s competitions will be completed this weekend is a considerable improvement on some recent efforts, but as Dunnion noted: “playing the finals of the club minor Championships in December cannot be allowed to happen again.”

The playing of the Donegal MFC so late in the year came in for criticism from the floor, with St Eunan’s delegate Paul Carr voicing concern, and Alan Boyd from Gaoth Dobhair outlined his club’s displeasure.

Due to the final of the Donegal Minor Championship only being played last Saturday, Donegal had no representative at the Ulster Minor Club Tournament in Belfast this year. “It is a shame that these young players haven’t had the chance to test themselves at the highest possible level for the club,” Boyd said, 24 hours after his club’s minors overcame Dungloe/Na Rossa in the final, playing in terrible conditions in Ballybofey.

The Minor Championship hit a roadblock when the Senior Championship kicked in a week after the All-Ireland SFC final, some county players taking to the club championship sod just six days after losing at Croke Park.

The Northern and Southern Board’s have different structures, with the Northern clubs playing in a round-robin format at the first round stage, whereas the Sourthern participants play a two-legged system. Right hand and left point in opposite directions from the outset.

It certainly doesn’t help when it comes to advancing the respective Championships.

The issue is nothing new, however. Back in 2007, then CCC secretary Edward Molloy, noted in his report to Convention that the Leagues were ‘nowhere near being completed’. By 2009, when Donegal reached the All-Ireland quarter-finals, Crona Regan reported a huge problem in finishing the Under-21 Championship.

To that end, the completion of the schedules prior to Christmas, given the success of the county sides, perhaps could rank as something of a minor miracle, given that, as the outgoing CCC Secretary, Seán McGinley mentioned in his report: “There are too many weekends in the middle part of the year lost without football.

“During the year a number of clubs expressed disappointment at the lack of games during July/August. This will happen when our county teams progress outside Ulster in the Championship.”

He reported a 41-week playing season in 2014. “When you take into account the pre-season, that makes it a full year,” he said.

“That is just too long. Hard decisions need to be taken.”

The problems weren’t just confined to Divisions 1 and 2, but Naomh Colmcille’s James Dowds complained that his club had gone eight weeks without a game while Naomh Ultan’s Terence McGinley outlined that it had taken 33 weeks to complete.

“You sit here every year hoping that it gets better, but it just gets worse,” Dowds said. His comment had the attendance nodding in agreement.

Burt delegate Damian Dowds said that the playing of midweek fixtures should be the elephant in the room, but Donegal’s clubs aren’t lured by the prospect of games outside of the weekends.

However, Dunnion has appealed to clubs to buy into the drafting of the Master Fixture List which will be due for ratification at the March 2015 meeting of the county committee in Ballybofey.

“We can all play our parts in developing a fixture programme that will give both our adult and underage players, hurling and football a clear and consistent programme of games for the season ahead,” Dunnion  said.

“‘We’ means the collective, that collective being the CCC, Children’s Board, An Coiste Íomana, the Divisional Boards and the club managers/officers.

“We all must take this opportunity and engage with the process constructively so that we can achieve a better outcome for our players in 2015.”

During the discussion on fixtures, Dunnion suggested that the issues needed ironed out in pre-season, ‘not week-to-week’. He said: “Clubs have a key role to play. Clubs aren’t happy to play sometimes unless it suits them.”

The CCC for next year will have a representative each from the senior, intermediate and junior grades, following a successful motion tabled by the Killybegs club.

The hope for the Chairman and the incoming CCC, led by Denis Ellis as Chairman and new Secretary Declan Martin, will be that the clubs embrace it better than they did Sunday’s Convention.

It was certainly regrettable that 18 places were vacant on the floor with some clubs not taking the full compliment of four delegates. At least one club had only one representative. The least candidates deserve is the best possible chance of being elected and the failure of some clubs to ensure that they were best represented meant that some were denied votes.

When it comes to sorting the fixtures in the New Year, they ought to pay a little more attention to the important issues. Convention and a four-hour sitting in a Donegal town hotel mightn’t be too appealing – but clubs should at least ensure that they’re adequately represented.

When it comes to drawing up that master fixture list, those involved should perhaps heed the report of Central Council delegate Niall Erskine. “We should consult better and earlier with our club players in respect of any scheduling of our club championships,” he wrote.

“There is plenty of anecdotal evidence that most clubs did not consult with their club players prior to agreeing the scheduling of last year’s intermediate and senior club championships…All clubs should consult with club players and bear their thoughts in mind.”

CIERAN Kelly delivered a fine set of accounts for his first year as the Donegal treasurer. A profit of €242,281 for the year and a cash at bank figure of €289,449 certainly represent a good year’s work, helped undoubtedly by the senior and minor footballers winning the Ulster Championships and reaching the All-Ireland finals.

It is clear from the treasurer’s figures that the county teams are now operating in a different stratosphere altogether and it’s tempting to wonder if we’re nearing a time when players will no longer be able to combine club and county, going instead in the way rugby ventured some years back.

The days of a man lining out for Cork Con and Munster are from a bygone era; could the GAA be heading down the same path?

Something will have to give – and soon.

Donegal’s figures for 2014 are startling. Income totaled €1,647,884 and expenditure stood at €1,405,603. That wasn’t even to include the amounts, well in excess of €1million, that passed through the county’s hands for All-Ireland tickets.

Commercial income has now gone beyond half a million (€546,146) with royalties from the sale of merchandise now giving a large boost, to the tune of €136,713, to the books. Sponsorship is now over a quarter of a million €228,068, while the cost of running the teams is tipping very close to a million. Without a profit on the All-Ireland banquet of €64,067, the Team Administration Expenses (for all county teams) would be €995,721.

Proof, if it were needed, that this is now a big bucks game.