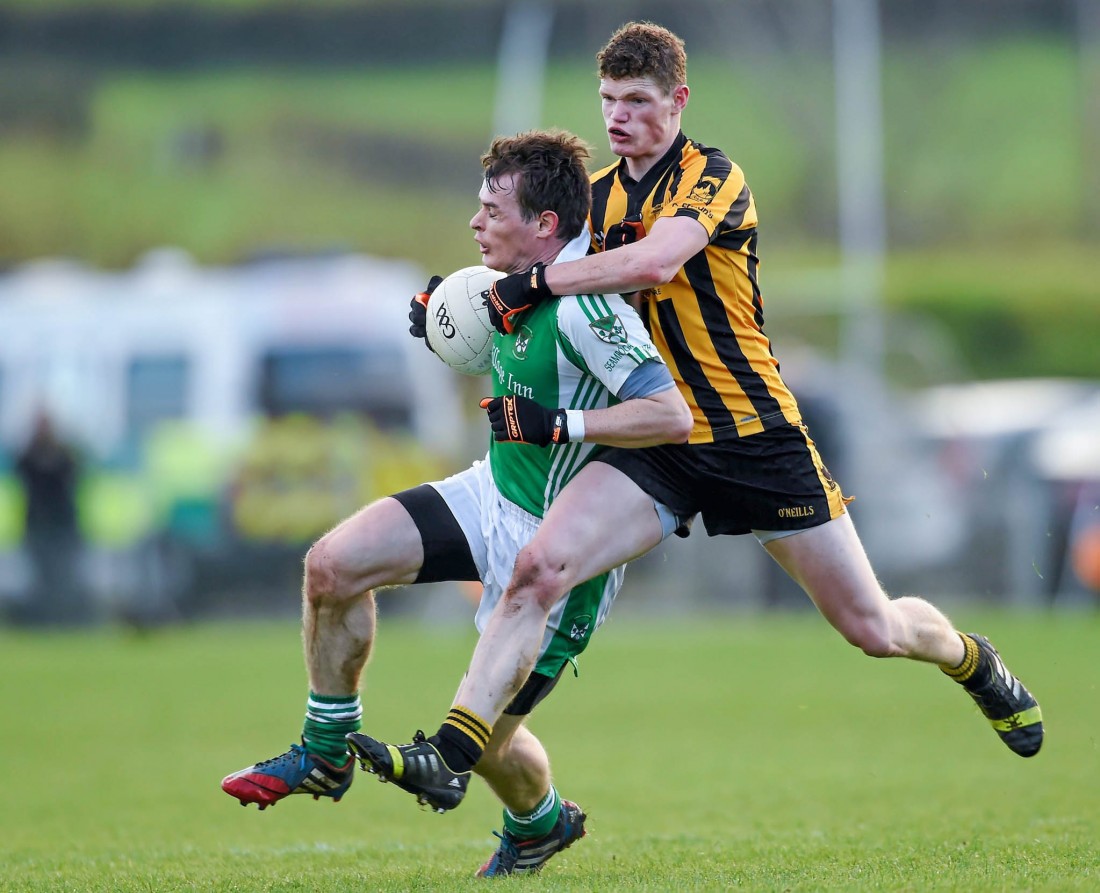 Peter Sherry, Roslea Shamrocks under pressure from Conor Morrison, St. Eunan’s. Morrison is expected to play in Sunday’s semi-final having been forced off injury in last week’s quarter-final.

For only the third time, St Eunan’s are in the semi-finals; the Letterkenny team has never contested an Ulster club final. Tyrone champions Omagh stand in their way, but Curran insists that victory is well within the grasp of the black and amber.

This will be the eighth weekend in succession for Eunan’s to be in Championship action. Two weeks ago they captured Dr Maguire for the 14th time following a Donegal SFC final win over Glenswilly, who were beaten in last year’s Ulster final, and on Sunday last they enjoyed a routine win over Fermanagh side Roslea, with Conall Dunne’s 1-4 securing a 1-9 to 0-6 win.

Omagh St Enda’s are Tyrone champions for the first time in 26 years and have just accounted for Ulster club kings Crossmaglen, but Curran believes that his St Eunan’s team can take the next step.

“I would go as far as to say that this is the biggest game in St Eunan’s history,” Curran says.

“St Eunan’s were in semi-finals before, I know. They played a Crossmaglen team six years ago that was in their pomp and, to me, this is a much better opportunity for St Eunan’s. It is an unbelievable chance for the players.

“It is definitely a game that is within our capabilities.

“We aren’t going with ‘confidence’ as such, but we are fully aware of the great opportunity that’s there for us on Sunday. Omagh are a very fine outfit with some top-class individuals. They’re like ourselves in many ways in that they have very experienced players who’ve had great success but at Ulster level are complete novices.

“They’re coming in off the back of a great win over Crossmaglen while we had a similarly great win last weekend against Roslea, albeit against a different standard of opponent. We are going in full of hope.”

Omagh are missing defender Conor Clarke, but can call on the experience and guile of the McMahon brothers, Justin and Joe. Conan Grugan is another member of the Tyrone panel, as is Barry Tierney – who netted a goal against Crossmaglen. Ronan O’Neill’s return from cruciate trouble last year was a huge boost for club and county and he is beginning to hit the high notes that had been expected of him before his knee buckled in March 2012. O’Neill scored 1-4 in the win over Crossmaglen and it was his injury-time goal that snatched victory from under the noses of Carrickmore in the Tyrone final.

They also had a late, late show in their county semi-final, when Jason McAnulla struck a goal against Dromore. McAnulla has flirted on the periphery of Mickey Harte’s squad of late and is no stranger to Donegal having played soccer with Swilly Rovers in the Ulster Senior League during 2008 before committing to Gaelic football.

St Eunan’s, though, enter with a useful concoction of their own.

Curran has reminded us time and time again about the influence of his experienced players like captain Rory Kavanagh, Conall Dunne, Kevin Rafferty and John Haran, whose prints have been all over the campaign.

Dunne’s 1-4 was key last Sunday, but the tireless work off the ball by the former county player was every bit as important.

Curran shuffled the deck for the Roslea match in replacing Sean Daffan with Shaun Patton in goals and that position is perhaps his only dilemma this weekend with the rest of his team now having a pretty settled look to it. Conor Morrison has recovered from the knock that forced him off last Sunday and can be expected to retain his place in the starting XV.

Cillian Morrison came in for his first appearance for the St Eunan’s seniors since 2010. Having played for the Donegal Under-21s that year, Morrison has played soccer in the League of Ireland with UCD and Cork City, whom he is now attached to.

Curran said: “Cillian has been remarkable for us since he came back in. He hasn’t played in four years but his touch has been impressive, his handling has been impressive and his ball skills are excellent. It’s a big plus to have Cillian back in the squad. It’s just maybe unfortunate that we didn’t have him a month earlier to get a few more games under his belt.”

Eunan’s were dominant in the first half last weekend and led by eight, 1-5 to no score, at the changeover.

They could, and perhaps should, have been out of sight altogether by then, but it was Dunne’s goal from a penalty that gave them that cushion.

Curran said: “We should have been further in front. It probably was a wee bit disappointing that we didn’t kick on with a few more scores and we weren’t as efficient as we’d like to have been. We were probably taken aback by how defensive they were. Still, we kicked three or four bad wides that we shouldn’t have.

“We did the same in a couple of the Donegal Championship too and that has probably held us back a bit, but we’ve been doing enough to get over the line.

“The boys were in a bit of a comfort zone at half-time. Look, any day you’re 1-5 to no score up at half-time is a damned good start. Maybe they didn’t feel they had to drive on at that stage and it was their seventh week in a row out on the field so there was obvious fatigue going to set in. We took the foot off the gas at a stage where we were in comlete control.

“Roslea didn’t score until about the 40th minute and they didn’t score from play until the 54th minute. We weren’t under any pressure. You want to be gung-ho all the time, but sometimes that isn’t practical and we were comfortable on Sunday. There’s no game where you’ll get a high tempo for the full 60 minutes.”

All week he’s been hammering home the sense of opportunity to his players. Now it’s up to them to grasp it.