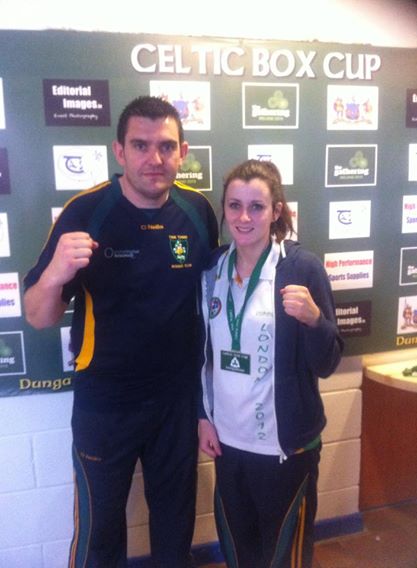 Donna Barr fights in the Intermediate final on Saturday. She is pictured here with Shane McHugh, Twin Towns club coach

The Strabane woman meets Kirsty McCarthy (Golden Cobra) for the 50kgs title. A previous winnerr of the national novice intermediate crown and an under-21 title, Barr scooped a silver medal at the recent Celtic Cup in Waterford.

A handful of Donegal boxers are in men’s semi-final action earlier on Saturday.

Defence forces champion Boyd from the Convoy club is in hot form of late and he meets Annagry native McBride, now boxing out of the Corrib club in Galway.

McBride is the man who fought Jason Quigley in the Golden Boy’s first-ever fight when he was just seven years old (Quigley won that bout).