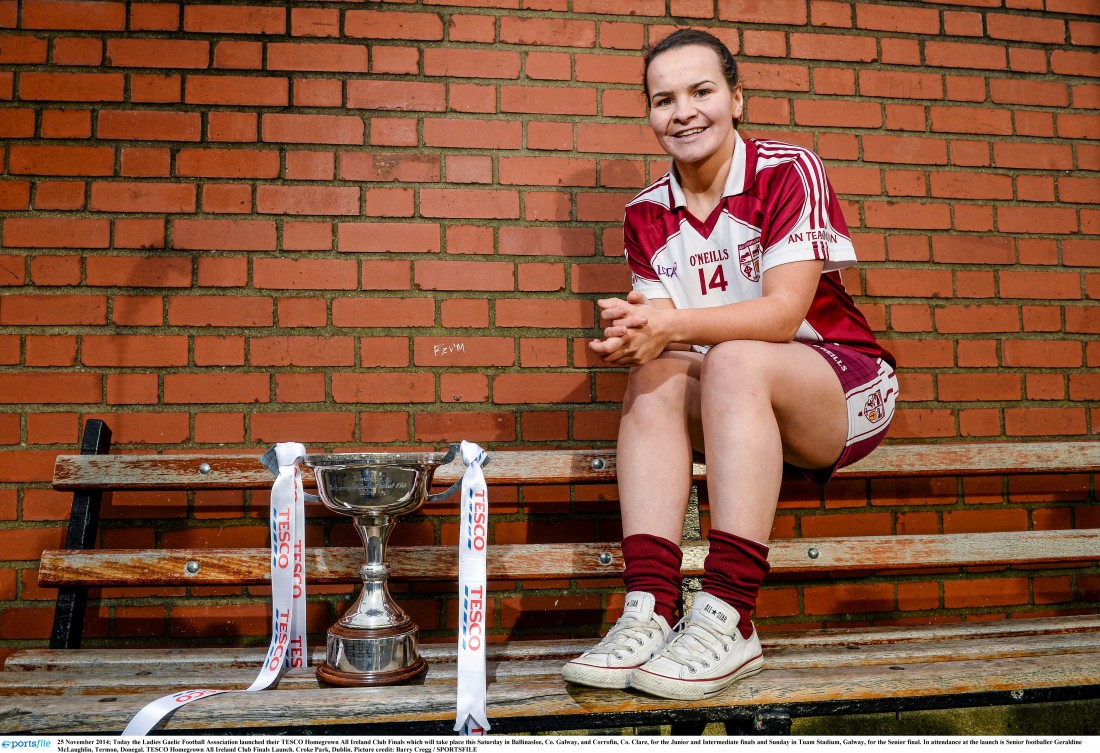 ONE evening not long after the turn of the Millenium, Harry McGlynn was on a trawl of the parish in search of players for the newly-formed Termon underage ladies squads.

Termon’s ladies set-up came into being in 1992, formed by James Harkin and Seamus Friel, but in those days they had only a senior team. Resurrection brought with it a top-to-bottom overhaul and McGlynn was doing his rounds drumming up the numbers. The story goes that a knock on a door in Clonkillymore drew a surprised reaction from Bríd McLaughlin.

“Harry called to the house one day and asked if any of us would play, but I think Mammy laughed and said: ‘You’ll do well to get a footballer out of this house’,” recalls Geraldine McLaughlin as she prepares to captain Termon in Sunday’s All-Ireland senior club final against Mourneabbey in Tuam.

“Mammy was right for a while, too. I wasn’t much good. I used to just run with the ball; I didn’t even solo it.”

McLaughlin worked hard on her game and has risen from those days to become one of the most feared forwards in the game.

To date, she has blasted a stunning 22 goals and 27 points for Termon in Championship football: 5-3 against Moville; she plundered 3-10 in Glenfin; another 5-3 was blasted past Newtownbutler; 3-4 against Castlewellan fired Termon to the Ulster final; a clinical 4-4 was crucial in the Ulster final against Donaghmoyne; and her 2-3 helped steer Termon over the line past Kilkerrin-Clonberne in the All-Ireland semi-final.
McLaughlin’s relaxed as she shoots the breeze on All-Ireland final week.

“We’re ready for the game,” she says.

When she first lifted an O’Neills competitively it was under the tuiton of Christy Gillespie, at the time headmaster at Termon National School. A former Kilcar and Termon player he, like McGlynn, was instrumental in shaping the careers of a special group of girls who stand now an hour from answering history’s call.

“A lot of this group of players go back to primary school and playing under Christy and then under Harry,” McLaughlin says.

“We played football at school every single day. Christy would have come out to us through break time and he’d have been showing us what do do and the next day checking that we were doing it right.  It should have been homework.”

Those days forged friendships that have remained. McLaughlin, her sister Nicole, Dara Kelly, Niamh Friel, Roisin Friel and Roisin McCafferty have been best friends for their lifetimes.

“We’ve always been so competitive with each other,” McLaughlin says.

“It’s always been that way, even from school. When we’d have been in the back garden, the games would have been like a big final – you didn’t want to lose.

“It’s hard to beat a team that is gelled and bonded like we are. I’d die for any of those girls and I know they’d do the same for me. You can’t buy that. Other teams we meet might be better players or whatever, but they won’t have the heart and determination that we have.”

This group of Termon players, spearheaded by the deadly McLaughlin has won a staggering 21 Cups in the last five years. Theirs is a remarkable haul of honours. There’s one missing from the sideboard, though.

“I think we’d trade the other 21 for this one,” McLaughlin says.

Her first taste of the big time was when she was ten. It was half-time in the All-Ireland semi-final between Tyrone and Kerry and she was selected to play in the Cumann na mBunscoil half-time game for Tyrone. The big stage beckoned from a long way out and the 21-year-old has no end of big-game experiences.

She’s no longer a secret weapon and finds herself with plenty of the opposition for company no matter when she turns out. It’s not too uncommon to find McLaughlin with a handful of markers these days – but she’s so far managed to keep on keeping on.

“Ah, I’ve got used to it,” she modestly muses. The key rests in their preparation at The Burn Road.

“We prepare well in training and I get battered in training! You can’t go down crying at our training and you don’t have much hope of getting a free. It’s a true saying that what happens in training will be replicated in matches. We’re all very comfortable with what we’re at. We’ve planned so well. With us, everyone is comfortable on the ball – it doesn’t matter who’s on it.

“We train hard in training and I get good competition there. The likes of my sister Nicole, Emer Gallagher, Therese (McCafferty) and Maria (Carr) are never far away. Mostly it’s Emer and Nicole and sometimes they’ve to take Emer off me as we’d get a bit too competitive! Emer is playing brilliant at the minute. In all the years I’ve played with her, she’s definitely playing her best football this year.”

A student at Sligo IT, McLaughlin is also an accomplished soccer player and last year represented Ireland at the World Student Games in Russia and also played Futsal at the European Universities Futsal Championships in Spain. She’s worn the green of Ireland at international level, too, and played in the Women’s League with Castlebar, who came calling again in August: “I just couldn’t commit to them.

“It’s the same at college. The college has been very understanding and they know that I want to give 100 per cent to Termon. I explained to them at the start of the year that I wanted to give everything to Termon and they were great about it.”

She has two All-Ireland titles to her name already in 2014 – the Colleges Intervarsities with Sligo IT at soccer and the All-Ireland Comortas Peile na Gaeltachta with Termon.

For McLaughlin and the young Termon pack, the turning point came in a Gaeltacht final in 2010 when they got one up on Glenfin.

“They were a team that there was a bit of fear of once we crossed the line,” McLaughlin says. “We couldn’t seem to get over them, but that day we won in the Gaeltacht in 2010 we knew then that we could compete with them.”

From there, their story has spiralled to the ultimate game this Sunday in Tuam.

Harry McGlynn did just fine with that knock on Bríd McLaughlin’s door.