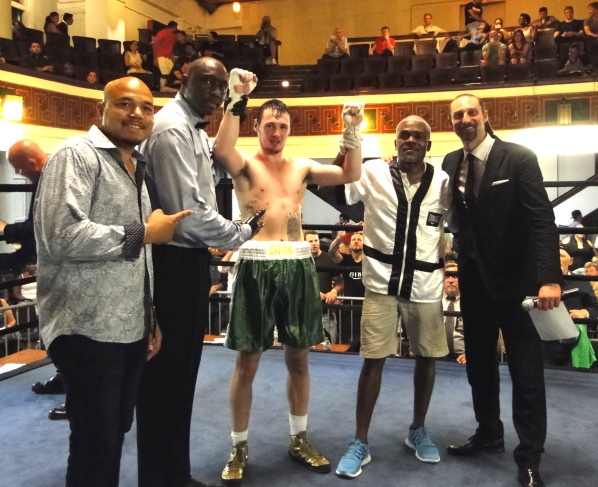 Darren Mangan following his win in September in New York

LETTERKENNY welterweight Darren Mangan (1-0) has decided to part ways with Uprising Promotions in New York to relocate back to Ireland.

He won his first professional bout when he defeated Kashif Muhammad at the Brooklyn Masonic Temple in September having signed with Uprising in June and he had been training under Colin Morgan in the Big Apple.

However, Mangan has taken the decision to return home.

“Unfortunately in life some things don’t work out,” said a message on his official Facebook page.

“I’ll be parting ways with my team over here in the States. A huge thank you to them for the belief they’ve bestowed in me and some time in the future I will return. The opportunity that’s presented itself to take my career back home for my immediate future is one that I’ve mulled over in my head over many sleepless nights, but I’ve got to do what’s best for myself and my career.

“I really look forward to the exciting times that lie ahead. The year plus spent out here has been massive in terms of learning experience and improvements to my entire game, working with the best in the world.”

Mangan, a four-time Ulster champion in his amateur days, is now said to be ready to link up with ‘The Breen Team’ –  John Breen’s stable in Belfast.

Mangan said: “Exciting times lie ahead and it will be great fighting back home. To be able to fight in front of all my Irish support, especially Donegal, is going to be amazing. I’m still recovering from a niggling injury whilst doing what I can to keep ahead of the pack.”

Mangan is a native of Castlebar who had lived in Letterkenny for seven years before moving to America. His family live in Letterkenny and Darren boxed for Finn Valley ABC and Letterkenny ABC.