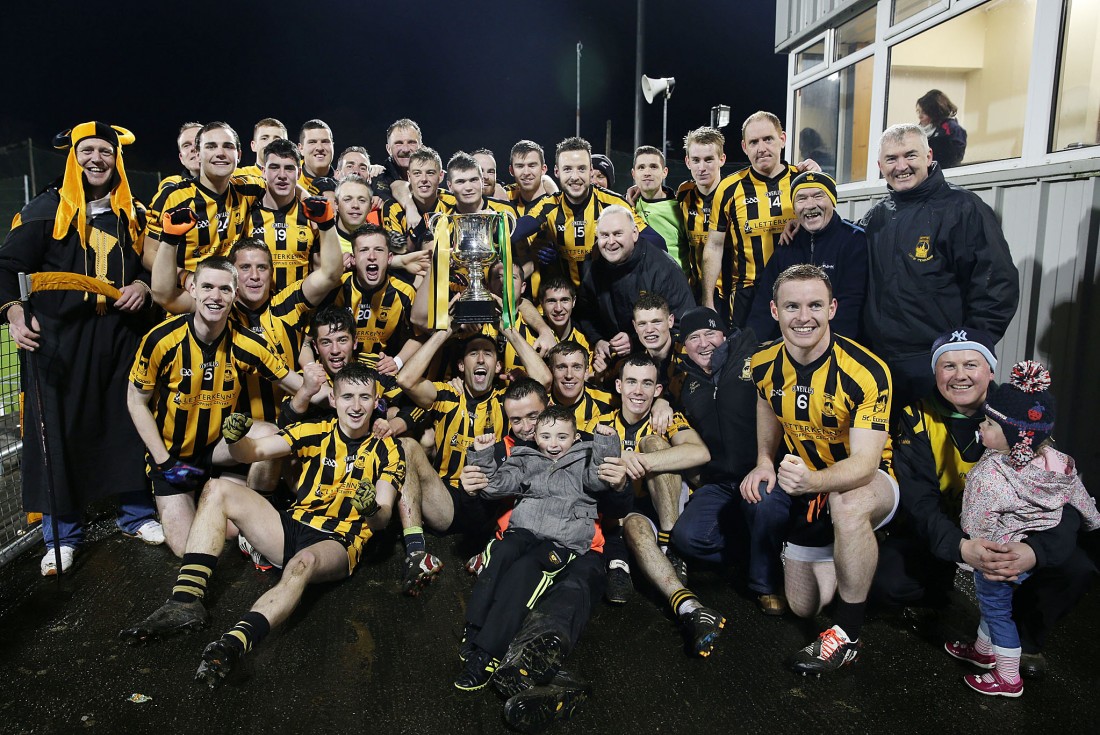 Lee McMonagle’s goal secured a 1-10 to 0-10 win on a day when the black and amber used four players – Oisin Carr, Jordan McBride, Conor Morrison and Michael Miller – who were in their Leaving Certificate year at St Eunan’s College.

Since Eunan’s ambled out of the 2013 Championship, letting Dr Maguire slip away following a timid loss to Malin in a quarter-final in Buncrana, there were signs that the Letterkenny side had lost its magic.

In an hour of need the St Eunan’s hierarchy turned to Curran, who became the first manager from outside the club’s membership when he was handed the reigns on January 7th.

He made no bold promises in those early moments, publicly or privately.

As the biggest club in Donegal by some distance there comes with St Eunan’s the notion of a bottomless pit of players at Sallaghgraine.  Their numbers might be bigger than others – but that doesn’t necessarily mean it has been an easy ride for the newly-crowned county champions

“This is a new team,” Curran said in a howling wind a The Bridge in March.

“St Eunan’s, in a lot of peoples’ eyes, have an endless amount of talent. They do have a lot of talent, but St Eunan’s have lost a lot of players too.

“The fellas with all the medals are the wrong side 30 or very close to 30. There is a big gap because the next group are all in their early 20s. “There is a huge generation gap.”

Curran talked about putting the young players in the right frame of mind ‘for down the line’.

The Downings man might well have been cleverly playing down his team’s chances – and through the year few outside their own people talked of St Eunan’s as potential champions – but, eight months on, his comments are worth considering in the wake of their 0-9 to 0-6 win over Glenswilly in Sunday’s Donegal SFC final; a victory that secured a record-equalling 14th county title.

Of the Championship-winning squad from 2012, ten weren’t available last Sunday. There are others, too, who could be and would be available for differing reasons – but the thing about St Eunan’s missing links is the calibre.

Ross Wherity was one of the few success stories of Donegal in 2013, scoring a goal against Tyrone in the Ulster Championship. By the time this season rolled around, Wherity had upped sticks and headed to New York.

Ciaran Greene was Man of the Match in the 2008 county final and spent some time on the Donegal senior panel, but London is home these days, while Peter Devine also has London as his address, he too having played in the 2012 county final.

Dualtach Molloy was a star of Donegal’s minor team in 2006, but the lights of London sparkle before his eyes each morning these days. Molloy’s was a precocious talent when he was breaking through, but is another of those of that ‘lost generation’.

In 2007, Paul Thornton captained St Eunan’s College to a MacLarnon Cup win, but injury has left him, still only in his mid-20s, in the ‘former players’ bracket.

There are others, like Packie Kennedy – who was on a Donegal under-21 squad – who headed to college in Wales, then moved ship to America, or take Gearoid McGinley, no longer playing but once a member of the same Buncrana Cup team as Eamonn Doherty, so influential in Sunday’s final.

McMonagle scored a goal in the 2012 county final win over Naomh Conaill and also netted a penalty in Curran’s first game, that Division 1 win over St Michael’s in March. He has pulled out of the panel since, as has Conor O’Donnell, one of the club’s most promising youngsters, who opted to step away during the summer.

Mark McGowan had announced retirement last December, owing to a hip complaint, but the injury-plagued 26-year-old has returned and played 50 minutes of Sunday’s final. Injury, though, stunted the progress of Oisin Carr and Cormac Coghlan, ‘who played significant roles for us in the League’ Curran says, and kept them out of the Championship. 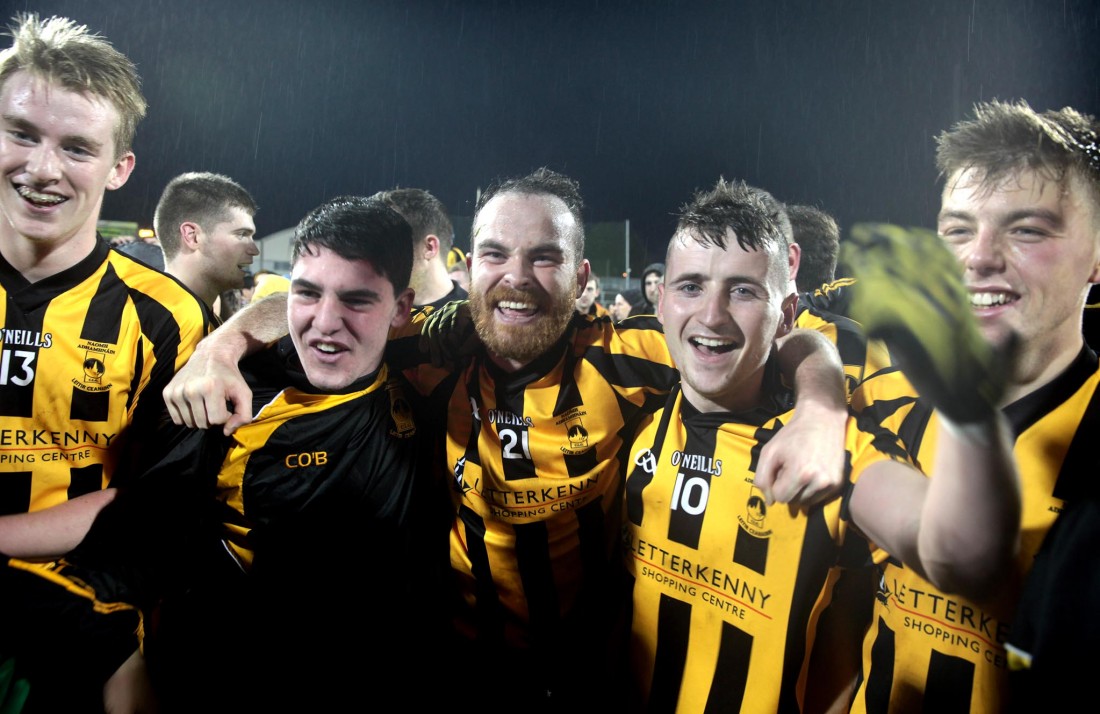 Cillian Morrison played a cameo role in the reserve final on Sunday and it is sometimes forgotten, both in terms of St Eunan’s and Donegal, that Morrison – now on a contract at League of Ireland side Cork City – was the man who won the penalty Michael Murphy hit the Breffni Park crossbar with in the 2010 All-Ireland Under-21 final.

Curran considered the dearth of players between 23 and 29, but the lure of the black and amber still proved attractive. He rebuffed approaches from two other Division 1 clubs and was already the Donegal Under-21 manager.

“I knew there was something there in St Eunan’s,” he says.

“I knew that the talent was there, first and foremost. I knew it would be an easy job. I don’t mean ‘easy’ in that I’d arrive in and we’d be winning Championships – but easy in terms of the type of fellas I’d be dealing with, the character of them.

“I knew that they were an honest bunch and I wouldn’t have discipline issues. I knew they’d give their best and I wouldn’t be running after them fighting with them to play. It was going to be a nice level with good players – not a babysitting job.

“I wasn’t necessarily going in with the expectation that we’d win the Championship and I wasn’t afraid of losing.

“At the same time, I knew all along that there was a Championship in them. With the players who were there and the attitude they had, of course they were capable. We knew it wasn’t exactly beyond us. At a club like St Eunan’s, you have to be ambitious. Why couldn’t they?”

St Eunan’s have competition from other sports to a level no other club experiences and being in Letterkenny means they’re also in a unique geographical position. John Haran talked on Sunday about how much it meant to defeat Glenswilly, their fierce cross-parish rivals, who took the title off them a year ago.

As well as the ‘noisy neighbours’, St Eunan’s also have the raucous room-mates, Letterkenny Gaels, within the town to contend with. Theirs is a unique position within this county’s boundaries.

Curran was aware that his appointment would cause a stir in some corners of the club, but it was just what O’Donnell Park needed.

He says: “Every club in the country has politics and strong personalities who are trying to steer things a certain way. I was fortunate when I came into St Eunan’s that I had none of that going on. I was coming with no baggage and on a clean slate. I think St Eunan’s needed a fresh voice too.”

First thing for the new man was appointing a backroom team he could trust and one that showed his new bosses, and the curious supporters, he meant business.

One of his first calls was to Vincent McGlynn.

“Vincent epitomises all that is good about a GAA club,” Curran says. “He is one of the most selfless individuals you’ll meet. You have people like that in clubs –  Paddy McBride in Downings is the exact same – who just give basically their whole lives to the club. They don’t always hold positions and they don’t look for the limelight or credit. Those people make the GAA club what it is. I needed Vincent on board.”

Pat McNabb worked at Eunan’s with Eamon O’Boyle last year having had a spell as the manager of Sean MacCumhaills: “He was there anyway and the players had a good word on him, so that decision was easy.” Ciaran O’Donnell, ‘a very positive man who’s St Eunan’s to the core’ joined the ticket and Noel Ferry was recruited to look after recording games.

With the Club Championship parked until Donegal’s involvement in the All-Ireland Championship was over, Curran knew his side could pace themselves early. In the early moments of the year, their work with strength and conditioning coach Neil Barrett was key.

“I think it’s very significant because we had only one muscle injury (a hamstring injury for Sean Hensey) all summer,” Curran notes.

“We took a very calculated risk early in the year, in light of the Championship being off until August at least – we decided that we wouldn’t train until June. From February to June, we worked on strength, mobility, agility. We concentrated very much on rehab and prehab. Neil played a huge role in all of that.

“I think the older fellas, in particular, reaped the benefits of that. It was a complete revolution, actually.” 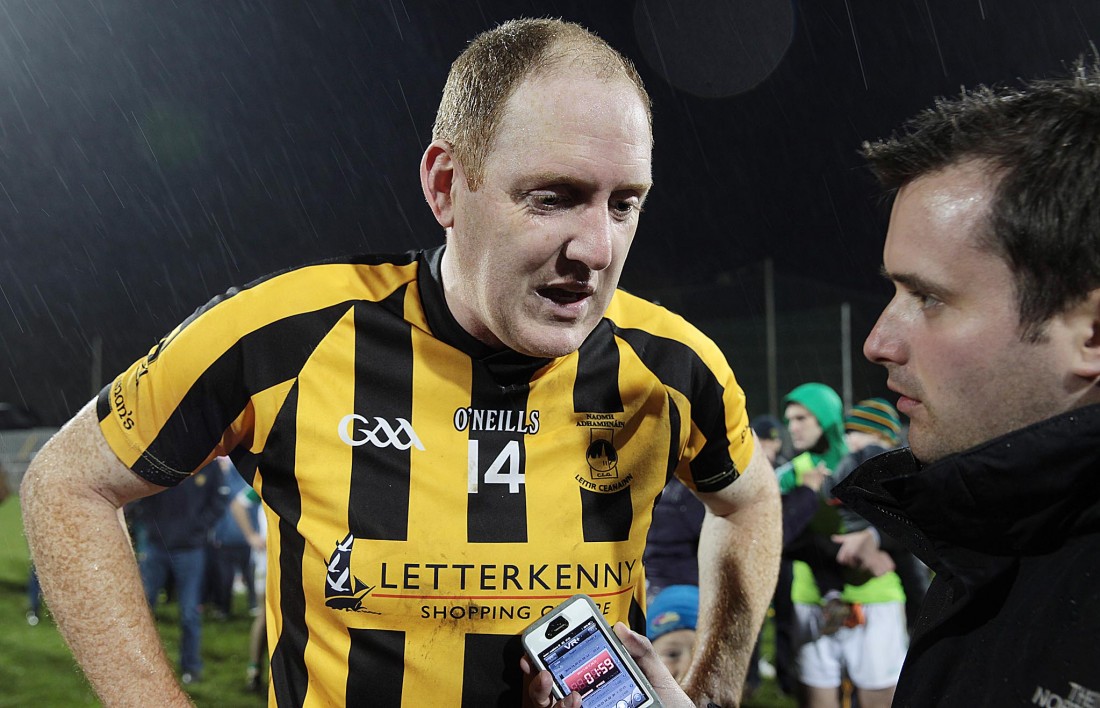 Man of the Match John Haran speaks to Chris McNulty after Sunday’s game.

Haran had been sought out early and the veteran gave a timeless performance on Sunday that won him the Man of the Match award. Perhaps it was even the big man’s finest hour in the club colours.

Curran has made a point of mentioning the influence of his experienced lieutenants, none more evident than Rory Kavanagh, named by Curran as his captain.

“I never had a doubt who the captain would be,” he says.

“Rory has an uncanny ability to influence the game when it’s most needed. He was awesome for us. His ability to manage a game on the field is unreal and his football knowledge is so important. He gets on the ball when he’s needed.”

Eunan’s moved up the gears in the Championship, but it was only in the later weeks that they were talked of as contenders. A 2-9 to 1-12 draw against Kilcar on May 11 was, for Curran, the first sign that he could be onto something.

He says: “We prepared for it like a Championship game. We identified that as a key game. We knew to be Championship contenders that we’d have to match the likes of Kilcar. We got a draw. They got a dubious point at the end and Conall went off injured. We knew then that we were closer than people were saying.”

The ‘new team’ passed its test with flying colours.