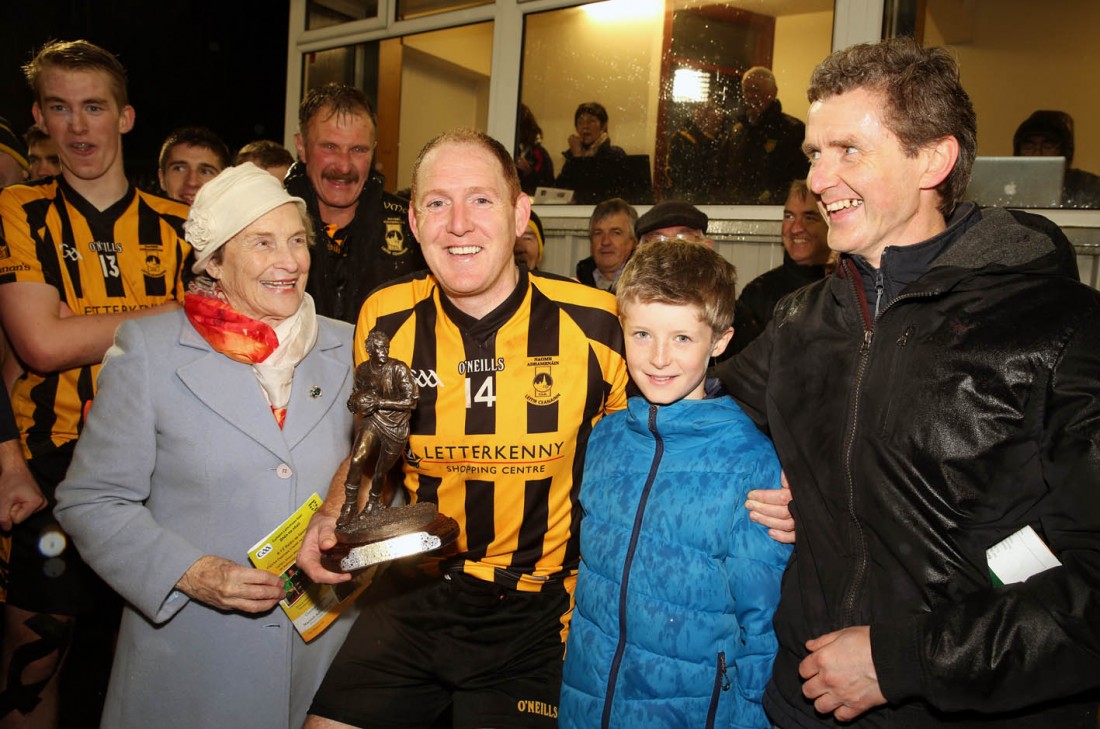 John Haran receives his Man of the Match award – the Peadar McGeehin Memorial trophy – from members of the McGeehin family on Sunday. Photo: Declan Doherty

Haran wears his heart on his sleeve and this win meant more than most others as Eunan’s prised Dr Maguire off their neighbours and rivals thanks to a tense 0-9 to 0-6 win.

Haran celebrates his 38th birthday today, but on Sunday he turned in a vintage display, winding the clock back with a performance that was enough for him to win the Man of the Match award. Getting the Peadar McGeehin memorial trophy will mean a lot to a man for whom St Eunan’s has been in his veins for so long.

Sunday’s was Haran’s 12th county final in the black and amber. Just four times he’s been on the losing side on county final Sunday, but his chances of getting back appeared distant when Eunan’s bowed out at the quarter-final stage last year against Malin.

In appointing Maxi Curran, the club hierarchy took the brave step of going outside the club’s membership for a manager. With Dr Maguire on the sideboard again, the decision has been vindicated.

“It’s unbelievable – Maxi is the man,” beamed Haran after his inspirational hour.

“He is the magician. When nobody else wanted to manage us he took on the job. He is absolutely brilliant. He is the man and now we are champions.

“When we started out at the start of the year nobody gave us a chance. For the first time in my 20 years playing with the club we ranked as outsiders.

“It’s up there with the first. The first one is always the most important, especially because we hadn’t one since 1983 and then we had ’97.”

The autumn of ’97 still hurts, St Eunan’s winning the final against Aodh Ruadh only to be stripped of their title in the boardroom. It’s counted on Haran’s winning list, though.

Officially, Sunday was St Eunan’s 14th tile, a win that sees them join Gaoth Dobhair at the top of the honours list in Donegal. This one meant a lot for Haran, embraced at the end by young son Ollie and wife Nicola. The couple have another child on the way so these are busy times for the Haran household.

The veteran had one of his finest hours in the club colours on Sunday. Danny Gillespie won eight SFC medals with Gaoth Dobhair in the 1930s and ’40s, while St Joseph’s duo Brian McEniff and Seamie Granaghan won eight in the ’60s and ’70s. The record books might officially disagree but Haran’s own mind tells him he has eight to his name.

He said: “It is brilliant to be champions once again after playing against and beating the reigning champions with two All-Stars, Neil Gallagher and Michael Murphy.

“I couldn’t believe when after ten minutes Maxi said to me: ‘Mark Neil Gallagher’. Imagine me at 38 marking an All-Star it is not easy – but I did and we grounded out the result.

“It was a tough tough game, but we had confidence in our own fitness and in our own legs and Maxi had the system. The boys were composed on the ball though I thought we gave away a lot of ball in the second half and we shouldn’t have.

“We got over the line. I thought Rory Kavanagh was brilliant in the last few minutes fielding those big high balls back in our own goal area.”

Haran, Kavanagh and Conall Dunne were instrumental in the win – as was centre-back Eamonn Doherty, who had a superb game.

Haran said: “Eamon Doherty marking Michael Murphy not an easy job. But fair play to him he stuck to the task and I thought he had a good game.

“Fair play to all the boys, they all played well and it was a mighty team performance.”

Three Dunne points and two by Conor Gibbons helped Eunan’s lead 0-5 to 0-4 at the break. They held that advantage during the second half. Glenswilly hit just one score from play during the game, from Brian Farrelly in the 27th minute, and for Eunan’s the prospect of losing to their fierce cross-parish rivals seemed unthinkable.

“We had a tough year listening to Glenswilly who were great champions,” Haran said.

“They are our neighbours and they raised the standard to an unbelievably high level. We had to match it. They won it last year and they reached the Ulster final. We had to listen to all that, but it’s part and parcel of it.

“That was the challenge – they laid it down and we had to rise to it. Thank God we matched them today and came out on top.”

Kavanagh clasped hands on Dr Maguire and called Brian Kelly up to lead a rendition of ‘Letterkenny Town’. They danced a victorious jig and beckoned their experienced number 14: ‘One more year, one more year’.

Maybe, just maybe the final chapter hasn’t yet been penned.

Roslea await them on Sunday in an Ulster club quarter-final.