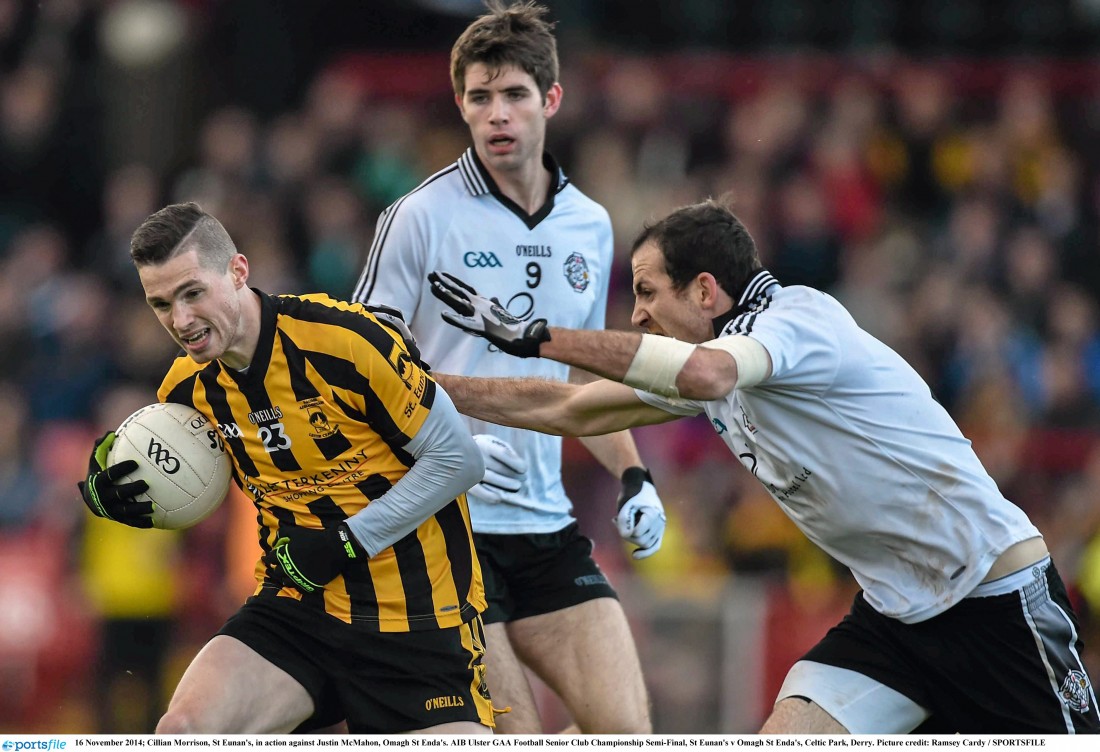 ON an afternoon of wafer-thin margins, Barry Tierney’s first-half goal fired Omagh St Enda’s through to their first-ever Ulster senior club final and left St Eunan’s with that nagging, haunting feeling of emptiness.

Playing their eighth Championship game in consecutive weeks, St Eunan’s looked at times like a side inhibited by their hectic scheduling, but Maxi Curran’s men were in the hunt right to the bitter end.

With the game clock in red time, the black and amber hearts skipped a beat when veteran John Haran played through a needle’s eye to set up Cillian Morrison. Haran’s fisted pass made the chance, leaving Omagh’s rearguard momentarily stunned and Morrison with a chance to rewrite history.

Morrison’s effort was tantalisingly close, but he was just off target. Morrison was a surprise starter, thrown in for his first Championship start since 2010. Now the books of League of Ireland Premier Division club Cork City, Morrison switched codes four years ago when he took up a soccer scholarship at UCD.

He made a dramatic impact in the All-Ireland Under-21 final the same year, setting up Leo McLoone’s goal and winning the late penalty from which Michael Murphy rattled the crossbar.  Here, he showed no signs of a man who has been out of practice with the O’Neill’s. Morrison scored two points and was a lively, energetic threat for the Letterkenny men.

Tierney’s goal came six minutes from the end of a tight opening half and it enabled Omagh to stay in front until the close of play, even though Laurence Strain’s team were scoreless for 23 minutes in the second half.

When Omagh lost Joe McMahon to a dead leg midway through the second period the Tyrone champions looked in trouble with Rory Kavanagh and Kevin Rafferty getting on top around the midfield in his absence.

But St Eunan’s just couldn’t summons something to get back on an even-keel again.

Justin McMahon, Jason McAnulla and Ronan O’Neill were all involved in the build-up. Tierney allowed ‘keeper Shaun Patton to advance and while the youngster got a strong hand to the shot, Tierney got enough behind it to send it to the net.

It was a case of third time lucky for Omagh, who were denied by Patton twice beforehand.

Tierney was thwarted just two minutes before his goal. Connor O’Donnell played in corner-back Stephen Mulllan and after breaking the line he slapped dangerously across goal where Tierney flung himself goalward at the far post, but Patton made the block.

Earlier, Patton superbly saved from Cormac O’Neill, who looked odds-on to goal when he was played in by Aaron Grugan. After a brilliant move that had Omagh at their devastating attacking best O’Neill pulled the trigger, but Patton’s shield deflected the bullet, the goalkeeper stretching to turn it around the post.

It was a pulsating start with the teams level three times in the opening ten minutes.

Ronan O’Neill swung over two classy points for Omagh who also had the marauding Conor McMahon on target with Morrison on the mark twice and Conor Gibbons getting on the scoresheet for St Eunan’s.

A brilliant Connor O’Donnell point from the right flank was cancelled out by an ice-cool free off the right boot of Rory Carr, who sailed over effortlessly from 43 metres.

A free from Conall Dunne shook St Eunan’s heads clear after Tierney’s goal but a huge effort by Ronan O’Neill, from a next-to-impossible angle on the right, gave Omagh a 1-5 to 0-5 lead at the break.

Seventy seconds into part two, McAnulla drilled over to put St Enda’s four up, but there followed a barren spell.

By the time they next scored, through Conor McMahon in the 54th minute, they were still in front – but only just.

Kavanagh hit a clever point under pressure and when points from Sean McVeigh and Conor Morrison followed there were signs that the tide was turning. Omagh got just the tonic when, from a short kick-out by Ryan Clarke after Morrison’s score, they worked up for Conor McMahon to score a steadying point.

Eunan’s could have been level, but the officials – after a lengthy period of discussion – scotched a ‘point’ for Cillian Morrison that was originally given by the umpire. After consulting with linesman Barry Cassidy, who would’ve had a perfect viewpoint, referee Noel Mooney went back to the men in white coats and a black mark was put though Morrison’s kick.

St Eunan’s survived in the early moments of the second period when Omagh got in for another goal chance. McAnulla set up Ronan O’Neill, but his shot was hacked from the goal-line by Darragh Mulgrew.

O’Neill is one of Tyrone’s bright talents and he set up Conor McMahon for his third of the day a minute from time.

With Joe McMahon watching from the sidelines, having gone off injured, St Eunan’s were enjoying plenty of possession, but just couldn’t concoct the killer potion and they would end the day with 13 wides.

Both teams also finished with 14 players as Caolan Ward’s black card in stoppage time followed an earlier booking while Omagh midfielder Conan Grugan was given a second yellow card in the dying seconds.

In only their third ever appearance in an Ulster club semi-final, St Eunan’s suffered the same anguish befell their representatives of 1969 and 2008. Their wait for a final place continues.

“The scary part is that it’s an awful long journey to get back here,” said their manager afterwards.