RORY Kavanagh won Dr Maguire for the sixth time two weeks ago – and this one tasted sweeter than any other. The 32-year-old Scoil Colmcille schoolteacher was captain as St Eunan’s overcame Glenswilly to win their 14th Donegal SFC title. 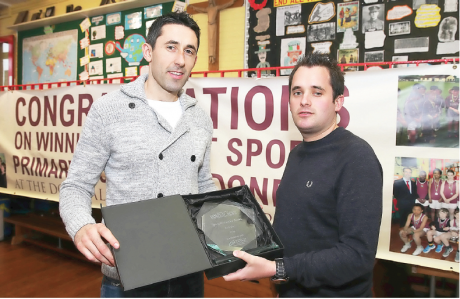 “I’ve been playing with St Eunan’s all my life and I’m 32 now; for me this year was probably the best one,” Kavanagh says. “It was an honour to captain St Eunan’s in the county final. To win it as captain meant everything. My family are all big St Eunan’s people and it was definitely a special moment to get Dr Maguire as the St Eunan’s captain.”

That it was Glenswilly who stood next to them on county final Sunday added an extra edge to the day. As the holders, Glenswilly went into the final as the favourites in a repeat of the 2007 final. Back then, the setting was much different. Glenswilly were new to the senior championship while St Eunan’s were in on the back of successive final defeats against Naomh Conaill and Gaoth Dobhair.

St Eunan’s came out on top 0-12 to 1-3. This one was different. “We were against our rivals, Glenswilly,” says Kavanagh. “They were the reigning county champions and were the team to beat. It’s like any sporting rivalry, you don’t want to be losing against your derby rivals. “You build it in your own mind: ‘We can’t lose this game’. There was no tomorrow and we didn’t even contemplate defeat.

We were very quick to point that out to the young players.” After the final, John Haran called Maxi Curran ‘a magician’. The Downings man certainly appeared to perform an optical illusion with St Eunan’s this year. Until the last fence, few spoke of them as contenders. Within the confines of their own setup, they knew different. Kavanagh says: “I’ve seen us years where we’ve been flying all through the League and flying into the Championship and then we’d just be caught in the quarter-final, like happened last year.

We figured this year that the Championship would be run off over eight or nine weeks and we didn’t really train until June; our work through the year and everything we did was about Championship. “We weighed it up at the start and we knew we had a lot of good players in the dressing room. We had a lot of talent and a lot of experience. We also had talented young players, but the likes of Sean Hensey and Caolan Ward hadn’t been on the pitch playing at the end of a winning county final before.

We wanted to do something about that. It just snowballed from that first game in Malin. “We have a great crop of fellas there like ‘Gibby’ (Conor Gibbons), Conor Parke, young (Conor) Morrison, Caolan (Ward) and Darragh Mulgrew. These boys are growing all the time. “We got working on things and the players were mad keen to take it all on board. We seemed to get better and better as the thing went on.” The Championship was parked until Donegal’s involvement in the All- Ireland series ended.

With Donegal in the All-Ireland final, the Championship was set for a straight sprint. County players trundled back to their clubs in the days after the defeat to Kerry trying to summons the energy and the stomach for the club campaign. Kavanagh headed to the Ryder Cup. Neil Gallagher and Michael Murphy did likewise. Upon his return, Kavanagh starred as St Eunan’s overcame Malin, their conquerors from last year, at Connolly Park.

John Haran was black-carded in the second minute and goals from Paul McLaughlin and Brendan McLaughlin had Eunan’s shaking. With Kavanagh the master, scoring 1-2, Eunan’s hit 1-10 on the bounce and came through. “It wasn’t anything to do with my preparation because I only got back from Gleneagles the night before,” Kavanagh says now. “Maxi said for me to play inside against Malin.

That meant I had the option of feeling my way into the game. “It wasn’t easy, far from it in fact, but I knew we’d create something, though. I would say easily I had less touches in that game than any other I’ve ever played and I ended up scoring 1-2. It was just one of those days when I clicked. “Playing inside that day gave me a wee lease of life. There was less stress on the body and I enjoyed it – just what I needed.”

With that win, St Eunan’s had destiny in their own hands – and they sealed a berth in the quarter-finals with a convincing 16-point home win over Naomh Muire. “We were back in the Park and we wanted to send out a wee message that day,” Kavanagh says. “We were at home and we wanted a big performance. If we put the doubts into their minds, we knew we could turn it into a long afternoon for them.

That we were actually able to do that gave us a lot of confidence going forward.” The gearbox had still notches untouched when Eunan’s sent Four Masters packing following a 2-10 to 0- 7 win. Again, Kavanagh was to the fore. “There were a lot of nerves in the air,” he says now. “What impressed me most about our performance that night was our tackling – it really went up a level. We were tackling and counter-attacking off them.”

In the semi-final, Eunan’s came up against St Michael’s, another of the favourites. Eunan’s were pushed all the way, but when the chips were down it was Kavanagh who drove the black and amber to the final. His was an inspirational second half performance that included a crucial point towards the end. “There are wee moments that can just turn a game in a flash,” he says. “One time late on Colm (McFadden) gave the ball into Daniel (McLaughlin) and we just managed to scramble it clear.

If they’d got something from that attack we could have been dead and buried.” Kavanagh had been superb for Donegal in the National League until a red card in the Division 2 final against Monaghan resulted in a suspension that saw him miss the win over Derry at Celtic Park.

A subsequent injury didn’t help matters, but Kavanagh soon returned to form again. The Kerry defeat hit hard, but Gleneagles helped clear the mind and, just when his club needed him most, Kavanagh stepped up to the plate. It was as Curran had expected: “I never had any doubt who the captain would be… He was awesome for us.”