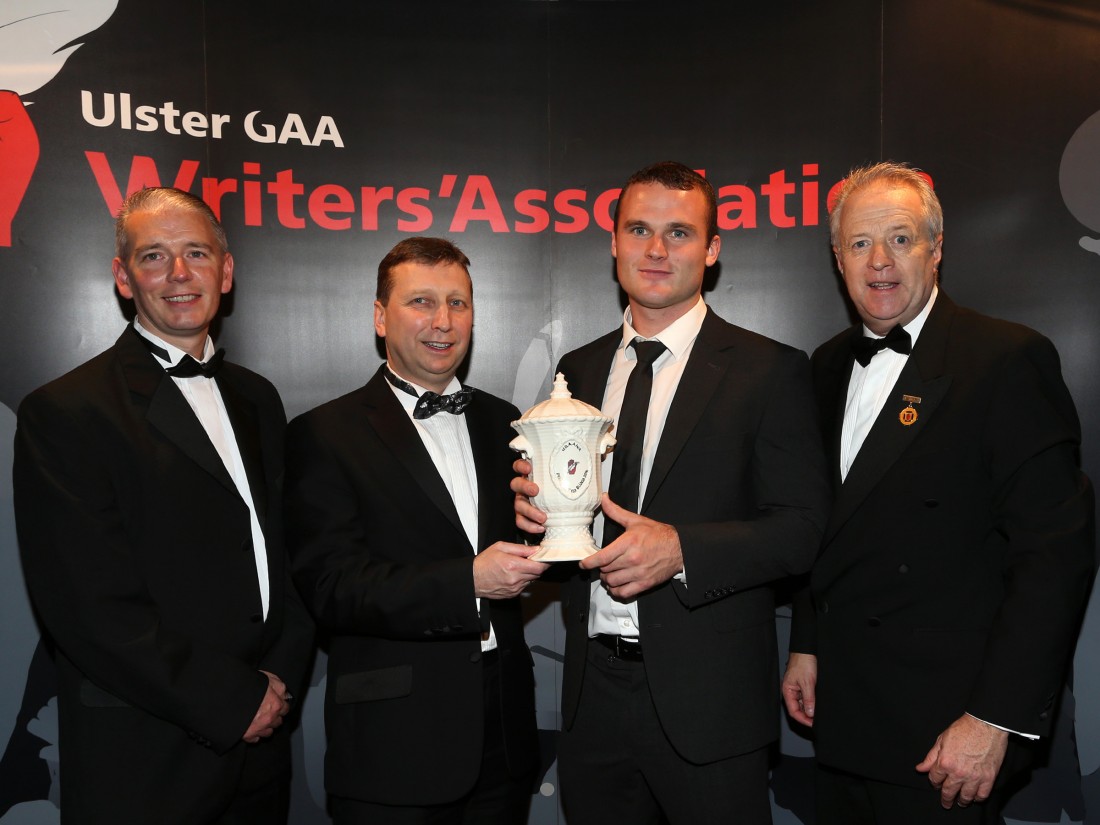 NEIL McGee believes that Rory Gallagher was the ‘right man’ to take over as Donegal manager.

Gallagher got a unanimous seal of approval on Friday night from Donegal’s clubs to succeed Jim McGuinness, the Fermanagh native handed a three-year term with the option of a fourth.

McGee saw Gallagher’s skills first hand during the three years he worked alongside McGuinness up until his departure in 2013. The Gaoth Dobhair man – speaking on Saturday night after being named as the 2014 Ulster GAA Writers Association Player of the Year – has given a ringing endorsement to Gallagher’s credentials.

“He was the right choice and he was the stand-out candidate there. I’m really looking forward to working with him. We know what he’s capable of. The players will row in behind him and do what’s best for Donegal in 2015.

“He’s the right man for the job,” McGee said.

“He can relate to the players and that means a lot. He reads the game very well and he has great football intelligence. He’s not afraid to make big calls which is important and he’s a big personality, which you need as a manager.

“He just gelled with us straight away and we could see that he knew his stuff.

“Rory will have his own ideas. You have to change all the time anyway. What we did this year won’t be good enough next year.”

McGee hopes that Gallagher will be able to call on the bulk of the outgoing panel.

Neil Gallagher has already suggested that he’ll be back in harness, but doubts remain over a number of other senior players.

“Some boys are hemming and hawing,” McGee mused.

“The older boys will probably need more time to reflect on it properly. Once you see teams getting back out training, the hunger will come back over Christmas again. Hopefully we’ll have everyone back and it’ll be all hands on deck again next year.

The teak tough full-back is in the form of his life too. A third All-Star was collected on Friday-week past and the Gaoth Dobhair man was nominated for the GAA Player of the Year award, which was scooped by Kerry star James O’Donoghue.

During the summer, McGee conceded just three points off his direct opponent, two from Bernard Brogan and one to Conor McManus in the Ulster final.

McGee said: “Conor McManus got one against me in the 72nd minute and Jim ate the head off me for that one! I went up the field trying to get a point, it broke down and McManus fired it over.

“Jim always gave me that licence to get up the field when possible. I just got on the end of a couple of moves. When I sit back and analyse a game, that doesn’t come into it for me – it’s all about how the opposition do against me.”

McGee kept the likes of O’Donoghue, Emmet McGuckin and Jamie Clarke scoreless and his exploits were recognised on Saturday night when he picked up the top prize from the UGAAWA.

He said: “It’s nice to look back and reflect on the good year we had and it’s nice to pick up these awards and be recognised.”

During the McGuinness years, Donegal won an All-Ireland, three Ulster SFC titles and the 2011 Division 2 League title, while they also featured in the 2014 All-Ireland final, the 2013 Ulster final and the 2014 Division 2 final.

“Jim got us up to that level and the players know now what’s needed. If we see the standard drop, we’ll lift it.”

Gallagher takes over the controls in much calmer waters than the shipwreck McGuinness assumed control of in 2010.

McGee’s mind, for the moment, is on an impending trip to Australia with the Irish International Rules team for the November 22nd Test against Australia in Perth. Struggling with an ankle injury that ‘might need a bit of surgery’, McGee will have an ear cocked to home during his time Down Under.

He said: “I’m looking forward to meeting Rory and seeing what his plans are – we’ll give him 100 per cent. It’ll be in the back of the mind in Australia, coming home to see the new manager.

“It’s always exciting when you go to a meeting with the manager for the first time. You’re like a wee kid at Christmas going in to see what the plans are.”