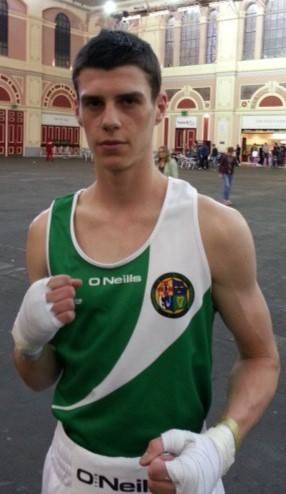 RECENTLY-CROWNED Irish Defence Forces boxing champion Lee Boyd chases his second Irish title in a matter of weeks as he takes to the scales for the National Intermediate Championships.

The Convoy ABC man, who won the 67kgs title at the Defence Forces Championships by a second round TKO on Halloween night, has been given a bye into the quarter-finals of the Intermediate Championships. At 67kgs, Boyd is pencilled in to face Richie Hedderman from Bray next Friday night at the National Stadium.

This weekend, four Donegal boxers will be in action in preliminary round bouts at the Championships.

Twin Towns’ Lee Bradley is the first of the locals on the canvas on Friday night when he meets Rathkeale’s Johnny Harty at 71kgs.

Boyd is one of six Donegal punchers to be drawn in the quarter-finals.

Illies’ five-time Irish kingpin Leigh Moran will meet Elhle Cekiso of Portlaoise (54kgs) and another Illies man, Thomas Mongan, fights Patrick Faloon of Camlough (57kgs), both of which will be, like Boyd’s bout, next Friday, November 21.

On Saturday-week, November 22, Letterkenny’s newly-crowned Ulster champions Stephen Doherty and Michael McConigley are in action. Doherty has been handed a re-match of his Ulster final as he has been paired against Michael Cummings from Carrickmore. In the Ulster final, Doherty stopped Cummings in the second round.