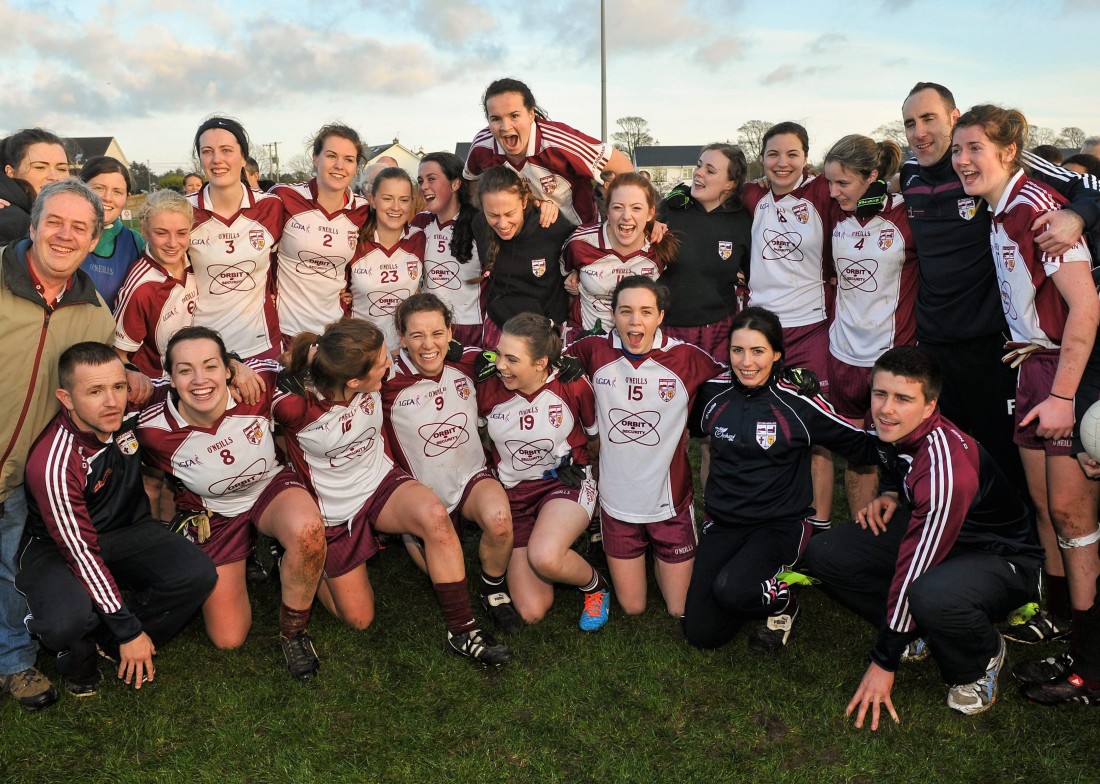 Termon celebrate their win over Kilkerrin-Clonberne on Sunday

A clinical finish to the net by Termon full forward Geraldine McLaughlin eight minutes from the end of normal time proved to be the decisive score of a nail-biting Ladies All-Ireland senior club football semi-final in Clonberne, Galway on Sunday as the Ulster champions deservedly booked their spot in the decider.

There were jubilant scenes from both players and the large band of travelling supporters at the final whistle, which did not arrive until an amazing eleven minutes of stoppage time had been played. Kilkerrin/Clonberne had desperately been searching for a levelling goal for most of the added time, but a heroic defensive effort led by full back Emer Gallagher kept the Connacht champions at bay.

Geraldine McLaughlin, however, was the undoubted star of the show throughout, ending the contest with 2-3 to her name, providing an assist for the other goal and generally causing panic in the Kilkerrin/Clonberne defence whenever she picked up possession. The Galway side tried in vain to double mark her, but McLaughlin kept finding a way and when she was persistently fouled, Maureen O’Donnell converted the crucial frees.

This was of course a solid team effort from one to fifteen and beyond for Termon, but McLaughlin was a force of nature on the day, involved in every one of her team’s scores. Credit where it’s due, the quality of ball delivered into her was also of the highest order and will need to continue to be when Francie Friel’s side face Mourneabbey of Cork in the final.

This was the meeting of the giant killers, with either side having knocked out the winners of the previous two competitions in their provincial finals. On a gloriously clear, sunny day for football Termon got off to the perfect start when McLaughlin popped over a point within a minute, quickly displaying her instinct for the most direct route possible to goal.

Kilkerrin/Clonberne hit back impressively, though, as Louise Ward galloped forward from midfield and saw her effort smartly tipped over by ‘keeper Laura Gallagher. A similar run then led to her setting up Lisa Gannon who drove low to the net, before McLaughlin snatched at a goal chance at the other end.

Kilkerrin/Clonberne were trying to open up space for Louise Ward and Clarke to run into, but after a tricky opening quarter, Termon adapted well and began to stifle the home side. Maureen O’Donnell kicked a free before Nicole McLaughlin was sent to the sin-bin for a rash challenge on ten minutes, but Termon crucially outscored Kilkerrin/Clonberne by 1-2 to 0-3 while a player short.

The goal came when McLaughlin took another fine catch and shook off her marker, before rolling a shot against the post and following up to tap in the rebound. O’Donnell and Clarke continued to fire over the frees for their respective sides, but Termon had the greater threat close to goal and struck for their second major on 23 minutes when Shannon McGroddy fired high to the net.

O’Donnell’s fifth free of the half gave Termon a 2-7 to 1-5 advantage after Clarke had uncharacteristically kicked a close in free wide, but Kilkerrin/Clonberne did manage the last score of the half through Gannon. A cagey start to the second period saw both sides spurn opportunities, but Nicola Ward provided inspiration for Kilkerrin/Clonberne with a run from well inside her own half which finished with a well taken score.

Clarke then drove over a free on 43 minutes to leave only two in it, but Termon responded when McLaughlin was fouled once more and O’Donnell split the posts. Kilkerrin/Clonbernewere now facing a blanket defence when they ventured forward, and the quality and discipline of the Termon defensive effort was impressive.

Kilkerrin/Clonberne stayed patient, though, and got back within one after Olivia Divilly and Clarke tapped over frees which appeared to give the Galway side all the momentum going into the closing stages. From the kickout after Clarke’s effort, though, Roisín Friel took a splendid catch around midfield and quickly set an attack in motion.

McLaughlin took control, playing a clever one-two with McGroddy before bearing down on goal and beating Lisa Murphy from close range. Roisín McCafferty then kicked a splendid point with only four minutes left of normal time, but a number of lengthy stoppages meant that this contest was far from over.

On 58 minutes, Louise Ward took off on another run through the heart of the Termon defence, and appeared slightly fortunate to be awarded a penalty after appearing to lose control of the ball before contact was made. Two time All-Star Clarke calmly slotted the penalty to send the home fans wild, and another free from the same player left the minimum between them as injury time began.

However, this team from The Burn Road refused to wilt under the most intense pressure, their experience of defeat at the same stage four years previously obviously standing to them.They calmly worked the ball down the field to McLaughlin, who drew a foul and O’Donnell again stretched the gap to two. Within a minute, Termon had another free which, perhaps sensing the importance of it, McLaughlin took herself and another white flag was raised.

This critically left Kilkerrin/Clonberne chasing a goal, and with Emer Gallagher and her colleagues in defiant form, the Donegal side were in control once more. Little did we know how long they would have to hold out for, as Clarke tapped over a close in free on 70 minutes having obviously been told there was more time to follow.

Termon, however, won possession from the restart and when John Niland eventually called a halt to proceedings, players from both sides sunk to their knees on opposite ends of the emotional spectrum. It had been a tremendous contest and the victors deserved the spoils, and once they realise quickly that the ultimate goal has still not been achieved they will be a tough proposition for Mourneabbey in the decider.

Player of the match was undoubtedly Geraldine McLaughlin, but she was surrounded by fantastic displays from Nicole McLoughlin, Maureen O’Donnell, Emer Gallagher, Roisin McCafferty, Shannon McGroddy, and Maria Carr, while Laura Gallagher’s early save capped a fine display.