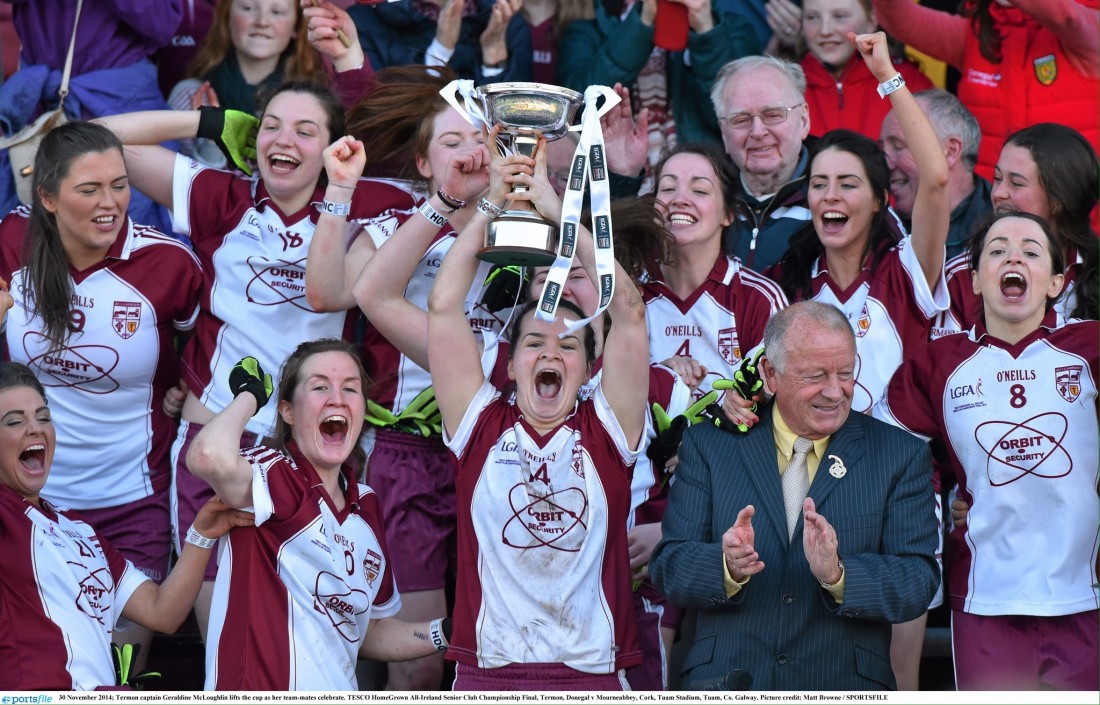 GERALDINE McLaughlin saved the best wine to last and then corked the champagne as a stunning performance from the inspirational forward fired Termon to All-Ireland glory in Tuam.

McLaughlin scored a remarkable 3-8 to steer Termon to victory over an excellent side in Cork’s Mourneabbey. For long periods, Mourneabbey looked the best equipped but they were worn down by resilient Termon and left mesmerised by the brilliant McLaughlin.

It was her first-half goal that had kept Francie Friel’s team in touch at the break, but Mourneabbey led 0-10 to 1-3 at the interval. McLaughlin had been starved in the opening period, but she cut loose for a wonderful second half that will live long in the memory.

Ciara O’Sullivan momentarily stretched the Mourneabbey lead to five, but then Termon found something from within.

A McLaughlin free pulled them to within a point and in the 44th minute Termon got a lead that they would hold for the remainder. Veteran Maureen O’Donnell picked McLaughlin out and the deadly forward did the rest, firing home past the despairing Méabh O’Sullivan.

Termon scored one of the points of the game during a purple patch that yielded 1-6 in succession. Ciara O’Sullivan was uncharacteristically off-target and Termon gave them no time to regroup. Laura Gallagher’s quick restart found Maria Carr whose surging run down the leg channel turned defence into attack.

Shannon McGroddy was next with the baton and she carried right into Mourneabbey’s heart to pick out McLaughlin who swung over in some style.
Termon were in for another goal when McLaughlin turned provider to set up Róisín Friel whose shot was turned over the bar by the ‘keeper.

With Rebecca Larkin in the sin-bin Termon turned the screw but they were rocked back when in-form defender Emer Gallagher was also sent to the sin-bin in the last ten minutes. Almost instantly Mourneabbey struck for a goal, sub Katie Healy sliding into the far corner past Gallagher.

Mourneabbey tails were up. McLaughlin and O’Sullivan traded points, but just when some were contemplating a replay Termon came up with the coup de grâce. Friel found McLaughlin and, despite SIX Mourneabbey players for company, she found a way through, clipping left-footed to the net.

At the start of the season Friel told McLaughlin to work on her left foot – her three goals came off the left boot here.

Mourneabbey led 0-10 to 1-3 at the break but the goal from McLaughlin was priceless for Termon.

Róisín McCafferty’s high ball was fetched by McLaughlin who prised away from the shackles to fire to the net from close range.

In the dying minutes of part one, Termon had Gráinne McDaid sin-binned and with Mourneabbey leading 0-10 to 1-3 the sanctuary of the dressing room will have appealed to Francie Friel and company at the short whistle.
Friel ‘read the riot act’ at the interval and it was a different, better, Termon that emerged.

They started getting ball to McLaughlin and with a dogged defensive display they scored a memorable win. With Maria Carr, Nicole McLaughlin, Sharon McLaughlin and Shannon McGroddy among the stand-outs, Termon clicked into gear and when their star turn struck gold they were on their way to a famous win.

Cometh the hour, cometh Geraldine McLaughlin. It was her hour and it’s Termon’s day.