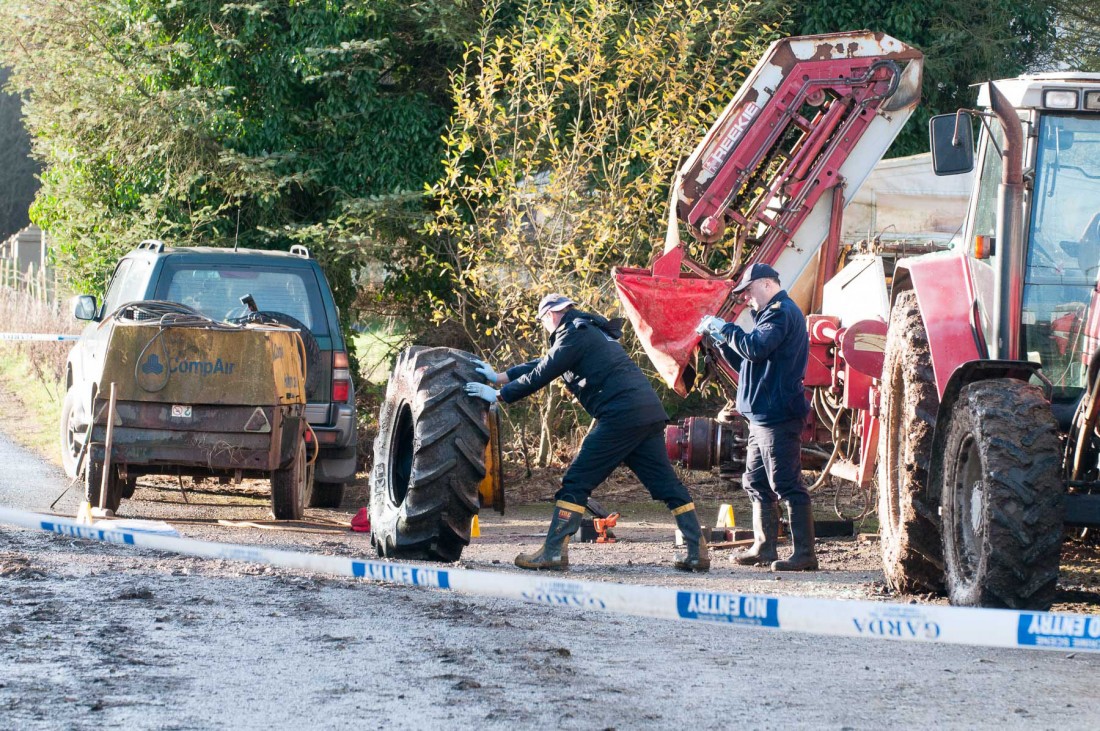 Members of the Garda Crime Scene Investigation at the scene of the tragedy in Killygordon on Saturday morning.

By Kate Heaney
THE funeral takes place in Murlog this morning at 11 am of Seamus Hegarty (52) from Cloughfin, Ballindrait who was tragically killed while repairing the tyre of a harvester at Crossroads on Friday evening.

His life-long friend, who was helping him – Kevin Woods (51) – who was also killed, will be buried tomorrow morning following Requiem Mass at 11 am in St Patrick’s Church in Murlog.

The local communities in Ballindrait and the wider area are stunned at the tragic death of the well-known local farmers who regularly helped each other with farm work. They were friends from they started primary school and were working together harvesting potatoes.

It was while working on the wheel of the potato harvester outside the field at Monellan, Crossroads, the accident happened at around 6 pm.

Huge crowds queued down along the road to attend both wakes in Ballindrait on Sunday from early morning, waiting to pay their respects, such was the popularity of the two men.

Mr Hegarty was married with four children while Mr Woods was a single man.

The two men were familiar with this type of farm machinery and would have blown up tyres numerous times before, yet something went badly wrong on this occasion.

Two other men who were at the scene were helping with the tyre and to provide light for the two friends to work.

They raised the alarm but there was nothing emergency services could do as both men both men were killed instantly.

Gardai sealed off the area for forensic examination and it was near 10 pm before the bodies of the deceased were taken to Letterkenny General Hospital.

Fr Patsy Arkinson gave the deceased the last rights after being called from a local wedding.

“Neighbours came around and brought tea and offered what support they could. While the bodies were being removed at around 10pm the people prayed the rosary. There was just stunned silence. It was very emotional and touching,” Fr Arkinson said.