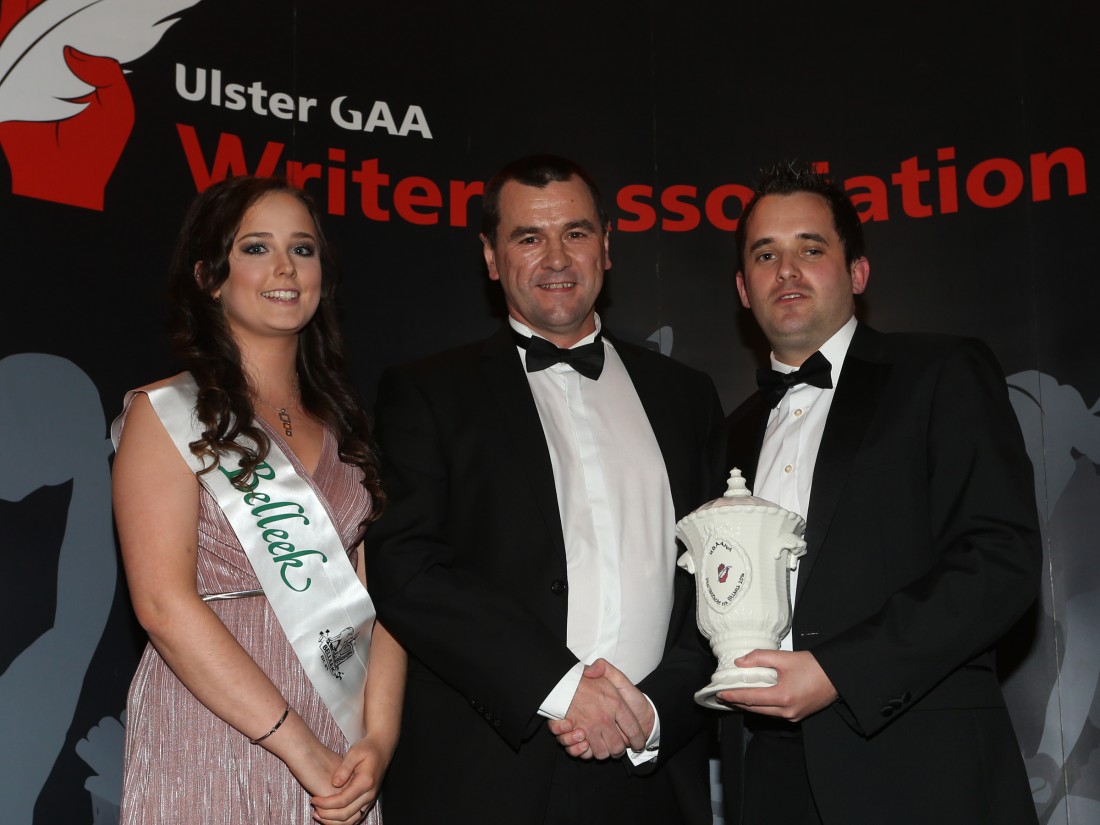 UGAAWA member Chris McNulty presents the Personality of the Year Award to Donegal county chairman Sean Dunnion who accepts it on behalf of Donegal manager Jim McGuinness while included is Maeve of trophy sponsors Belleek Pottery.
Pic by John McIlwaine

DONEGAL was well represented among the winners at the 27th annual Ulster GAA Writers Association annual awards banquet at the Great Northern Hotel in Bundoran on Saturday night.

Full-back Neil McGee was named as the Footballer of the Year after a stellar summer at number three. The Gaoth Dobhair man was instrumental in Donegal’s run to the All-Ireland final, conceding just three scores in Championship football off his men.

Former Donegal manager Jim McGuinness was named as the UGAAWA Personality of the Year having led the county to a third Ulster title in four years. McGuinness guided Donegal back to Division 1 of the League and returned the county to an All-Ireland final, where Kerry pipped them to the Sam Maguire.

McGuinness was also the recipient of the award in 2011.

The Glenties native’s commitments at Celtic FC meant that he was unable to attend Saturday’s function in Bundoran. Donegal chairman Sean Dunnion accepted the award on his behalf.

McGuinness’s memorable final year in charge of Donegal was also recognised with the Donegal senior footballers named as the Team of the Year.

Donegal’s hurlers were also recognised for their history-making exploits in 2014. Next season the hurlers will compete in Division 2B in 2015 after winning Division 3A this year. Manager Ray Durack, who has recently agreed to stay on in the job, was in attendance at the event, once again held in the Great Northern, the spiritual home of the UGAAWA.

Special guest on the night was Martin McAviney, President of the Ulster Council.

“We lead the way here in Ulster,” Mr McAviney said in his address.

“We have the best and most competitive games and our attendances were up again in 2014.

“We recognise all codes in Ulster, we don’t differentiate and we share the stage as often as possible between football, hurling, camogie and handball.

“We were also very proud to host Feile in Ulster this year. We must also strive to get better next year and keep up our good work.”

He paid tribute to Ballyshannon’s Tom Daly, a former Ulster Council President, for his trojan work on the redevelopment of Casement Park.