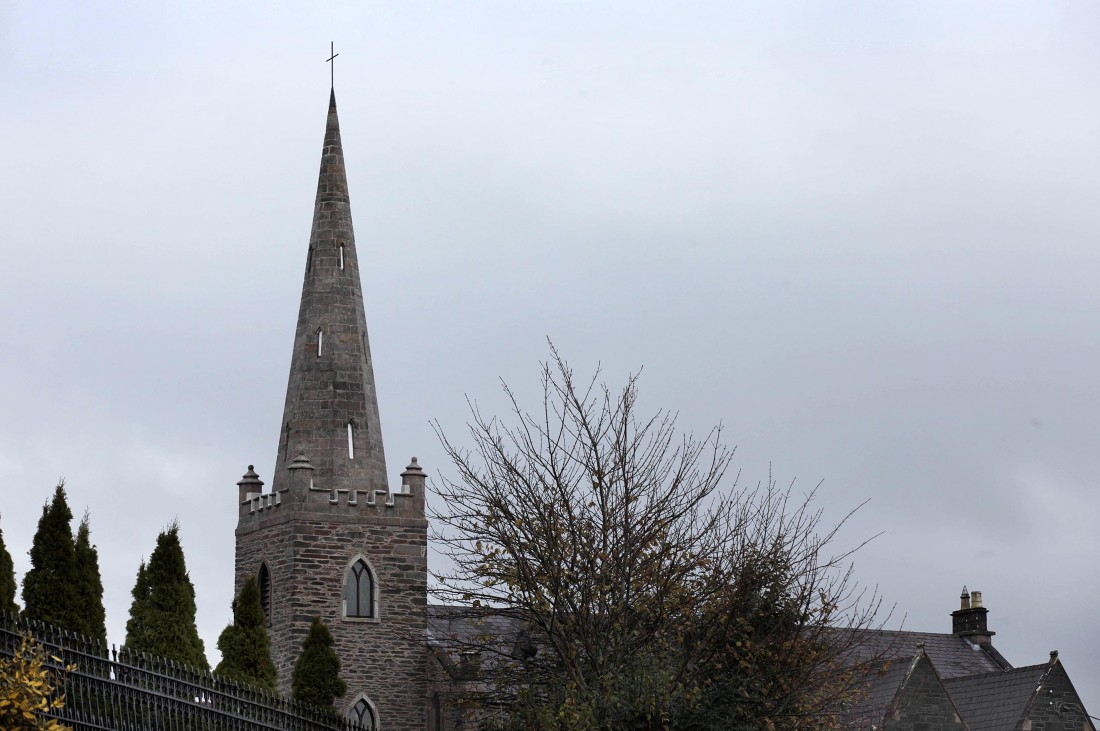 Conwal Parish Church in the Cathedral Square – the Church tower dates back to 1636 – has now been restored to its original specification for the benefit of all its inhabitants and for those who visit the town.

To show their appreciation for the support and generosity afforded to the parish from the local community during this €120,000 project, the Rector of the Conwal Parish Canon Stewart Wright, together with his parishioners, are hosting an open day on Saturday, November 22.

“We’ve received great support and financial assistance from the entire community and, hopefully, as many people as possible will call in to this open day to see the town’s oldest historical building and the work that was done,” Ms Cynthia Fuery, Parish Secretary, said.

Work on the project commenced back in April and the main contractor was off site in early September. However, it was only when the work started that the parish became aware of the full necessity of the work.

“The tower was so unstable that the contractor was reluctant to let workers work in certain areas. Timbers joists supporting a stone wall were so rotten that the wall above had no support,” she said.

Now the tower has been restored close to its original design. Walls supports have been reinstated, floors joists replaced, a new cross fitted to the spire, drainage of rain water improved and cement pointing replaced with lime cement. Two additional windows have been opened at the level of the upper door. The colour of the front door is now grey and not a wooden grain, grey being the colour linked to that period of building.

Artefacts, documents and photographs charting the history of Conwal Parish Church are contained in the Church guide which provides an insight into Letterkenny from the 17th century to the present day.

The guide is written in English, Irish, German and French.

The tower could be older than the town itself. The date stone on the nave tells that the church was build in 1636 but from the renovations it is now believed that the tower stood on its own as an independent building before the church was added.

“The spire was erected to the top of the tower in 1882 so at one point the tower stood on its own without the church and without the spire.

“One theory states that the tower was build at the time monasteries were under attack in the 1400-1600s, including the monastery at Conwal. The recent renovations discovered a fireplace at the bottom of the tower with a flue up the full length of the north wall. This was a new discovery and is strong proof that the tower was once a keep with sentries living in it and keeping watch for possible raiders,” she said.

The local population took a great interest in the work being done to the tower, testimony to Canon Wright’s ongoing drive to make Conwal Parish Church more assessable to the general public.

“It’s been a case of business as usual throughout the project which access via a side door. We had two weddings in July and the site was cleared for each to allow access through the front door. Everyone has been so helpful. It’s been a real community effort,” Ms Fuery said.

The Open Day will be from 11am – 5pm, with two guided tours at 12 noon and 3pm. Light refreshments will be served in the church.