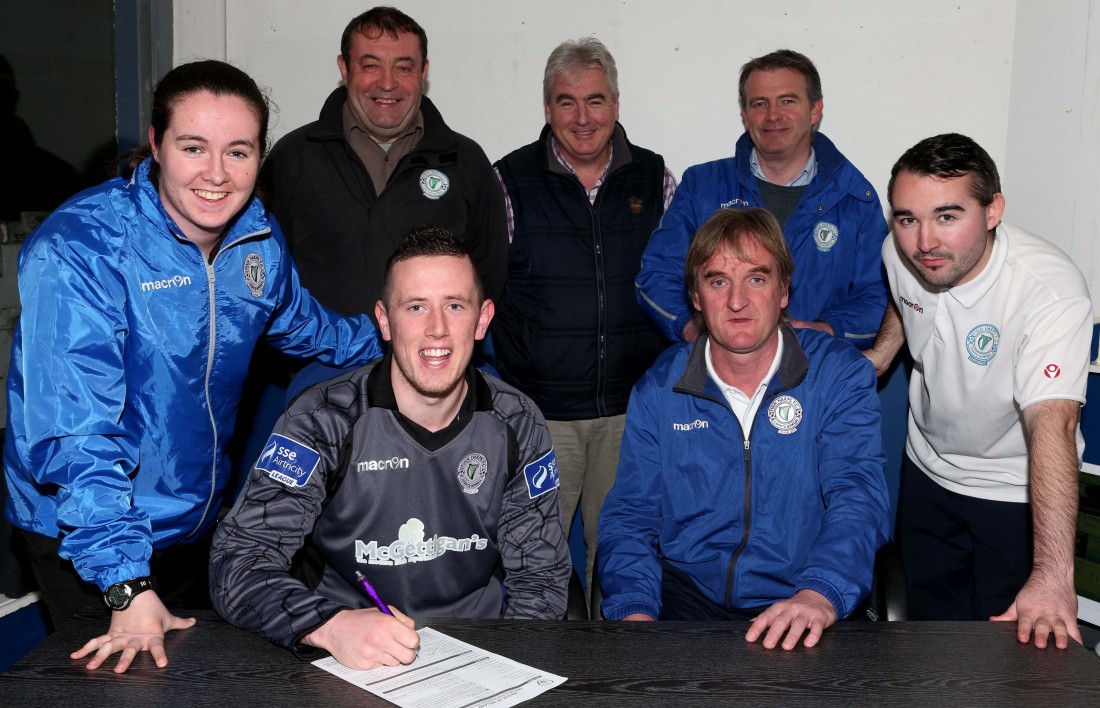 CIARAN Gallagher doesn’t want to act out his own version of the Parabal of the Prodigal Son.

A year after leaving to join north-west rivals Derry City, the Raphoe man has returned ‘home’, this week signing a one-year deal at Finn Harps.

Gallagher already has 127 appearances for Harps to his name, having made his debut as a just-turned-17-year-old in 2009. Although a boyhood Harps fan, Gallagher doesn’t have any intention of playing to the gallery down Navenny Street.

His game time at the Brandywell may have been limited, but Gallagher believes that he is returning to Finn Park a better goalkeeper than when he left at the end of the 2013 season.

“I don’t want to start using that, but when you support a team from a young age you’ll always be drawn to that team,” he said.

“It’s good to be back. I’m looking forward to the start of pre-season and getting the season started. Harps had a decent season last season so we’ll be looking to push on from that. It’s been gradually improving, maybe at a slower rate than we’d all have wanted, but hopefully we can kick on now and challenge.”

Gallagher was never far away.

He kept a close eye on results and was in contact with several of his old team-mates. Gallagher expected the stick when he joined the Candystripes and it’s a move that he’s glad he made. In the season gone by, Gallagher was part of the Derry City side that played in the Europa League and reached the FAI Cup final.

He said: “It wasn’t an easy decision last season, but I made it. I have no regrets about it whatsoever.

“The experience of the European games and the FAI Cup final was brilliant. Every player wants to be playing in those types of games, but it was great to be involved in them.

“With the amount of training and gym stuff I was doing this year I could do nothing but improve. That was all top-notch. I feel that I’ve matured a lot. When I came up here at 16 I was thrown in at the deep end not long after that. I think I needed the wee step back. I’m hungry now to get back playing regular senior football again.”

For the former underage international with the Republic of Ireland, donning the mantle of the understudy was a new experience. Ultimately, it was the lack of match action that resulted in his move back to Ballybofey.

Gallagher said: “I wasn’t going in the road to Derry thinking that I was going to play every week. Gerard Doherty is one of the top ‘keepers in the country. I probably wasn’t prepared for how difficult it would be sitting on the bench. I hadn’t tasted that before.

“People ask me about it all the time, but I have no regrets. I’m grateful for getting the chance at a Premier Division set-up, training full-time and twice a day, things like that. I’m a lot more professional thanks to the things that I’ve learned this year.”

Ollie Horgan, the Harps manager, has confirmed that he wants to have three goalkeepers on his books by the time the team returns to pre-season training on January 13.

That number seems unlikely to include Conor Winn, who has started a new job in Galway and, while it appears as if he has played his last game for Harps, Horgan said: “I still wouldn’t rule him out. We haven’t closed the door completely yet.” However, bearing in mind that Horgan is anxious to again obtain the services of Shaun Patton and Mark Anthony McGinley, Winn’s fate looks sealed. “He’s a good lad, a very good lad who gave us a massive commitment,” Horgan added of Winn.

Gallagher telephoned Horgan a fortnight ago to enquire about the availability of a goalkeeper’s spot.

Gallagher said: “I spoke to Ollie last year and the meeting I had with him actually made the decision harder. I liked the plans that he had for the club and I liked the way he spoke. He’s very honest and up front about everything. It was very hard to ring him and tell him I wasn’t signing. I sat down with him again last week and we spoke about a good few things. I’m looking forward to working with him.

“Harps’s defence was very solid last year. I’ve seen that they have real spirit and fight. Other teams didn’t create a lot against them so hopefully that continues – I’d like a few more clean sheets.”

Horgan is delighted to get Gallagher on board, especially given the long searches he undertook last year in pursuit of a number one.

The Harps manager said: “He wants to be here and I want people who want to be here and who want to commit to the club. We have a couple of decent ‘keepers and he knows that he’ll have to fight for his place – that goes for every player we’ll sign.

“Ciaran, this time last year, went to play for Derry in the Premier Division and to sample the Europa League. He got a fair amount of game time, but he wants to come back home. He is very positive. You want good competition in every area of the field. I’d hope to have that by the time we start pre-season in January.”