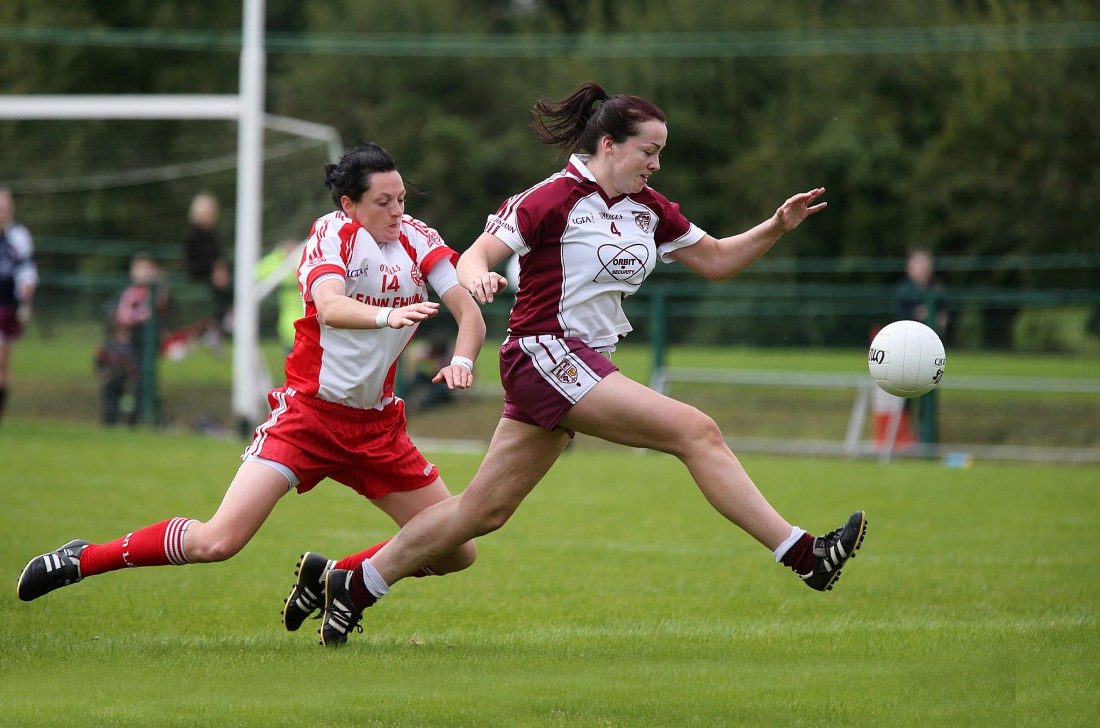 Termon’s Nicole McLaughlin in action in the county final against Glenfin.

TERMON are on the Ulster final charge again on Sunday when they travel to take on Down’s Castlewellan in the Ulster semi-final (Castlewellan, throw-in 2pm).

Ulster champions in 2010, Termon have been in the last two Ulster finals, but were beaten in both by Donaghmoyne, last year losing out in a replay. Now, though, the Burn Road women are on the provincial path again.

A landslide 10-9 to 1-2 win on Sunday over Newtownbutler was both routine and ruthless rolled into one.

Geraldine McLaughlin top scored with 5-3 and her prowess in front of goal will be vital on Sunday when Friel’s side meets a Castlewellan team containing four members of the Down side that won the All-Ireland Intermediate crown last month. Kyla Trainor scored 2-4 in Down’s final win over Fermanagh and is one of the Castlewellan stars, while Lisa Morgan, Karen McMullan and Orla Boyle were part of the Mourne side.

“This will be a different game to last weekend,” Friel warned.

“Down were the Intermediate champions and those girls are top players. We had it easy enough on Sunday, but look you still have to beat what’s put out in front of you.

“We’re sort of going into the unknown again this weekend. Bar those Down players we don’t know an awful lot about this Castlewellan team.”

Termon’s team is littered with stars.

McLaughlin is the obvious first name to stand out, but she’s far from being alone. Her sister, Nicole, gave a magnificent display against Newtownbutler, while Roisin McCafferty has captained the Donegal ladies and the likes of Laura Gallagher, Emer Gallagher and Roisin Friel have played for the county, as has Maureen O’Donnell, whose big game experience will also be called upon.

Termon are unlikely to have Olive McCafferty, now based in Scotland, available for the game due to work commitments, but Friel expects to have a full-strength panel otherwise. Dara Kelly’s return from a cruciate injury has boosted the ranks, while the emergence of Lucy O’Flynn, Lauren McElwaine, Holly McDaid and Anna Gallagher have also strengthened the numbers.

With Roisin Friel (2), Roisin McCafferty (2) and Shannon McGroddy on target with goals last time out in Fermanagh, Termon have plenty of firepower in addition to McLaughlin, who was withdrawn at half-time with her side 7-7 to 1-0 ahead.

“We’re looking forward to the game, but semi-finals are all about winning,” Friel said.

“We just want to make sure we get over the line and reach the final.”

Termon’s game in Castlewellan means that many supporters will be divided as the Termon senior men are taking on Glenswilly in a Donegal SFC quarter-final in Letterkenny at 3pm on Sunday. Friel himself is the team trainer for the men’s side while Trevor Alcorn, his assistant with the ladies, is expected to line out on Sunday in O’Donnell Park.

Termon’s old nemesis, Donaghmoyne, are in action in Sunday’s other semi-final as they take on Clann Eireann (Armagh) in Lurgan. 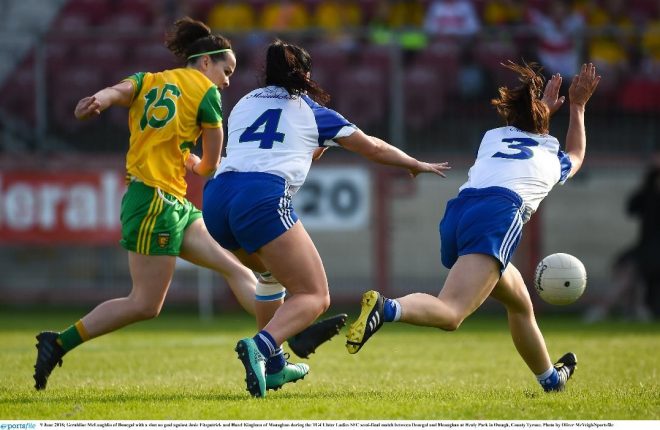 Geraldine McLaughlin is back to her devastating best and is gunning for Ulster SFC glory once more.