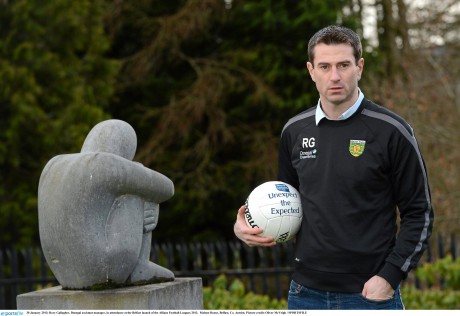 ALTHOUGH Rory Gallagher is now quoted as the odds-on 1/5 favourite to succeed Jim McGuinness and become the next Donegal manager, no-one has yet to officially declare an interest in the vacancy.

With Declan Bonner, Martin McHugh and the former Mayo manager James Horan ruling themselves out of the running, Gallagher is hotly tipped to step into the breach.

The Fermanagh native, who was McGuinness’s assistant for the first three of his four years as manager, is currently the joint manager, alongside John McNulty, of a Kilcar team that is battling for survival in the Donegal Senior Football Championship ahead of a game against Bundoran on Saturday evening.

Gallagher is keeping his focus firmly on a crunch weekend of action, but it is expected that the Killybegs-based former Fermanagh star will give the Donegal job some consideration ahead of the closing date for nominations, next Friday, October 17.

A five-man selection committee will oversee the appointment of a new manager. County Chairman Sean Dunnion, secretary Aodh Mairtín Ó Fearraigh and treasurer Cieran Kelly will spearhead the recruitment process. They will be joined by another member of the executive, with county vice-chairman Denis Ellis expected to fill that space, with a fifth member to be brought on board once the list of candidates has been finalised.

Gallagher can be expected to consider seriously his options given that he is the overwhelming favourite to take over, although he is holding his counsel ahead of this weekend’s club action.

Two men who may be in the running are Paul McGonigle and Damian Diver, who were part of the new-look management team headed by McGuinness in 2014.

“I haven’t given it any major thought as yet, but we’ll see what happens,” Diver said.

“I learned a great deal from this year and it was unbelievable being in that set-up.”

McGonigle, meanwhile, said he was keeping ‘an open mind’.

“I’m just adjusting to not going up the road to training this last couple of weeks and am really enjoying the break,” the Buncrana man said.

“It was a great experience and the reality is that I’d love to have had another year with Jim and this group of players.

“I haven’t considered it too closely, but I’m sitting on the fence. We’ll see what develops. I have an open mind at the minute.”

Horan laughed off stories linking him with the position while McHugh said he couldn’t devote the necessary time and Bonner, writing in his column in this week’s Donegal News, says he will seek another term as Donegal minor manager.

“I won’t be letting my name go forward for the position of Donegal senior football team manager,” said the Na Rossa man.

“I feel that the minor job for 2015 is the cap that fits me best at the moment. We’ll see what happens with that but my intention would be to get another year working with the minors to keep moving it on.

“I won’t rule out a return to the senior job at some stage in the future, but the timing isn’t right now.”