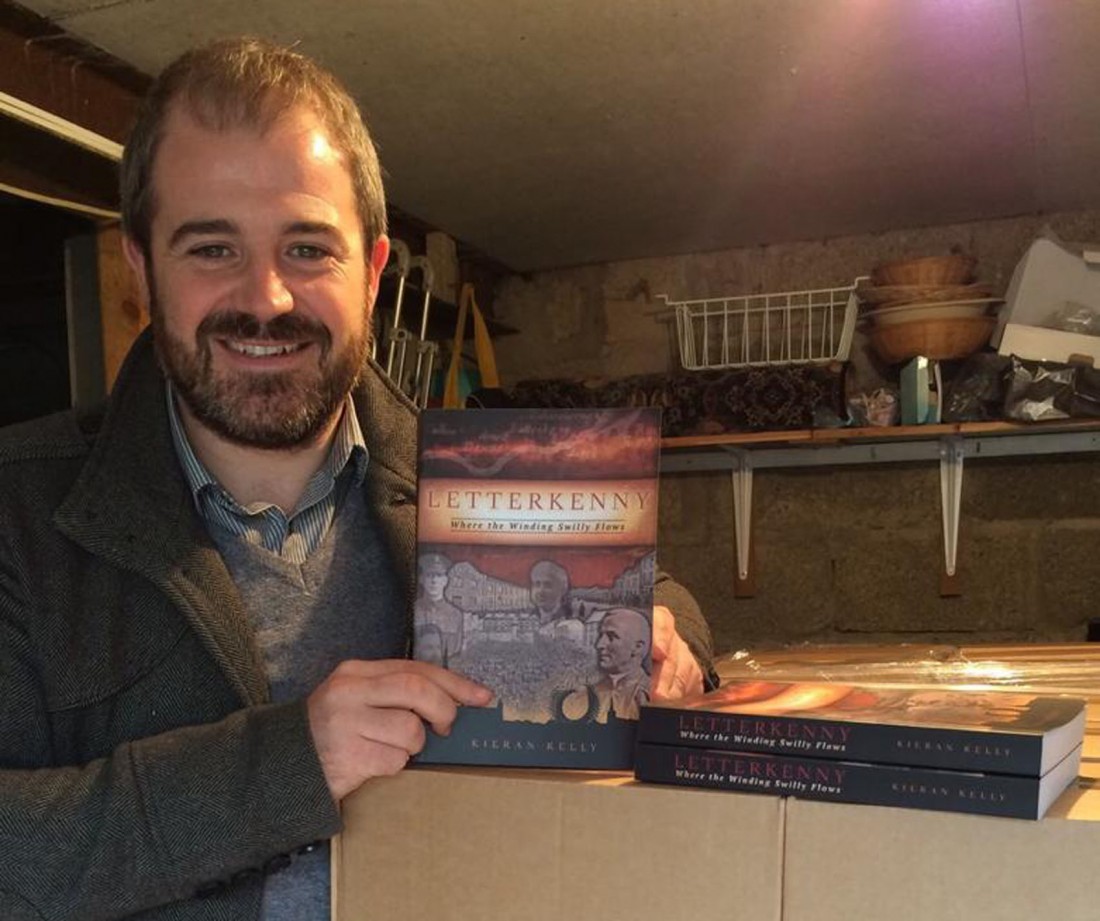 A NEWLY-published author has said his home town of Letterkenny is enjoying a very exciting time of expression through the arts from music, comedy, drama to spoken word and he is delighted to be part of it.

Tonight, October 28, Kieran Kelly launches his first ever publication, which was six years in the making, capturing the in-depth history of his native town.

Letterkenny – Where The Winding Swilly Flows takes an exciting journey into the past to discover the rich and colourful history of the Cathedral town and its immediate environment.
From carving the glaciated valley in the last Ice Age right up to the present day, the reader will meet many people who helped make the town what it is today.

Kieran’s book evolved from an idea he had to compile a history booklet on Letterkenny after being asked to do a walking tour of the town for a class her was teaching at the time.

“While I was looking for information on Letterkenny I found booklets on various aspects or chapters of the history of the town so I thought it would be good to have one that covered it all.”

At the time, Kieran was working as a substitute teacher and being a man who doesn’t like to stay ‘inactive’ for too long, he began his research and the project grew, the more he found out.

Kieran discovered that a lot of stories that he had heard about the town growing up, varied from what he was reading in various historical books. One of those was the capture of Wolfe Tone.

“I was told that Wolfe Tone was caught in Letterkenny and a lot of previous books stated this. But when I went to old newspapers of the time, I found out that it was actually Buncrana.

“I was intrigued where this ‘legend’ had grown from. The man who had identified Wolfe Tone was named George Hill and there is a man of this name buried in Sentry Hill cemetery, but he was a toddler at the time so, although it couldn’t have been him, this may have been where the legend started.”

Kieran said it was very important to go to a primary source as a lot of the history books he read did not reference where they got their facts from. He relied heavily upon newspaper archives, in particular those of the Derry People/Donegal News and the Derry Journal.

The Letterkenny man even found out some very important information in the Donegal News relating to his own family during his research. “My grandfather Michael Kelly died of a brain haemorrhage, and that’s all my father Hughie really knew as he was quite young when he died.

“I found an interesting brief in the Letterkenny Notes in 1932 or 33 where it stated that a Michael Kelly from Kilpheak had suffered bad head injuries as a result of falling from his bicycle.

“This was 13 years before my grandfather died and when my father confirmed to me that there was no other Michael Kelly in Kilpheak, we knew it was him and we finally knew where the brain haemorrhage more than likely came from. Something we never knew was hidden away in the local notes.”

Kieran said he always knew what structure the book would take. “I wanted to have a book that could be read from start to finish or be dipped into at any part.

“I spent probably six weeks at a time researching and writing on a topic for each topic and then would give the first draughts to friends interested in this field, to read over. One person brilliantly told me said it was tedious and I needed to hear that.
“When I first finished the book, it didn’t flow, so I went back and focused on the people. I wanted to have a particular focus on the people of the town, that was very important to me.”

As a teacher Kieran wanted the book to be exciting and fun, while as a historian it was very important to him that it was factual. “Previous historians were wrong, but this was not deliberate, it was as accurate as it could be, based on the information available to them at the time.”

Kieran made sure to source all the information given, so people can refer back to those and find out where he got his information from.
“This is my opinion of the history of Letterkenny, based on my research. History can always change. The past can never change, but history is always changing based on what we find out. Who knows, maybe in 20 years time someone may have more information available to them than I did.”

Kieran said he is so grateful to all those who offered him help and guidance throughout this long project in particular his family in Letterkenny, parents Hugh and Brigid and siblings Patrick, Mary, Brian, Cliffy and Cathy, and his fiancée Olivia (Wilson).

At tonight’s launch a play written by Kieran to teach local history to national school children will be performed by actors Eoghan Mac Giolla Bhríde, Nora Kavanagh and Patrick Quinn and after a short talk by the author himself a reception will be held in the theatre foyer.

Letterkenny – Where The Winding Swilly Flows is available to purchase online and will be shipped anywhere in the world. Order via www.letterkennytown.com