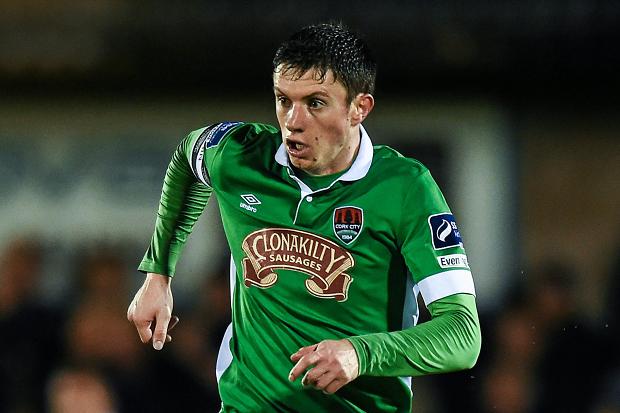 JOHNNY Dunleavy has always dreamed of nights like this.

As a trainee and then as a young professional at Wolverhampton Wanderers, Dunleavy had a Finn Harps scarf and pennant hanging above his bed. The League of Ireland has always been close to his heart.

The young Dunleavy held the hope of one day joining Harps greats like Kevin McHugh – ‘one of my heroes’, he says – but his career path took him to Leeside and the 23-year-old Ballybofey man is at the end of his third season at the club and could enter the history books tonight.

If Cork avoid defeat against Dundalk they’ll be crowned champions (for Dundalk to take the prize, a home win is their requirement) and Dunleavy would become the first Donegal man to captain a League of Ireland Premier Division winning team.

“It’s really exciting this week going to Dundalk with a chance of winning the League,” he says with that familiar enthusiasm.

“It’s brilliant when you think of where we’ve come from – finishing sixth in the last two years.”

Cork’s tale – and indeed that of Dundalk – is a familiar one in the League of Ireland. The club has come from a point in the not-so-distant past when the tin buckets were rattling on the Curragh Road.

It is only three years ago since Cork – under the official title of Cork City FORAS Co-Op due to previous financial difficulties that resulted in the club’s parent company being wound up – won the First Division.

At that time, Dunleavy was kicking his heels in Ballybofey. The summer of 2011 saw him released from Wolves, a knee injury whilst on loan at Barnet, with whom he had made his Football League debut, finally ending his time at Molineaux. He’d signed as a schoolboy in 2006 and made the switch across channel in the summer of 2007. A trial with Vancouver Whitecaps didn’t get any further and he was linked with League of Ireland clubs, including Derry City and Dundalk.
Cork came calling and Dunleavy has settled in Rebel country now.

He says: “When I came back from England, I was obviously disheartened, but I learned a lot about myself in the bad times I had. I had a lot of injury problems so I kind of came back here with a point to prove – not just to other people, but to myself. Cork City gave me that chance.

“The people here were brilliant to me. They were so welcoming and the squad of players is great to be a part of. The people at the club are so good. It really is a home away from home. I’m really enjoying it here and the dressing room is so tight which is great as a player.

“The standard of the League of Ireland took me by surprise. I came in not really knowing what to expect. The League is really underestimated. It’s under-advertised too. The atmosphere and the quality of games is way above what people have in their heads about the League.

“There’s no question in my mind that there are more Seamus Colemans and David Meylers around this country.”

Last November, Cork legend John Caulfield was appointed as the new manager. Caulfield won the Premier Division with Cork in the 1992/93 season and is the club’s record appearance holder (455) and joint top-scorer with Pat Morely on 129.

Dunleavy says: “There was so much excitement around the city at his appointment.

“I spoke to John once he was appointed. Right away you could see the drive and passion he had – not just for the game, but for Cork City. He had a vision of what he wanted. I knew that he could take us in the right direction.

“He has such pride in Cork City. You just wouldn’t believe what the club means to him.”

Caulfield had kept a close eye on Cork, and Dunleavy, from afar.

Despite his relative youth, Caulfield could see the leader in Dunleavy – and handed him the captain’s armband.

He says: “There are so many others who’ve been there and done it in the dressing room. It asked questions of my character that hadn’t been asked before.
“The dressing room is coming down with leaders. Colin Healy went to the World Cup in 2002, there’s Dan Murray, John O’Flynn and Billy Dennehy.”
During the opening game of the season, Dunleavy was sent off in a 1-1 home draw against St Patrick’s Athletic having been booked twice.
Cork grew momentum and were unbeaten in their opening nine games.

He says: “We started well and we went a load of games unbeaten.  As the season has gone on, we’ve got better and we’ve become more ruthless. The players who have been brought in have really added to the squad. We were written off all the way through, people were saying that we’d drop off the pace and wouldn’t stick it.”
Momentum’s rug was pulled from beneath them when Dundalk hit them 4-0 at Oriel in May.

As is their wont, Cork dug deep and kept the pressure on Stephen Kenny’s charges. A 2-1 defeat by the Lilywhites at home in August looked to have been the end, but Cork have shown superb form lately and are ten unbeaten since, winning their last six.

Last Friday night, the pendulum shifted and Cork again are at the controls of their destiny. Their own 1-0 win over Bohemians came on a night when Dundalk were held 1-1 at the Carlisle Grounds by Bray Wanderers.

“We knew nothing about Dundalk until after our own game,” Dunleavy says.

“We heard nothing at half-time. The only thing that it changes is the dynamic of Friday’s result, but really it changes nothing for us – we were always going to be going to Oriel Park to win the game.

“Dundalk are a really good team, but we were never going to be going to sit back for a draw. That’s the way it is here: We play to win. This is why you be in the game, for these pressure games and these big nights.

“There is a certain pressure this week, but that’s just part of the game we’re in.”

Dunleavy recently signed a one-year contract extension at Cork. The hope at the start of the season was getting into Europe. The big nights will return again next year and avoiding defeat on Friday would see Dunleavy leading Cork out next summer to the sounds of that well-known composition by George Frideric Handel, otherwise known as the Champions League Anthem.

His father Brendan – who played a remarkable 137 games for Donegal in the 1970s and 80s, winning an Ulster title in 1983 – will be among those wedged into Oriel Park.

Cork have been no strangers to these games. In 2005, O’Flynn and Liam Kearney netted the goals as Cork scored a 2-0 win over Derry City on a dramatic final day win that saw Dan Murray presented with the trophy. Tonight, Dunleavy could emulate his team-mate and, albeit in the Cork colours rather than the blue and white of Harps, replay those childhood dreams.