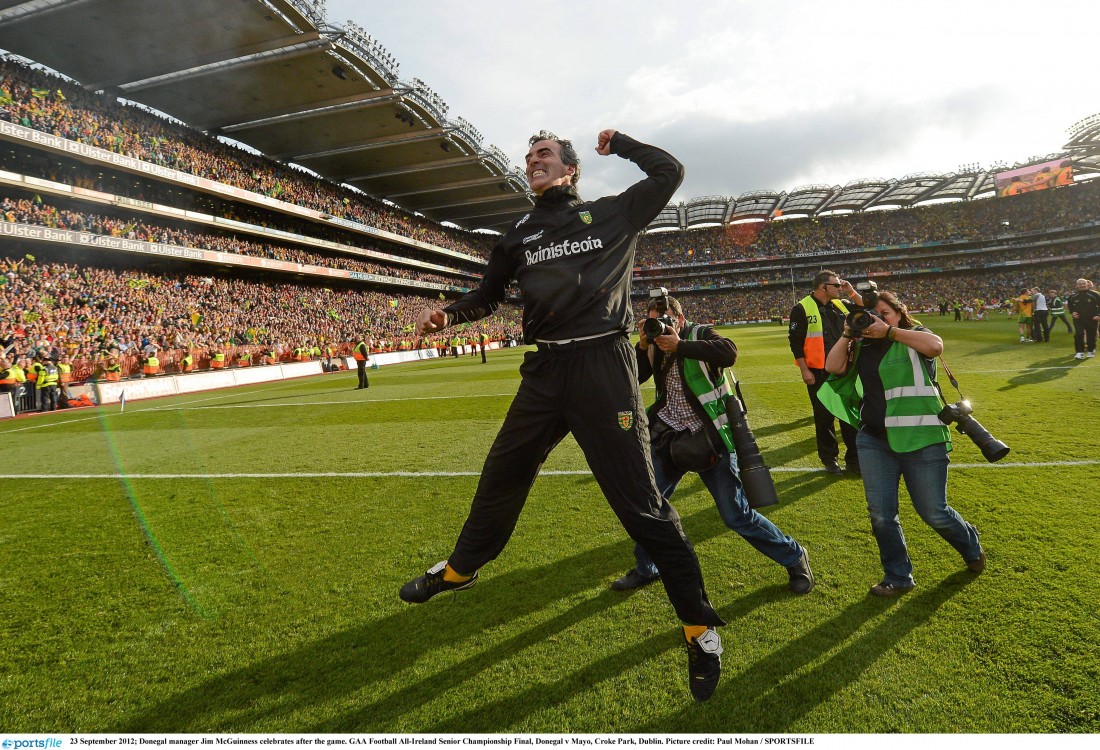 Jim McGuinness celebrates after Donegal won the All-Ireland in 2012.

JIM McGuinness’s tenure as the Donegal senior football team manager amounted to sixty-six games between McKenna Cup, National League and Championship, but what defined the Glenties man’s reign were the 24 championship games under his watch.

McGuinness placed little emphasis on the League, or more accurately League results, and used the spring months to ‘road test’ his Championship plans. He had little love for the McKenna Cup and in 2013 gave it to Maxi Curran and Rory Gallagher as a pre-season of sorts for the county under-21s.

This year, as his first year in 2011 had been, was different with some of the heavy artillery called upon from the get-go.

It was in the championship where McGuinness shone.

In winning 13 of his 14 Ulster battles, a record that saw Donegal win three out of the last four Ulster titles, McGuinness proved himself one of the modern masters and in an oversell sense his achievements see him join the pantheon of the great Gaelic football managers of all-time.

That is especially so when you consider what he took over.

Donegal hadn’t won an Ulster Championship game since 2007 when McGuinness took over. Michael Murphy, for instance, had never won an Ulster SFC match when he led Donegal out for a clash with Antrim in May 2011.

Between 1995 and 2010, Donegal had won just 12 games in Ulster. McGuinness beat that total in his short term as manager. He was a spectator in Crossmaglen in 2010 when Donegal became the first county to exit that year’s Championship, humbled by Armagh on what was billed as one of Donegal’s ‘darkest days’.

Some days later John Joe Doherty resigned as manager and Anthony Molloy reckoned that ‘God almighty wouldn’t win anything with this group of players’.

McGuinness proved the man with the Midas touch.

The under-21s of 2010 laughed openly at training when they were told by McGuinness that they’d win Ulster. McGuinness was stunned. As it panned out they not only won Ulster but came within inches of winning the All-Ireland, heart-achingly losing out to Dublin in the final as Michael Murphy’s late penalty shook the Breffni Park crossbar.

Some months later he met the bedraggled senior players in Downings and began to convince them  they they could and would succeed.

He convinced Kevin Cassidy to end retirement plans, coaxed Michael Hegarty out of exile and transformed men like Ryan Bradley and Colm McFadden. He gave a new batch of young stars the belief and the platform to become heroes.

In July 2011, Donegal defeated Derry and the Anglo-Celt arrived at the Diamond in Donegal town for the first time in 19 years.

The trick was repeated twelve months later when Donegal turned the screw on Down.

They became the first county to win Ulster two years in a row from the preliminary round and were the first Donegal side to retain the provincial title.

By then, Cassidy had been cut adrift, McGuinness having wielded the axe the previous winter because of the Gaoth Dobhair man’s collaboration with Declan Bogue for his book ‘This Is Our Year’.

The headlines were never far away as McGuinness became one of the GAA’s most high profile figures. Whenever he spoke, journalists listened intently and his words were never hollow. Always, there was a message worth heeding.

In September 2012, Donegal – after beating Kerry and Cork along the way – went daft when Donegal beat Mayo in the All-Ireland final. Murphy and McFadden goaled as Donegal welcomed Sam back across the Termon Bridge in Pettigo. The whole of the moon appeared into view.

One of the big topics when it came to discussing McGuinness’s time as Donegal manager was ‘the system’. With McFadden as a lone-attacker in the 2011 semifinal against Dublin, Donegal took Gaelic football onto a new page.

It was a system based on the core values of what McGuinness demanded from his players: hard work and honesty.

In 2013 the music died as Donegal relinquished their Ulster and All-Ireland titles in an injury-ravaged campaign. With a change in the backroom team and with a new focus to the group, McGuinness stayed on for another go and reclaimed Ulster this July before his greatest hour arrived on August 31 when they shattered reigning Sam Maguire holders Dublin, in a never-to-be-forgotten semi.

Their performance levels never hit those same heights in the final two weeks ago and the goals by Paul Geaney and Kieran Donaghy ended the year in disappointment and, ultimately, brought the curtain down on McGuinness’s spell as manager.

The following night 6,000 appeared in Donegal town to give their appreciation. In 2011 just over 7,000 attended MacCumhaill Park for a game against Antrim that was the Glenties man’s first senior championship match as the county’s manager.

For players, supporters and the county, McGuinness turned hope into expectation. He made Donegal believe and he made Donegal proud again. The county colours are worn and flown now with a burning pride that has rarely been felt before.

Where and it mattered he has left a legacy: in the hearts and minds of his people.

The Jim McGuinness years will live long in the memory.