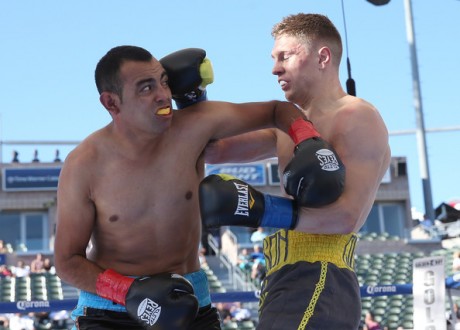 Jason Quigley on his way to defeating Fernando Najera in August

JASON Quigley will face Serge Cadeus in his third professional fight in Boston on October 30, with Inishowen man Michael McLaughlin featuring on the same card.

Quigley (2-0) takes on the Miami-based Cadeus (1-0) at the Plymouth Memorial Hall in what will be  his debut in the Boston area with Golden Boy Promotions hoping to get a big Irish contingent in for the night to showcase the Ballybofey man.

The 23-year-old traveled back to his Los Angeles base with his father and coach Conor late last week and the Finn Valley ace is now deep in preparation for fight number three. Following his wins over Howard Reece and Fernando Najera, Quigley goes in search of a three-from-three record at the end of the month.

Cadeus, ‘The Haitian Assassin’ as he has styled himself, has won his only professional bout to date. In August, Cadeus, who hails from Brooklyn, took a unanimous decision win against Yoeglys Duverger at the St Pete Times Forum in Tampa, Florida. The highlight of Cadeus’ low-key win was a flash knockdown in the second round.

Quigley, snapped up by Golden Boy early this year, needed just 82 seconds to dispose of Reece in his debut at he MGM Grand, Las Vegas in July before an impressive win over Najera, who didn’t rise from the stool for the fourth round of their bout in Carson’s StubHub Center in August.

Danny ‘Bhoy’ O’Connor and Virginia’s Andrew Farmer will battle it out in headline bout, which was postponed from St Patrick’s Day because of an injury to O’Connor.

In the co-main event, lightweight contender Sharif Bogere takes on Aaron Melgarejo in a 10-round matchup.

Quigley’s match-up against Cadeus will be televised and is listed as the tv opener.

“The greater Boston area is proving to be one of our favourite stops as we bring Golden Boy Live! around the country,” said Oscar De La Hoya of Golden Boy Promotions.

“The fans here are loud, energetic, and diehard – everything we want to see and hear when we come to town. This will be a good one.”

It will be a special night for Donegal boxing as Carndonagh native Michael ‘Owen’ McLaughlin also features.

The American-based light middleweight takes takes a step up in class as he fights Dereck Silvera (10-1) in a six round contest. McLaughlin (8-1-1) saw an Irish title fight fall through this summer and hasn’t been in action since his win over Pedro Gonzalez in Dorchester in April.