JASON Quigley is ready to ‘light up Boston’ in his third professional fight this Thursday night.

The 23-year-old Ballybofey man takes on Thomas Gifford at the Plymouth Memorial Hall where he aims to take his record to 3-0 following wins in his first two pro contests, against Howard Reece and Fernando Najera.

Quigley is rapidly gaining followers in America and Oscar De La Hoya’s Golden Boy Promotions, with whom Quigley is aligned, have linked up with Ken Casey’s Dropkick Murphys for Thursday’s televised show.

Quigley’s cv has impressed the Americans and Golden Boy Promotions and the Finn Valley ace’s management company, Sheer Sports, will be hoping to tap into Boston’s huge Irish contingent this week.

“They don’t call us the fighting Irish for nothing – we have fought for everything we have and it’s a very proud time for me to be representing my country,” Quigley sadi.

“I’m so excited to be fighting in Boston.

“Boston is a great town with great fight fans and for me to be fighting my third pro fight at the Plymouth Memorial Hall in front of the Irish crowd is fantastic.

“I will put on a great show for the crowd, I already know it will feel like I’m fighting back home in Ireland, I’ll have goosebumps as I walk to the ring on fight night. I can’t wait.”

After an interview with Quigley, Gerbasi tweeted: “It’s the little things that show you who a fighter is. Today’s example ‪@jay_quigley – asked him about having a target on his back as a Golden Boy fighter. ‪@jay_quigley‘s response was that he was well aware that his opponents want to (pause) do well against him…he wouldn’t let the phrase “beat me” come out of his mouth. Basically, losing is not even an option. That’s how a fighter thinks.”

Quigley downed Reece in his July 12 pro debut at the MGM Grand in Las Vegas. He scored another impressive win when he pummelled Najera at the StubHub Center in Carson a month later. Najera took fierce punishment from Quigley and eventually the brave Mexican didn’t answer the bell for the fourth round of their contest.

Quigley had originally been pencilled in to fight Miami’s Serge Cadeus this week, however Gifford, of Hot Springs in Arkansas, is now listed as the opponent for the 2013 World Championship silver medallist.

Gifford (2-2-1) won his debut bout via TKO against Akou Anieth in Shreveport, Louisiana, but that was three years ago, in October 2011 – and Gifford has had just four fights since.

The 22-year-old lost against Deandre Neal in Opelousas, Louisiana in March 2012 before his bout in his native Arkansas against Dennis Williams last October was called a draw.

In November he overcame Corey Richards in a unanimous decision in Tunica, while he lost out to Lanell Bellows on the undercard of the Floyd Mayweather-Marcos Maidana World welterweight tussle at the MGM Grand in May. Bellows downed Gifford in the opening hand and, while Gifford continued, it was only a matter of time – and Jay Nada, the referee who also took charge of Quigley’s bout with Reece in July, called a halt 1:17 into round 2.

Quigley, trained by his father and coach Conor, who will again be ringside with his son on Thursday – “When I look to my corner, I see blood,” Quigley says of their close relationship – returned to his California base in late September after spending some time back in Ballybofey.

Now, the aim is for the sheet to remain clean and get number 3 on the card. 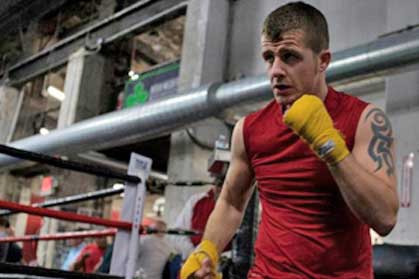 ALSO on Thursday night, Quigley will be joined on the fight night by local favourite Michael ‘Owen’ McLaughlin, who hails from Carndonagh.

McLaughlin has lost just once in his eight pro fights, his record reading 8-1-1.

He hasn’t been in action since defeating Pedro Gonzalez in April and he saw an Irish title fight fall through during the summer months. McLaughlin still has his eye on the vacant title most recently held by Frankie Gavin.

McLaughlin had been due to take on New England’s welterweight kingpin Derek Silveira (10-1) on Thursday night, but the card now shows him set to fight rookie Wayne Harnoise (0-1-0), who lost against Gerald Schifone last October in his only pro bout to date.