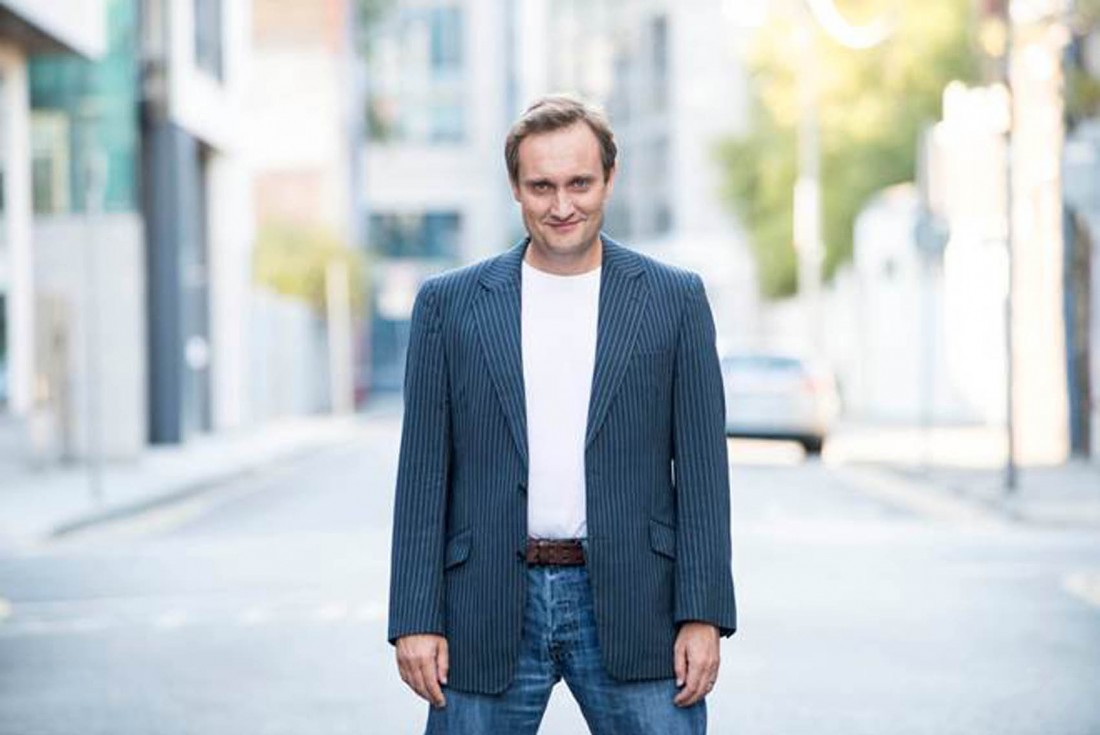 BY SEÁN P. FEENY
AFTER four years Mario Rosenstock makes a very welcome return to the county for his third instalment of Gift Grub Live – and this time he expects the people of Donegal to talk!

The hugely popular satirist last visited the county in March, 2010 on his very first tour of Gift Grub Live and what he encountered was a people not willing to give anything away.

Dressed as well-known RTÉ broadcaster Joe Duffy Mario went through the audience at the Aura Leisure Centre in Letterkenny, but no one would ‘Talk To Joe’.

“The last time I was in Donegal, I had a very interesting encounter with the audience. During the show there is a very large amount of audience interaction and it was like that everywhere we went on tour, apart from Letterkenny.

“The people of Donegal were the least responsive and I thought ‘What’s going on here? Why are they so resistant to discussing things about themselves?’. They just didn’t want to talk to me and didn’t want to be interviewed by ‘Joe’.

“Someone later told that people in Donegal just weren’t as quick to give out information, so what happened after the tour really surprised me.”

After the first Gift Grub Live tour ended Mario started receiving a lot of messages from Donegal. “I started getting all these letters of appreciation from people who had been to my show in Letterkenny.

“The letters were so lovely and polite and people said how much they enjoyed my show. I actually mainly only got letters and messages from people who were at the Letterkenny show. I really appreciated that so this time around get ready to talk people of Donegal,” he laughed.

Earlier this year, Mario sold out 20 shows around the country in April and May and now, due to phenomenal demand, he is back on tour for the second, final leg of Gift Grub Live 3.

By the time he lands in Donegal for his dates in Letterkenny (Friday, October 24, Clanree Hotel) and Bundoran (Saturday, October 25, Holyrood Hotel) he will already have done six shows with eight more to go before the end of November.

Mario said the show has developed a lot since he first took to the stage with Gift Grub Live back in 2010. “You learn as you go along and make changes as the ambition for the show grows. For instance, I start this show as Miriam (O’Callaghan) and within 30 seconds I change into hotelier Frances Brennan,” he laughed.

As well as the old favourites such as Keith ‘Howya Buddies’ Duffy, Joan Burton, Daniel (O’Donnell) and Roy (Keane), there are also some of Mario’s newer characters featured, including Vincent Browne, Bono and The Edge.

He said: “Roy has always been up my street from the very beginning and of course there is always something happening with him, particularly now. I am actually currently on the lookout for a beard, as I can’t go on stage as Roy without the beard now,” he laughed.

Doing Gift Grub on Today fm’s Ian Dempsey Breakfast Show for 15 years now, characters like Roy have been with Mario nearly all the way. “It’s been Roy overload at times, there has been so much going on with him. I could nearly write the unauthorised, unofficial, ghost-written biography of Roy Keane now,” he laughed.

“With some older characters I have come up with ‘devices’ for them; one of those is Daniel who becomes the host of the ‘worst ever’ game show in Gift Grub Live 3.

Mario said he loves doing the show live and as he only goes on tour every tour years, guarantees his audience a brand new material every time.

“The show has become more physically demanding with each tour, but as long as I am able to do it, I will tour. The crowd gives you an incredible energy. You can’t hear the people laughing on the radio so there’s nothing better than hearing 3,000 people enjoying your show.”

It has been four years since Mario was last here and it will be a while before he is back so make you don’t miss Gift Grub Live 3 as it will also introduce the one character nobody has ever REALLY met before – Mario Rosenstock himself!

Tickets are on sale now and can be purchased from Ticketmaster outlets nation-wide or call Tel 0818 719 300 or log onto www.ticketmaster.ie