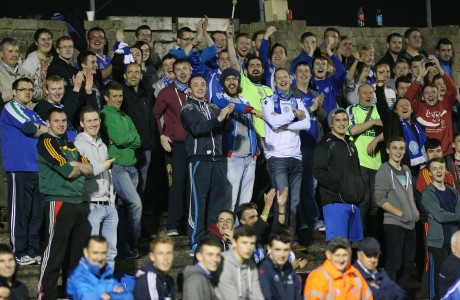 A section of the Finn Harps faithful in high spirits as they watched their side defeat Avondale United in the FAI Cup quarter-final replay. Photo: Gary Foy

FINN Harps expect to be backed by a vocal contingent of around 500 supporters for Sunday’s semi-final against St Patrick’s Athletic at Richmond Park.

Of an initial allocation of 500 tickets, Harps had sold 360 by early on Wednesday afternoon.

“We have taken a lot of calls from people down the country who are looking to go to the game and we’ll get a meeting point set up for those people on Sunday to collect their tickets,” Harps’ Commerical Officer Aidan Campbell said.

“We will definitely have close to the 500 sold and I expect our actual support in the ground to be more than the 500 mark because there will be people who will turn up at Richmond Park on the day.”

The crowd will include two teams from the Finn Harps Academy who will play St Patrick’s Athletic teams on Sunday morning. The 54 Crew Finn Harps Supporters Club have three busses leaving Donegal on Sunday to add to the noise and colour.

Mr Campbell said: “There has definitely been an increased buzz around the club since we won the quarter-final replay against Avondale.

“The last couple of weeks have really brought home the message that the first-team is the heartbeat of the club.

“The success of the first-team really is the key. All the other elements of the club are great, the academy, the schools work, the community work, but to really reap the harvest the first-team is the one.

“We’ve really seen it with our online platforms, the views on the website, the likes on Facebook.

“There are people who have come in to buy tickets that we haven’t seen around in quite a while. It’s great to see those people back interested in the club again.

“Sunday will help the profile of the club and with the numbers we have going to the game it will show people that we do have a brilliant support base behind us.”