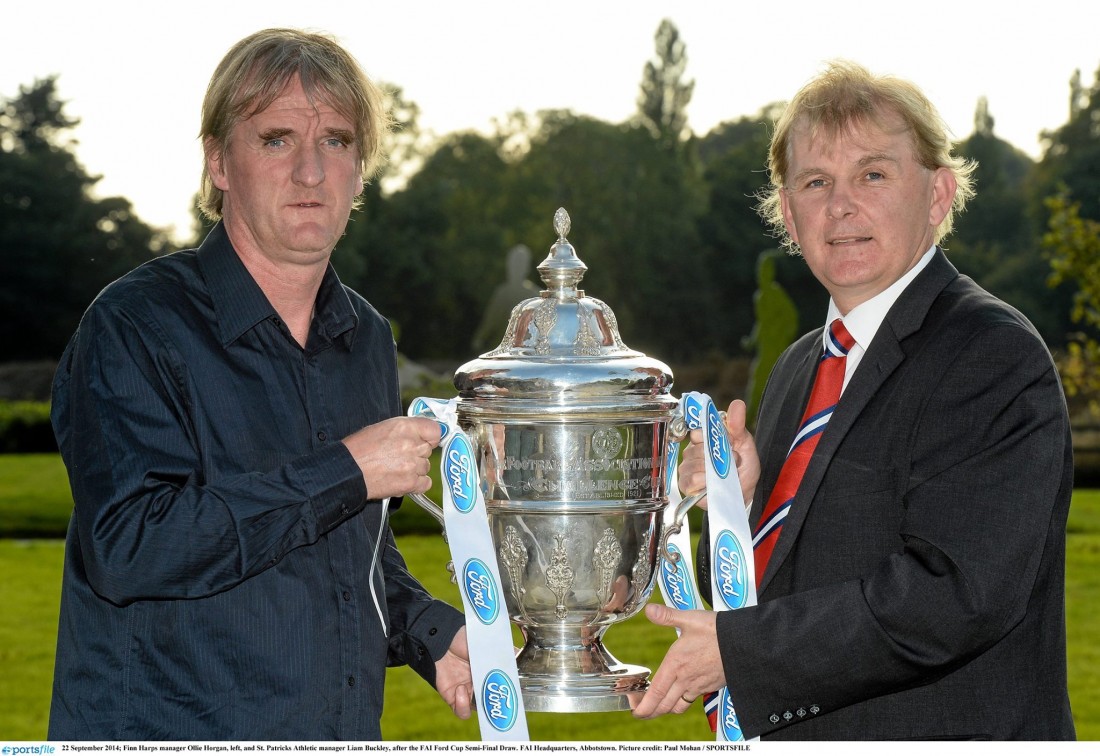 FINN Harps are ninety minutes from a first FAI Cup final appearance since 1999, but will need the upset of all upsets to make it to the Aviva Stadium as current Premier Division champions St Patrick’s Athletic stand in the way of Ollie Horgan’s men in Sunday’s semi-final (Richmond Park, 1.45pm, live RTE 2).

Harps haven’t contested a semi-final since they beat Galway United to reach the final fifteen years ago and this is only the sixth time in the club’s history that they’ve reached the last four.

That it comes in Harps’ 60th anniversary year and falls forty years on from Harps’ only winning of the Cup in 1974 gives rise to the romantic notion of the Ballybofey side, the sixth-placed team in the First Division, reaching the decider, but as 20/1 outsiders Harps are aware that the odds are stacked against them.

“This squad has great character,” Harps captain Kevin McHugh – the only survivor from the class of ‘99 – pointed out.

“We won’t lie down to anyone – not in the biggest game of the season anyway. We’ve only been outplayed in two games this season – in Waterford and in Galway. We know what we’re going into on Sunday though – we’re massive underdogs and rightly so.

“We do have players to make them worry, but if the two teams play to their potential, well, we’re in trouble. I’m not saying we will turn around and beat Pat’s but we aren’t going there to be pushovers.”

Pat’s haven’t won the Cup since 1961, but Liam Buckley’s team are hotly tipped to reach the final this time around, two years on from a final defeat by Derry City.

“Finn Harps are underdogs but we have to perform to beat them,” said the Pat’s captain Ger O’Brien.

“We can’t have any mistakes, no slip-ups and please God if we do, we’ll win the final. Hopefully this group will use the memories of 2012 to spur us on.”

St Patrick’s Athletic needed a replay to get past First Division outfit Shelbourne and Harps can draw some comfort from the showing of a Shels team they beat 3-2 in Ballybofey last Friday.

Horgan, in his first season in charge of Harps, will be buoyed by a sizeable Harps contingent that is expected to number around 500.

“I hope we can come out with dignity, that we can empty the tank and make a game of it,” the Harps boss said.

“Basically, we need to keep the tie alive for as long as is possible.”
Harps have beaten Belgrove/Home Farm, Wexford Youths and Avondale United  following a quarter-final replay to reach the semis.

“Everyone is saying we haven’t faced any Premier League sides but we can only beat whoever is in front of us,” Harps goalkeeper Conor Winn said.

“Finn Harps are a good cup team, they always were and it’s a cup game so you never know what is going to happen in a cup match.”