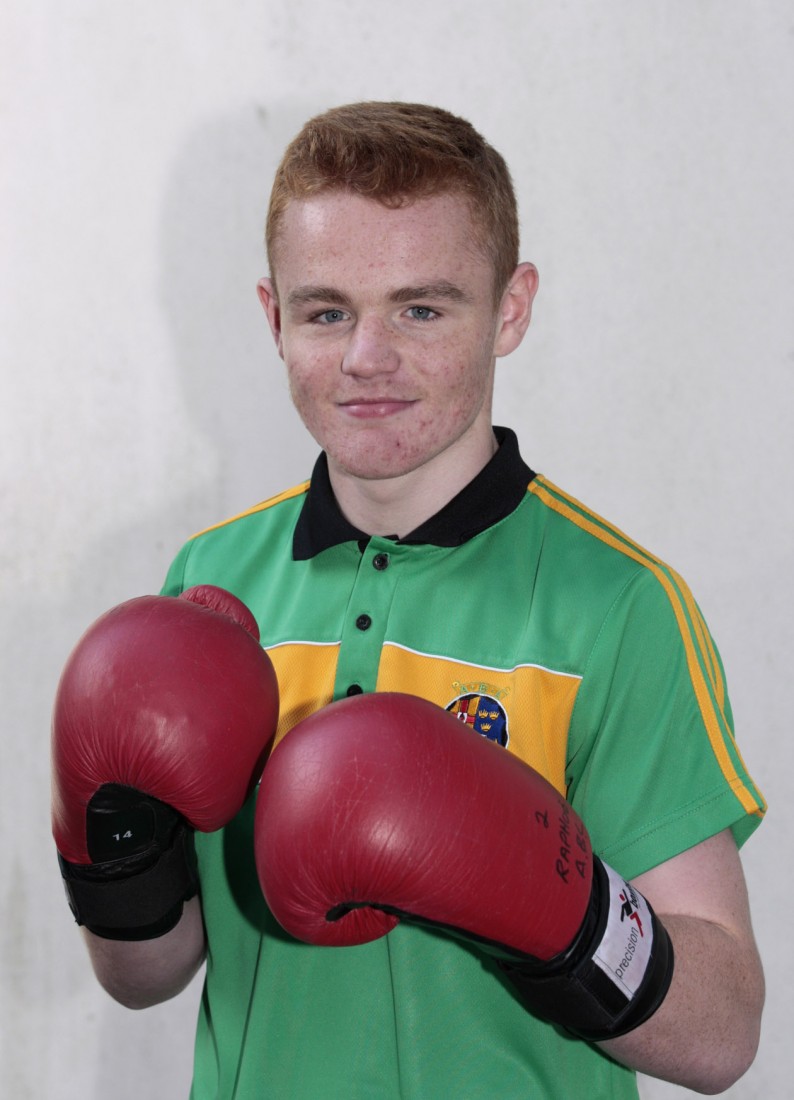 BRETT McGinty is targeting a place among the medals at this week’s European Junior Championships in Anapa, Russia.

The St Johnston man boxes at 70kgs and is in Russia for the third year running. A bronze medalist at the 2012 European Schoolboy Championships, he’s back in the Junior Championships a year on from he made an early exit.

McGinty won his sixth Irish title at the end of July to confirm his place on the place – and the Oakleaf ABC puncher is gunning to get onto the podium.

“I really want one. My big aim this year was to get to Russia. I remember in 2012 coming back into Dublin airport and the Irish supporters were there for us. I had a medal that year and it was some experience coming in with the medal. Last year I had nothing.

“I was a year too young for these Championships last year.

“I can’t wait now. There’s a lot of pressure there because at every meeting the boys are saying how I’m the only one to have been there before. I know what to expect which is a massive help.”

Last year, he bowed out against Sava Parshayev of Belarus but, as he points out himself, he conceded a year to his opponents.

Two years ago, McGinty became the third Donegal boxer – after Steven O’Reilly and Michael Gallagher – to medal at the European Schoolboy Championships. Those were contests that really outlined his promise.

“He’s showed that he has the abilities needed to campaign at the highest level and a promising International career looks to be his future,” Irish team manager Paddy Gallagher reckoned at the time.

He opened up by getting Michael Katz of Israel out of the way and he got onto the medals table thanks to a 19-12 win over Armenian Gurgen Madoyan.

Fate and the luck of the draw handed him a meeting with Russian Havazh Mutsolgov. The home boxer won 10-6, but McGinty showed his steel in a nerveless third round as he went in search of silver. He had to settle for bronze.

He says: “The luck of the draw has a lot to do with it, too.

“The man had strength that was unreal – it was like being in with Ivan Drago! I’ve never felt power like it.

“If I happened to draw Russia again first that would be a tough draw.”

Anapa is a town in the Krasnodar Krai region of Russia, nestled on the banks of the Black Sea and now, for the third year running, McGinty is off to compete early-winter at the Kubanskaya Niva venue.

His year started with promise. Winter wins over Conor Vint had started him off nicely, but when he was controversially beaten by Christopher O’Reilly in a Youth 1 final at The National Stadium he was stunned. Three of the judges gave McGinty the nod, but two of those weren’t included in the scoring. Oakleaf ABC coach Eugene O’Kane was fuming and McGinty was sick.

He says now: “The loss to O’Reilly knocked me back. I knew I could beat him. I thought I won the fight, but he got the call. It did hurt. It was during the Easter holidays from school and I just wasn’t able to get up in good form after I got beaten. What made it worse was that three of the five judges gave me the fight, but two of those were the ones eliminated.

“I didn’t take too long of a break after that. I had two choices: Go away and feel sorry for myself; or go out and win another title.”

He chose the latter.

A bout against Jordan Myers, one of Irish boxing’s biggest prospects, got him kick-started. McGinty defeated Myers at The Pilot’s Row Centre in Derry. He says: “To be honest, I felt really comfortable in that one. He was one of the fancied men in the country at the time. I took a lot out of that one.”

Around the same time, Oakleaf’s Sean McGlinchey was in preparation for the Commonwealth Games. McGlinchey won bronze at light-heavyweight in Glasgow and has been a huge influence on McGinty’s year. The Deele College student was at the Scottish Exhibition Centre to cheer on his club-mate.

He says: “The sparring I’ve been getting has been unbelievable. Every day I go in, I can feel myself getting better.

“Sean has been a great help. He’s so experienced. To even get close to a lad like that is unreal. Without that quality of sparring, I wouldn’t be near as sharp as I am. Sean is very sharp at the minute because he’s in training for the Ulster Seniors.”

McGinty was back to winning ways in July when he defeated Kevin Kehoe in the National Senior Cadet Championship final at 70kgs. That was McGinty’s ticket to Anapa. He had a nervy wait that day, with Kehoe looking like he’d edged a win only for McGinty to dig deep and claw the win during the final thirty seconds of the tense bout.

Now under the direction of the High Performance Team and coaches Billy McClean and Gerry McDaid, McGinty has tailored his own training to suit.

A transition year student at Deele College in Raphoe, he can be found early mornings around the roads of Mongavlin. The McGinty home nestles in the shadow of Mongavlin Castle, a place of historical significance in the locality. McGinty is penning his own chapters of history, having been part of the most successful ever Irish Schoolboy squad in 2012.

He says: “That High Performance training is brilliant – it helps the boxers so much.

“I’m doing less running, but doing more miles when I get out. So, it’s longer runs, maybe six miles now on a Monday, Wednesday and Friday. The aim is for 18 miles a week. I usually do it before school.”

His aims are always high. It’s just the way he is. Even in 2012, he found it hard to accept the bronze at first.

“When I was out there I wasn’t satisfied with the bronze,” he says. “I wanted to get at the final, but when I came back I was happy to have a medal.

“Gold was what I wanted. The way it was, I was just thinking coming back: ‘I can’t wait to get at the Russian again’.”