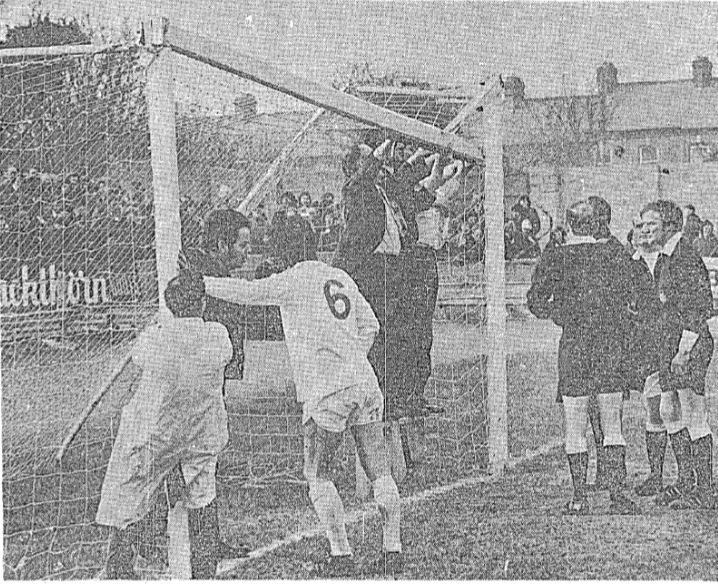 Repairs to the crossbar at Oriel Park in 1974

WITH Harps leading 4-0, Athlone goalkeeper Mick O’Brien was sent off in sensational circumstances after deliberately breaking the crossbar three minutes from the end.

O’Brien had early brought the bar down accidently as he swung from it after saving a shot. However, after Brendan Bradley scored the second of his two goals, O’Brien climbed up and pulled it down.

“He was desperately disappointed at not reaching the final and just climbed up on the spur of the moment,” said Athlone secretary Martin Nolan.

Harps manager Patsy McGowan blasted: “He turned the whole affair into a comedy show and my worry is that it takes away from our performance. We played very well and deserved the victory.”

“I heard the crowd laughing and cheering and couldn’t figure out what was going on,” Brendan Bradley remembered.

“I looked back and there was Mick up leaning as hard as he could on the crossbar.”

In all, the second-half lasted 68 minutes and Harps had long since secured the win. “Athlone were completely outclassed,” said the match report.

The gate receipts of £2,500 were, at the time, the biggest ever at Oriel Park. Charlie Ferry netted from the penalty spot and Brendan Bradley dashed in to score his first. Terry Harkin somehow got ahead of two defenders to scramble home while Bradley was slipped in by Ferry for his second.

Joe O’Kane took over in goal, but Paddy McGrory played a one-two with Harkin before firing in the fifth.

‘COURAGE and aggresion,’ readers learned, were the reasons for Drogheda United advacing to their second FAI Cup final in five years.

“Drogheda deserved to win,” lamented Patsy McGowan, the Harps manager, afterwards. “We tried to play too much football on a day that wasn’t really suited to this approach.”

McGowan played both Terry Harkin and former Celtic player Brian McLaughlin, who had both been injury doubts before the game.

Drogheda started brightly and George O’Callaghan blew a chance in the 26th minute when he shot wide after connecting to a Muckian cross.

Drogheda hit the winner in the 34th minute. Damien Byrne’s shot was saved by Murray’s boot, but Muckian pounced to head home on the rebound.

Harps thought they were level when Brendan Bradley slotted past Byrne, only for McGuigan to scoop over the bar from almost on the goal-line. Bradley was twice denied by Byrne in the second-half, but Drogheda had the better of the play and Stephens could have wrapped it up only to lob straight at Murray from a glorious position. 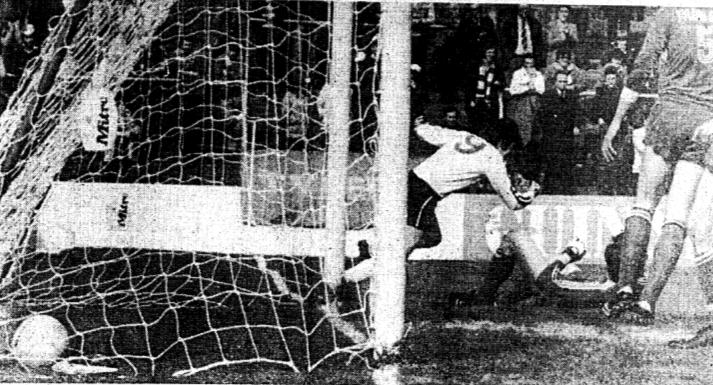 JUST weeeks after his career appeared in jeopardy because of an injury, Mick Fairclough recovered to score the only goal of the game as Dundalk defeated under-par Harps.

After the goal, netted in the 13th minute, Dundalk were, said the report, ‘content to close ranks which they did with superb efficiency and concentrate on tactically outmanouvering and frustrating Harps with a display of unwavering discipline’.

Over the 90 minutes, Harps had no answer to Dundalk and they managed just two shots on target.

Their tale of woe was compounded when Con McLaughlin was sent off in the 75th minute after an incident with Dundalk defender Dermot Keely, who would later manage Harps.

Harps came close to a leveller but, after a John Minnock free came off the Dundalk wall, Eddie McGroarty’s effort was brilliantly saved by Richie Blackmore. The Dundalk goalkeeper did well to beat away a powerful Joe Logan effort in the first half.

The goal had arrived with the game still settling down. Crawley’s shot from the edge of the box was parried away by Charlie McDermott, but Fairclough glided in to side foot home from close range.

THIS was the first FAI Cup semi-final to be shown live on RTE – but it was a poor fare at Finn Park.

“The presence of the RTE cameras and a bumper 6,000 crowd failed to lift a strangely subdued Finn Harps team,” wrote Harry Walsh in his report.

“Billed as one of the most important matches in the history of the club, too many of the Harps players suffered big night nerves.”

Shelbourne had the better of the chances in a tepid contest. Stephen Geoghegan had found a way around goalkeeper Jody Byrne, but was halted by defender Declan Boyle.

Pat Fenlon somehow fired wide from six yards, while Harps’ best chance came right at the end when Donal O’Brien’s attempt was hooked off the line by Tony McCarthy. 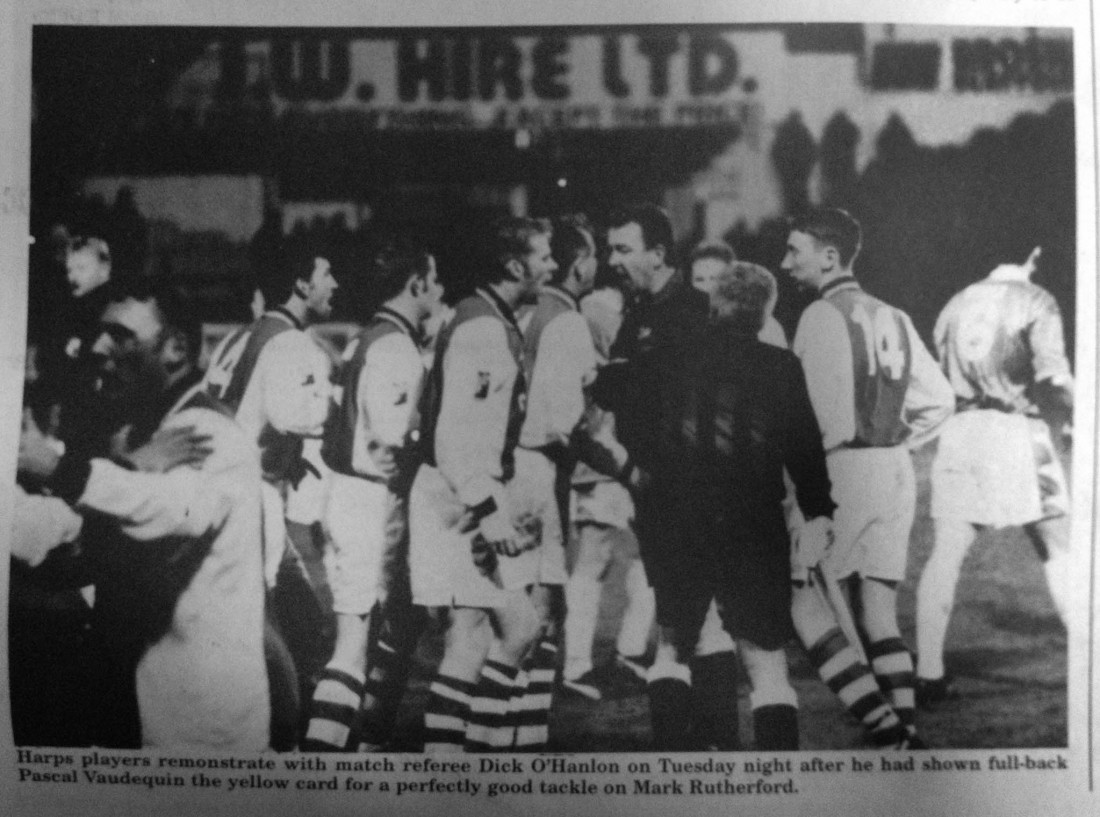 A NIGHT that won’t ever be forgotten by those present at Tolka Park. The air was sour around Tolka Park all night and there was high drama on and off the pitch.

The game was abandoned for 40 minutes just before half-time. Referee Dick O’Hanlon escorted the players off the pitch because of a bomb scare. Two coded messages had been telephoned to the Samaritans in Ballymena and Newry. The 4,000 crowd was evacuated in the space of three minutes. The alert was declared a hoax and the match was allowed to resume.

The tie came alive not long after the re-start. Davy Dowling was sent off for a deliberate handball as he flung himself out to the left to keep out Pat Fenlon’s header. What happened next is one of the most extraordinary moments in Harps’ history. With Harps ‘keeper Jody Byrne behind his line, wiping his gloves on a towel, Stephen Geoghegan tucked the ball into the net. Remarkably, the goal stood and Harps were enraged.

“It has to be the low point of my time,” Byrne later remembered. “I couldn’t believe it and the rest of the Harps players were just chasing the referee. It was a real sickener.” 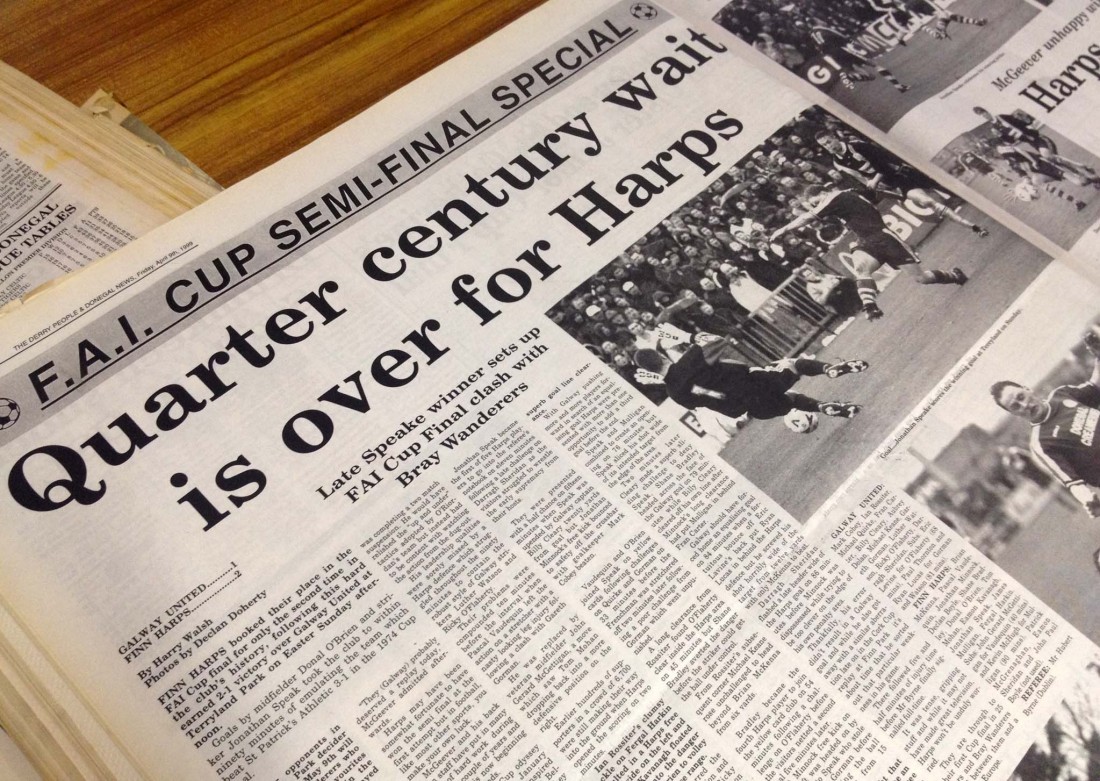 ONE of the greatest days in Finn Harps’ history was Easter Sunday 1999 and a cracking afternoon at Terryland Park.

Harps had been rocked with the loss of the classy full-back Pascal Vaudequin ten minutes before half-time when he was on the receiving end of a horror challenge by Gareth Gorman.

On the hour, Harps found the gold. Minnock’s free was flicked on by O’Brien and Jonathan Speak made no mistake from 15 yards.

“For much of the remaining 30 minutes, Charlie McGeever’s team was forced to defend in numbers as the home side threw everything into the attack,” Harry Walsh reported.

Galway could have got a draw and looked like they’d got it when Luther Watson skipped past Minnock and Declan Boyle before a crisp shot beat McKenna, only for a goal-line intervention by Shane Bradley to keep Harps ahead.