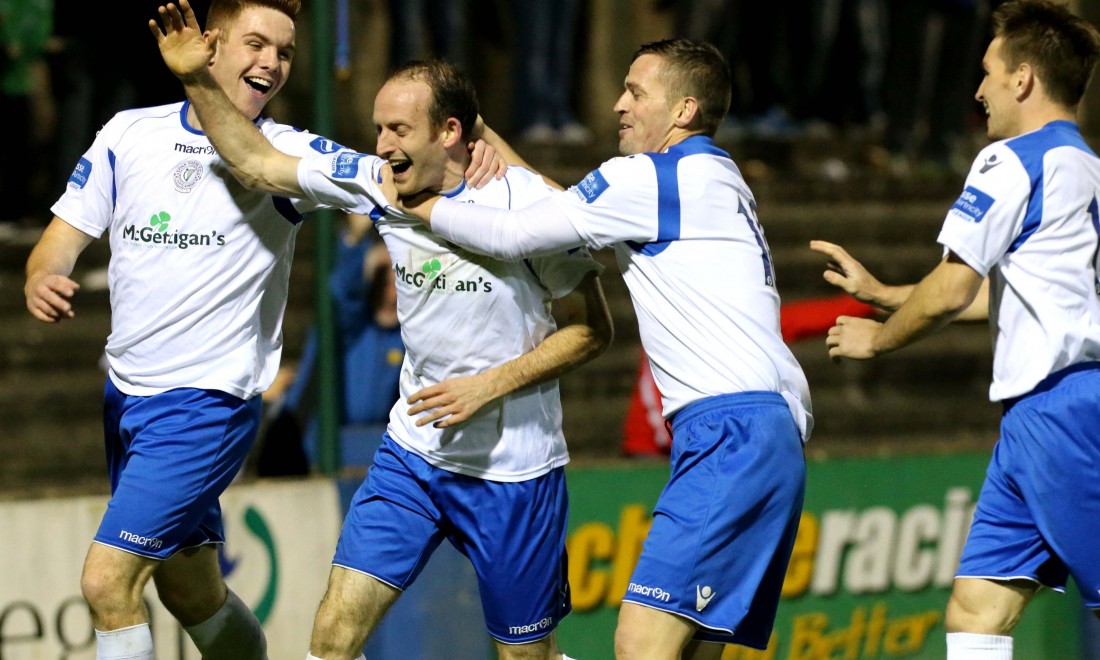 By Chris McNulty at Finn Park

Ollie Horgan’s side have left Shelbourne’s title hopes dangling by a thread and it seems that, barring a massive collapse, even by their own standards, that Longford Town – now four points clear – will take the automatic route back to the Premier Division with Johnny McDonnell’s Shels heading for the play-offs.

For Harps, it was a night that saw them produce one of their best displays of the season and the manner of Funston’s two goals will have pleased them considerably ahead of their FAI Cup semi-final against St Patrick’s Athletic next weekend.

After Damien McNulty cancelled out Gareth Coughlan’s opener for Shels, the sides went in level at the break, but Fuston fired Harps in front in the 64th minute, brilliantly riffling to the net at the back post following a lethal breakaway down the left channel.

Ciaran Coll’s industry saw him steal a march on Adam O’Connor, but it was Gareth Harkin’s overhead ball across goal that caught Shelbourne napping and Funston crashed home.

Shelbourne, needing a win to keep the pressure on top-of-the-table Longford – who won 2-0 away to Waterford United – turned the screw and Dylan Connolly levelled twenty minutes from the end when he got clear and slid under Harps ‘keeper Conor Winn.

There were signs that Shelbourne were wobbling when goalkeeper Nathan Murphy fumbled a cross by Kevin McHugh while Gareth Harkin’s drilled shot was held by the youngster.

However, Harps won it in style on 87 minutes as Funston magnificently curled past Murphy, via the inside of his right-hand post, to the delight of the majority of the 404 attendance, a week out from Harps’ biggest game in some time.

Funston’s second, the match-winner, ensure that for the first time since April 2012 Harps had come from behind to win.

The title-chasers, with news filtering through that Longford were leading in Waterford, hit the front on 32 minutes when Coughlan pounced on Thomas McMonagle’s hesitancy, the defender getting caught under a high ball.

Coughlan zipped in close to the byline and he fired to the far end of Winn’s net when he found himself with only the ‘keeper to beat.

Harps drew level five minutes before the break. Still gasping after O’Connor, just back from a suspension, headed off his own crossbar when Coughlan chopped Funston down, Shelbourne were all at sea when McHugh floated over a corner and McNulty finished emphatically.

For the second home game in a row, McNulty got on the scoresheet, ghosting in round the back and firing past the out-of-position Murphy from the righthand side of the penalty box.

The home side had their chances earlier, but Josh Mailey dipped an effort just over from 20 yards and McHugh had everything right bar the finish on the half hour when he jinked across the edge of the area before shooting over the top.

John Sullivan tried his luck for Shelbourne, but he failed to catch Winn out with a lob just before the break and Harps could sense the game was theirs when Funston powered in his first midway through the second half.

There was a major worry for Shelbourne in the 53rd minute when Gary Dempsey was forced off with what looked like a nasty knee injury, the experienced midfielder twisting awkwardly and writhing in agony before he left the action.

Connolly got in after a rare lapse by Keith Cowan and he got clear of Packie Mailey to coolly finish, just after the same player had shot wide from a promising move and Shels were poised.

Harps looked to be heading for a twelfth draw of a stalemate-laden campaign, but Funston delightfully finished with just three minutes to go to give Harps the win (only their third League win this season at home), handing Shels a first League defeat since July 5 and in the process putting a massive dent in their title hopes.