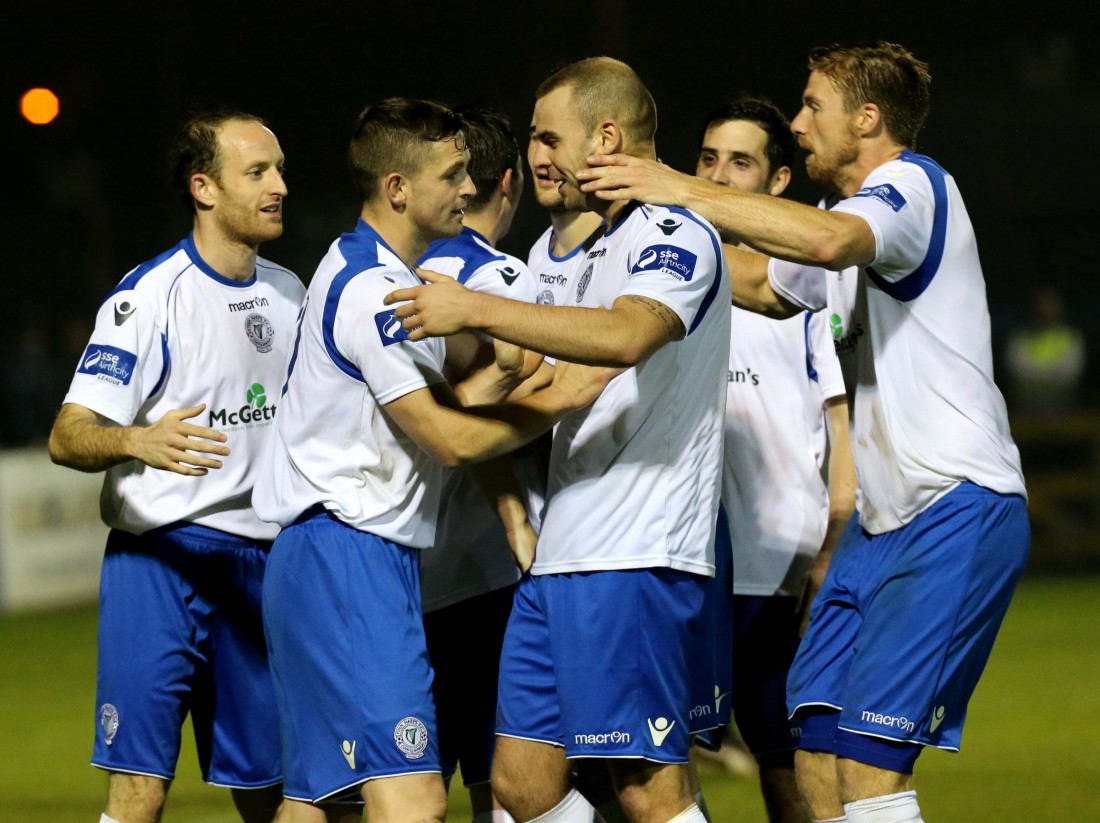 KEVIN McHugh wound the clock back with a second-half brace on Wednesday night to steer Finn Harps into the semi-finals of the FAI Cup for the first time since 1999 at the expense of brave Avondale United.

Fifteen years ago, in McHugh’s first season at the club, Harps reached the final, losing after two replays to Bray Wanderers, and they’re back in the last four for the first time since as the Killea man’s double killed off the Munster Senior League outfit.

Harps led 2-0 at the break as Man of the Match Gareth Harkin and Damien McNulty gave them a comfortable cushion.

McHugh’s quick-fire double on sixty and sixty-five minutes put the game beyond the reach of the visitors, who finished with ten men after goalkeeper Danny O’Leary was sent off in the incident that led to McHugh’s second, a penalty.

Having been denied a berth in the last four by Drogheda United in a replay last season, Harps sensed the opportunity here, but there were palpable nerves among players and supporters for long periods of this one.

“It was a game we just couldn’t afford to have lost,” as one Board member put it afterwards.

793 attended for a timely boost to what was an emptying purse down Navenny Street and they watched as McHugh took his Harps goals tally to 176 for a place in the televised semi-finals.

Avondale have made life difficult for Ollie Horgan in his previous life as the Fanad United manager and the Cork side’s impressive record in Donegal in Cup competitions was surely playing on the Harps boss’s mind.

Avondale, the four-in-a-row FAI Intermediate Cup winners, showed on Sunday in the first meeting that they’d be no pushover as Danny Long’s equaliser cancelled out Michael Funston’s opener to force a replay.

When Ray Lally forced Conor Winn into a fine save after only six minutes it raised the jitters of the big crowd converged at The Town End.

But Harps hit the front in the eleven minute when Harkin ghosted in to apply the finish to Brian McGroary’s excellent right-wing cross. It was a brave piece of play by Harkin, who stood ground to drive home with O’Leary advancing.

McGroary had a lively start and was looking sharp in those early exchanges, but he was forced to leave prematurely after picking up a hamstring injury. The Drimarone man was the picture of devastation as he left the action.

McGroary came in for Pat McCann in one of two changes to the Harps side from Sunday’s first instalment, with Damien McNulty returning from suspension to take the place of Caoimhin Bonner.

McGroary’s withdrawal came just as McNulty doubled the Harps advantage.
McNulty drilled home first time after racing onto McHugh’s pass. It was the Derry man’s second goal for the club and his first Finn Park goal, coming after a brilliant move.

Moments earlier Graham McCarthy fired wide at the second attempt, his initial shot having cannoned off Packie Mailey and there was a reminder that Avondale weren’t going to be obliging opponents – but Harps took a giant leap when McNulty found the far corner.

On the hour mark, Harps made it three as McHugh finished after Mailey’s effort was blocked by O’Leary from a Harkin corner.

Avondale and O’Leary’s evening descended into misery five minutes later. Mark Horgan’s backpass to his goalkeeper put him in difficulty. Harkin nipped in and was adjudged to have been felled by the stretching netminder, who was red carded by referee Ray Matthews.

Player-manager Dave O’Keefe happened to be the replacement goalkeeper and his first task was to collect the ball from the net as McHugh made no mistake, slamming home to his left-hand side.

The Cork side got a late consolation when Roy Long fired home from Kelvin Connolly’s cross.

By then, it was academic as Harps had long since begun to dream of 1999. Their last visit to the semi-finals was on a memorable Easter Sunday in Terryland Park when Donal O’Brien and Jonathan Speak gave them a 2-1 win over Galway United.