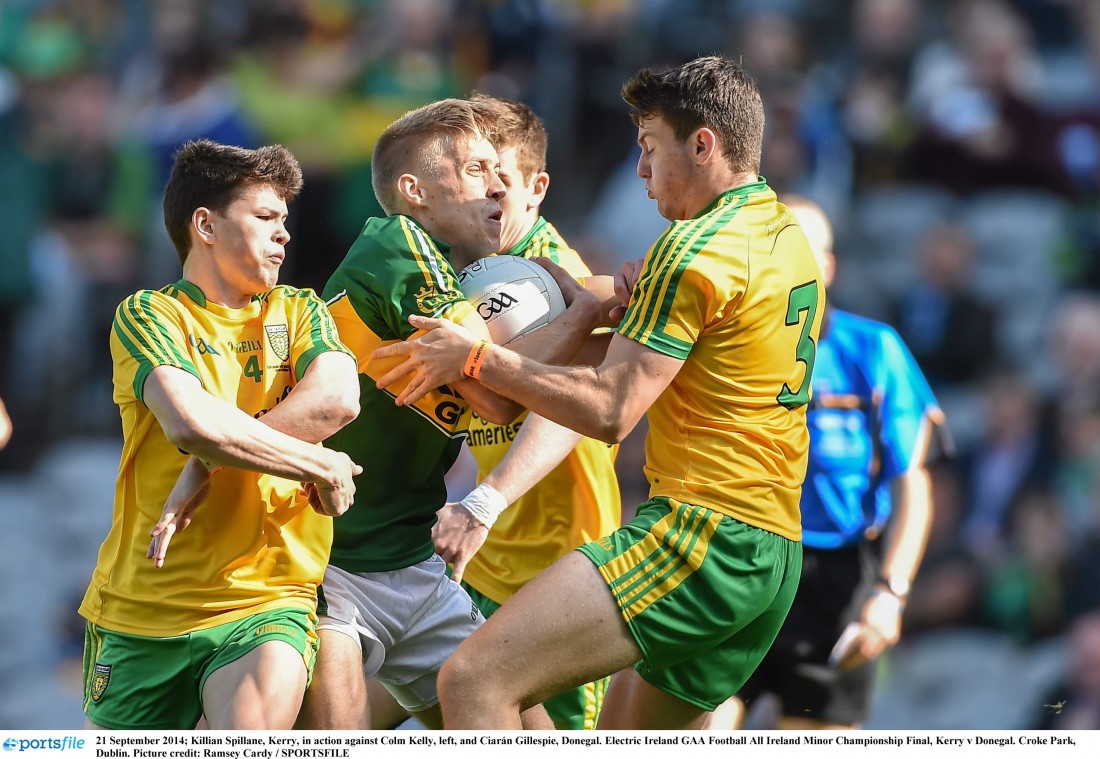 Donegal remain in search of a first All-Ireland minor title after Declan Bonner’s charges succumbed to Kerry’s greater efficiency in a tense curtain-raiser at Croke Park.

Donegal looked down and out with ten minutes to go as Kerry led by six, but they rallied and had Kerry on the rack for a time when Jamie Brennan blasted home a memorable 51st minute goal. Kerry withstood the Donegal fightback with three late scores by Tom O’Sullivan, Jordan Kiely and Killian Spillane.

Donegal will reflect on a day when they could have had further goals. Lorcan Connor was denied by a close-range save by Shane Ryan in the 13th minute. Connor had another effort saved by Ryan late on when Donegal surged with all their might, while Brennan smashed against the post midway through the second half.

Kerry prevailed because of their greater economy and, while Donegal might look back on one they left behind Kerry were deserving of their triumph. Spillane hit six points for Kerry, managed by three-time Sam Maguire winning manager Jack O’Connor, who has guided the Kingdom to their first Tom Markham since 1994.

They did so with those three late scores after Donegal roared into contention as Brennan emphatically powered home a goal, but it wasn’t to be.

Eoghan Bán Gallagher hadn’t played since picking up a hamstring injury in the days after Donegal’s quarter-final win over Roscommon. The Killybegs man didn’t feature in the semi-final win over Dublin, but was a late call-up to the starting XV here.

Ethan O’Donnell performed the late heroics to land a match-winning score as a sub in the semi and, after consistently impacting off the bench, the Naomh Conaill man was elevated to start. Niall Friel made way and, in a move that showed Bonner doesn’t shirk big calls, his captain Niall Harley was also left in reserve.

Stephen McBrearty and Caolán McGonagle, with a massive 50-metre free, had Donegal 0-3 to 0-2 in front by the tenth minute, but that was flipped on its head as Spillane, Barry O’Sullivan and Man of the Match Micheál Burns popped over.

Tomás Ó Sé, an Irish dancing star, was fleet of foot to keep Kerry two in front after McBrearty responded for Donegal, who were ruing the passing up of a chance as Connor poked first time at Ryan after a fine move involving McBrearty and Mulligan.

Gaoth Dobhair man Mulligan and John Campbell kept Donegal’s tally ticking, but Kerry led 0-8 to 0-6 at the break with Spillane brilliantly curling over from play and then adding a free.

Kerry stretched their lead when half-time sub Jordan Kiely curled over three minutes after the re-start. Seconds later, Connor made an exciting jink that almost put him in the clear, only for the Downings man to be dispossessed as the Canal End came into view.

O’Sullivan’s second opened up a four-point lead for the Kingdom, but Donegal stayed in touch as Connor tapped over a free after he’d been pulled back by Dan O’Donoghue.

Kiely was causing Donegal all sorts of problems in the early moments of part two and Spillane fired over a free won by the pacey Dr Crokes man off Stephen McMenamin. Spillane was off target with another free, again awarded for a foul on Kiely.

The Donegal support lifted considerably when Campbell slammed over before Brennan came within inches of evening the scales. The Bundoran man stepped inside of Andrew Barry’s challenge, but a blistering shot crashed off the post with Shane Ryan beaten.

Kerry had the greater economy and when Donegal mightn’t been level in one moment they were four down the next as Liam Carey managed to wriggle some space in a crowded goalmouth.

Carey and ‘keeper Ryan, from a 40-metre free, opened Kerry’s lead once more. The beams were under pressure when Brennan goaled, but Kerry kept the roof on the house.

Tony McClenaghan, who has been one of the players of Donegal’s campaign, was the architect of the goal. A barnstorming run from centre-back saw the Moville man drill into Brennan and the Bundoran man’s finish was sublime, finished with power and precision past Ryan.

The seeds of doubt were appearing for the Kingdom when full-back Brian Ó Beaglaoich sailed wide and, with the Donegal tailed up, it took a brilliant save from Ryan to deny Connor, whose well-struck effort was beaten away by the Kerry netminder.

Brennan landed a free and Donegal, all of a sudden, were within a point, but the clock was ticking rapidly against them and it seemed like Kerry’s day when corner-back Tom O’Sullivan took full advantage of the parting sea to register.

Michael Carroll and flying sub Ciaran Diver were wide for Donegal and in a frenetic finish Cian Mulligan was denied a goal. A crisp low shot through the needle’s eye was brilliantly saved low to his right by Ryan and Kerry could breathe again.

Soon, Jack O’Connor was dancing a euphoric jig that he has become used to on All-Ireland final Sunday.

Yards away, Bonner cut a forlorn figure and the consolation of a history-making season won’t have been felt by the Na Rossa man, a winner to the core. In time, though, this will be remembered as one of the finest group of minor footballers ever to cross the Donegal boundary.