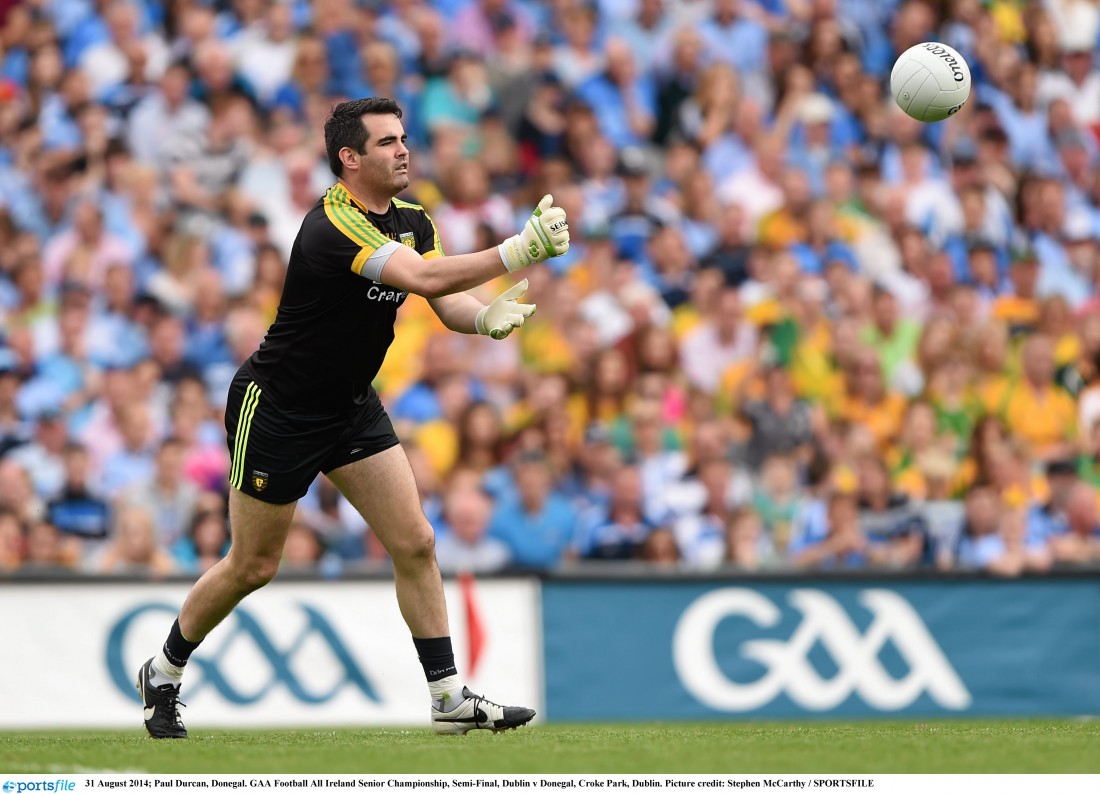 In the twenty-three Championship matches played under Jim McGuinness, Durcan has kept the sheet clean in a staggering sixteen of those.

Take the goal by Chris McGuinness in this year’s Ulster final, coming after a spill by Frank McGlynn – a rarity if ever there was one. Last year’s All-Ireland quarter-final defeat to Mayo was the one day where it went horribly wrong and it hurt Durcan to the core, shipping four goals.

But the Donegal town man has come back better than ever this season and should be knotting the black tie in October to collect his second All-Star award.

It was a save from Durcan from Stephen O’Neill that kept Tyrone at bay in the 2011 Ulster semi-final – a defeat then and who knows how the tape would have spun for Jim McGuinness and Donegal?

Two weeks ago in the All-Ireland semi-final Durcan thwarted Diarmuid Connolly with a fine low save that kept out Dublin’s powerful attacker at a time when the game was threatening to run away from Donegal. Durcan’s save was a critical point in the season and, if Donegal win Sam on Sunday, it will be one of the season-defining moments.

“It was an important stage of the game I suppose,” says Durcan.

“I don’t think he hit it well. I just got the body down and got a knee to it and it didn’t fall to one of their players, which was good.

“There were a few turning points. Possibly we shouldn’t have been that far behind as we were. We dropped three balls into the goalkeeper’s hands which is a no-no against Dublin because they will punish you from those. We were struggling at the time but, in fairness, Christy (Toye) made a big impact when he came on.

“We moved on from there and took the right options and got some very good scores. In fairness, I think our attacking play was exceptional. That’s what I think won the game for us really. They were super.

“They had two goal chances. Neil McGee done brilliantly for the first one. He put the guy off so it does occur in your head. We were that far behind at the time that it didn’t dawn on me but I realise it as the game went on how big it was.”

Durcan will attempt another shut-out against Kerry in Sunday’s All-Ireland final. Donegal’s defensive record is their bedrock – and Durcan is a proud custodian of the number one shirt. Last month, goalkeeping coach Pat Shovelin referenced the extra work Durcan has undertaken this year in a bid to return to the top of the pile.

After the opening Ulster Championship win over Derry in May, Republic of Ireland and Aston Villa star Shay Given – a close friend of Shovelin’s – attended a training session with the Donegal squad in Convoy.

“He was down at one session with us and it was brilliant to train with someone like him,” Durcan says.

“He was a hero of mine when I was growing up and it was a great experience for me. He always texts the boys before the games wishing us luck so we know he is behind us.”

Durcan is pushed on by number two Michael Boyle, regarded as one of the best understudies in the game who has served time as the number 1 himself. The goalkeepers have a close bond and don’t find focus hard to come by even in a small three-man set-up.

Durcan says: “Jim is very good and focused at what he does. He makes it easier. Pat has been a big help too.”

Durcan thinks back now to last August and marvels at how thin the margins can actually be at times.

He says:  “It’s one of those things. A game can turn so quickly. Dublin had two goal chances and didn’t take them Mayo, last year, took theirs and put us too far behind. Games swing on these thin margins.

“I said to my partner there recently that ‘it’s hard to believe where we’ve come from after so many years in the doldrums’.

“We had so many disappointing results with Donegal. It’s great to be at the level we’re at and we’d never take it for granted. In fairness its down to one man.

“He (Jim) brought that level of professionalism and he got the entire group to buy into what he wanted. In fairness, the lads also deserve a lot of credit. They took on what he wanted and when Jim asks us to do anything, we do it.”

Durcan’s kick-outs have improved so much since McGuinness’s tenure began. Shovelin has talked how he heads out to the Phoenix Park and practises by hitting various targets. Accuracy in his game is king – and Durcan is helped by a unique sliced-kick he possesses in his locker.

Watch the ball fly off the outside of the right boot and into the chest of Neil Gallagher or Michael Murphy.

“There is a risk in it but it is something that I could always do,” he says.

“It was something I could always do and I never found it too hard to change direction so it doesn’t bother me now. It is something I do still work on to try and perfect it.

“The tee coming in was a huge thing. The tee has made it a lot more accurate and a lot quicker and even distance-wise you can get more distance. It has made a huge difference in football and one for the better in my mind. It is a possession game now and you are making it a 60-40 where it used to be a 50-50.”

Two years ago, Durcan kept a clean sheet as Donegal defeated Mayo to win Sam. The experience of 2012 has been vital since Donegal booked the ticket back to September’s third Sunday again.

He says: “It definitely makes you savour it a bit more. That experience is behind you so you should try to enjoy it – enjoy training, enjoy the lead up and take it in a little more. It’s about getting your mind on the game and focusing. But it can only help having the experience of 2012 behind us.”