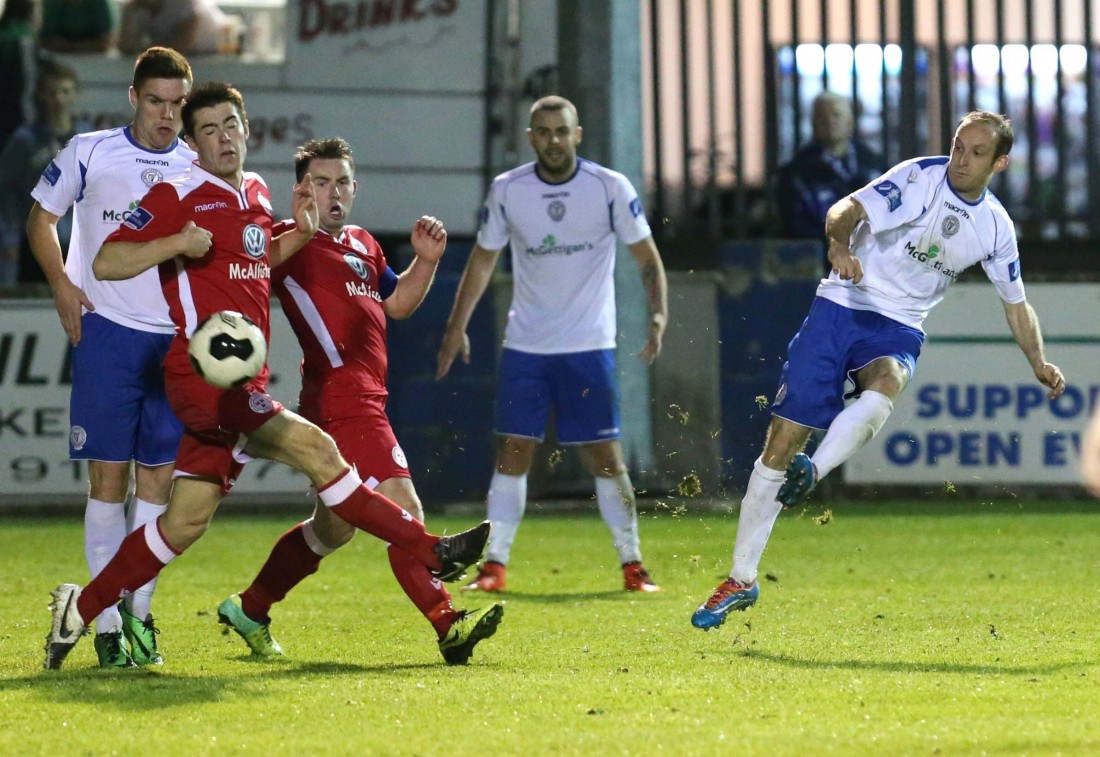 MICHAEL Funston’s double on Friday night included a rare left-footed effort for the archives and the Letterkenny man hailed Finn Harps’ character on a night when Ollie Horgan’s side turned in one of their best displays of the season.

A frustrating campaign has been lifted by the advancement to the semi-finals of the FAI Cup and Harps showed that they can turn it on by inflicting a telling blow to the automatic promotion hopes of Shelbourne on Friday.

“It’s only our third win at home in the League which is disappointing, but it’s nice that we showed a bit of character,” said Funston.

“We didn’t start the brightest and we went a goal down, but we did well to come back from that.”

Gareth Coughlan shot Shelbourne in front, but Damien McNulty levelled and Funston netted either side of a Dylan Connolly goal in the second half.

Funston said: “Dee’s goal set us up for the second half. When we went ahead and conceded again, some teams might have given up at that, but we showed good spirit to push on for the winner.

“We didn’t hold the lead for long. We always feel that one of our strengths is not conceding goals, but we showed good resilience.”

Funston’s first saw him fire home at the far post after a fine attack down the left-hand side and his second, the match winner, was a neat curling effort, cracked past rookie ‘keeper Nathan Murphy with his left foot.

Funston smiled: “Rare would be the word – we’ll put that in the archives!”

Those goals take Funston onto five for the season, sitting now alongside Pat McCann in second spot on the goal charts, a goal behind Ruairi Keating who scored six goals in the first half of the term before returning to Sligo Rovers.

Funston said: “It probably isn’t a great return for an attacking midfielder. Goals have been hard to come by. Ruairi Keating has six goals and he’s long gone.

“The lack of goals has been a sore point for us all, but we’ve kept plugging away. Kevin hasn’t been fit for a lot of the season but it’s great to have him back fit ahead of the semi-final.”

Ten years ago Funston played in the First Division-winning Harps side managed by Felix Healy. By a good stretch he is the most experienced Harps player bar Kevin McHugh. It’s a huge week for the club ahead of Sunday’s FAI Cup semi-final against St Patrick’s Athletic at Richmond Park.

He said: “Winning breeds confidence and it’s good to get a win before the semi-final.

“For any club getting to the semi-final is huge. I’m 29 and will be 30 next year so these opportunities don’t come along too often.

“It’s a big game for the club, but for me it’ll just be another game. We’ll go and give it our best. We know we’re up against a massive challenge.

“Hopefully the revenue will give the club something to build on for next year. We’ll go in confidence and give it a shot.”