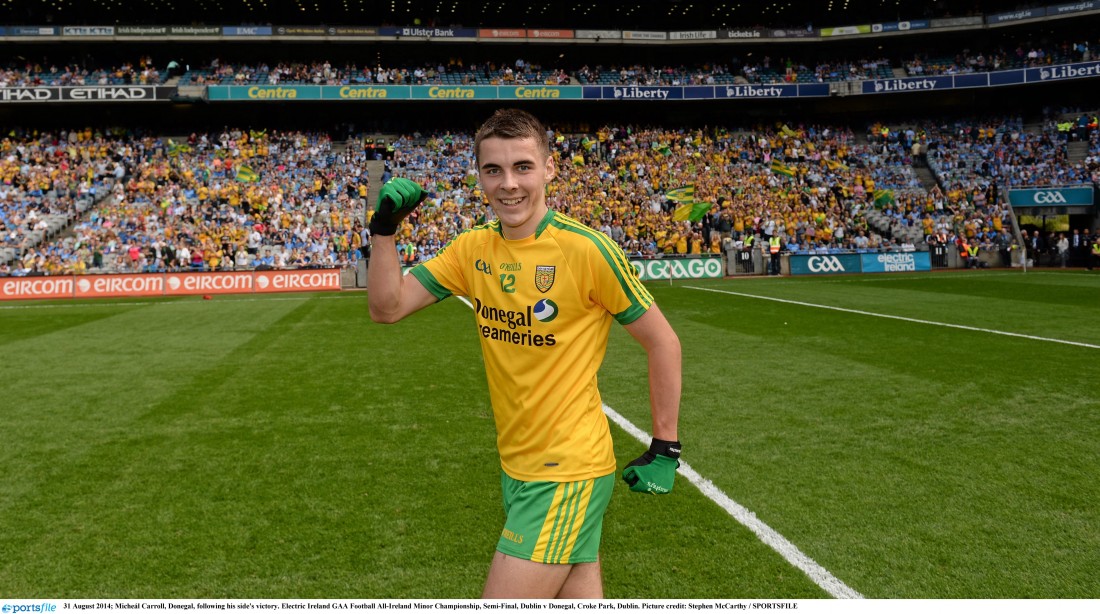 It has been a year of both unbridled join and unbearable pain.

The year started with the loss of his father, Francie. A former Gaoth Dobhair and Donegal player, Francie Carroll was stepped in football.

After a short illness, he passed away in late February. The distinction with which he represented club and county was reflected in the huge numbers who filed to the family home in Derrybeg.

With older brother James based in Abu Dhabi, Michael Carroll has become the man of the house.

It is with the same maturity that he has starred for the Donegal minors this year. He only turned 16 at the end of last year, but he has been one of the aces in Declan Bonner’s pack.

The Pobailscoil Gaoth Dobhair student doesn’t have to explain what winning this Sunday’s final against Kerry would mean.

“It would be more special because of the tough times,” he says.

“It has been tough off the field, but I’ve had a good year on the field. I want to win this final so much. I’d love to come home with an All-Ireland minor medal this year.

“It is something I’d have dreamt about growing up in Gaoth Dobhair.

You might think of doing it with the seniors later on in life, but to be here now at sixteen is great. The chance to play in an All-Ireland final might never come around again so I just have to grasp it.

“It’ll be a hard task, but we have the work done.”

He landed a fetching point in the Ulster final win over Armagh and had a big influence in the All-Ireland semi-final defeat of Dublin.

The rangy Gaoth Dobhair clubman has so much in his locker that, even now, he’s been earmarked as a future star.

“I’m happy with my own performances, but I know that I can give my best one yet in the final,” he says.

“Everyone in the squad wants to go now and give the game of their lives. It’ll take that against Kerry. They have looked good so far, but we have an awful lot of hard work done ourselves and that game against Dublin will stand to us hopefully.”

“I’ve been watching games in Croke Park since I was a young boy and you don’t realise the atmosphere – it’s deafening. You couldn’t hear a word for the second half. It’s wonderful and you have to enjoy it. At the same time you have to switch off from the crowd and all of that.

“It is easy to see how you could be distracted, but Anthony McGrath has done a lot of work with us this year on the mental side of it.”

Four years ago, James Carroll was a member of Jim McGuinness’s Donegal Under-21 squad that reached the All-Ireland final, coming within a crossbar’s width of beating Dublin. James has played for the Donegal seniors in the Dr McKenna Cup during McGuinness’s reign.

Watching that breakthrough year for an Under-21 side containing Murphy, McLoone, McGrath, McHugh, Molloy and Walsh, the seeds were planted for the younger Carroll.

He says: “I watched away at that under-21 games. It was memorable and they were so unlucky. There’s a lot of those senior players who were on that side so it shows you how you can move up to senior level too. Those boys in that under-21 side were heroes – they got to an All-Ireland final and it was obviously a huge thing.”

This is his first year involved with Bonner’s side, but already he can feel the benefits, even if there are two years between him and the oldest player in the squad.

He says: “I’d have been playing away with the Gaoth Dobhair boys but I wouldn’t really have known the others at all. I never thought I could make the step up and play alongside them. Declan has handled us very well and the way it is now a lot of players could play absolutely anywhere.

“If you’re getting subbed you’re not angry because you know that the boy coming on is going to do a good job. There is no shame in getting subbed or no shame in being a sub. This really is a 33-man job and if you were to come to training on any night you’d see how hard every man is pushing.”

Sunday will be a special day around Gaoth Dobhair. With nine players set to tog out for the All-Ireland finals, it will be one of the biggest days ever for the west Donegal club.

“There are posters, flags and bunting up everywhere. It’s kind of weird because two years ago I was part of the other side of the buzz.

“You just need to switch off from all of that and concentrate on getting the job done. The way we can repay the people of Gaoth Dobhair is to come back with nine All-Ireland medals. Can you imagine?”