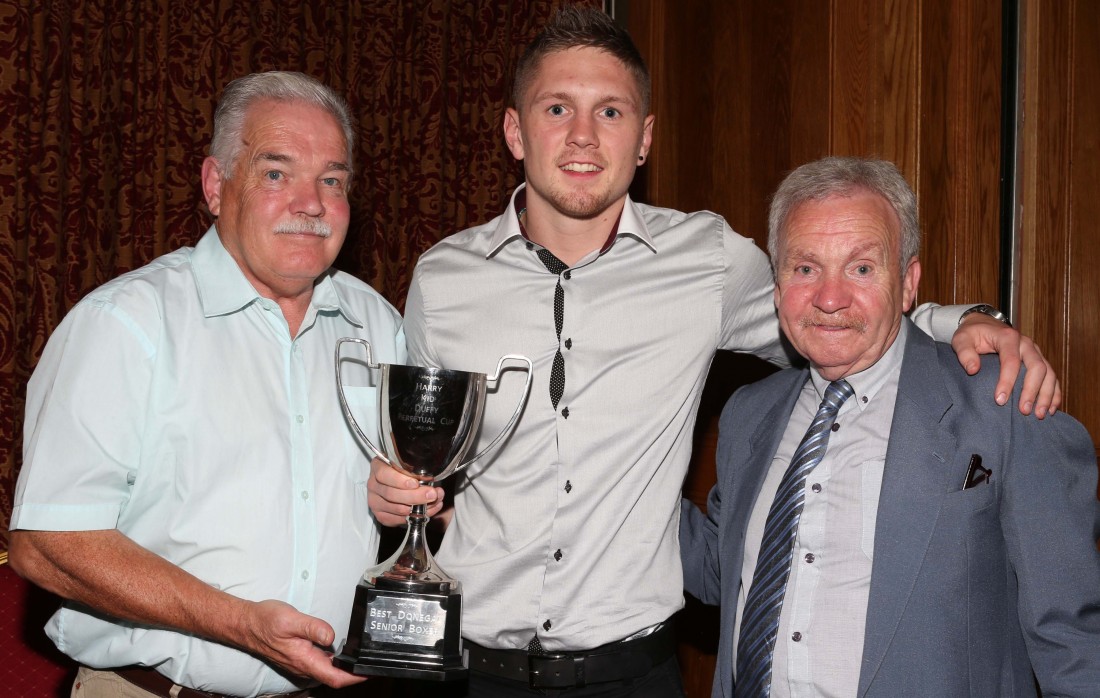 FOR the second year in a row, Jason Quigley and the Finn Valley ABC swept the board at the Donegal Boxing Board’s annual awards on Saturday night at the Abbey Hotel.

The 23-year-old has recently turned professional and won his first two pro bouts in America, but his winning of a World Silver medal last October saw him take the Harry ‘Kid’ Duffy Cup for the best senior boxer on Saturday night.

The awards are to honour achievements between September 1 2013 and August 31 2014 and it was another hugely successful year for Donegal boxers. Quigley topped the bill on Saturday and was the star attraction from the 196 crowd in attendance. He created history in becoming the first Irish male boxer to reach a world final in Almaty.

With wins over Howard Reece and Fernando Najera giving him the perfect start to his pro career, he’s now gearing up for fight number three on October 30 in Boston.

Conor Quigley attained three-star coaching status while accompanying Jason to the world championships in Kazakhstan and he was one of three recipients of international awards – alongside Illies Golden Gloves duo Sadie Duffy and Stephen Friel.

For the second year in a row, the Finn Valley ABC was named as the Club of the Year and Paul O’Donnell presented them with the Jimmy Murphy Memorial Cup.

For team Quigley it was a night to be honoured among their own before they head back to their California base later this week ahead of pro bout number two in their career with Golden Boy Promotions.

Jason has estimated that he had 250 fights as an amateur – winning 240 of them!

“It’s a great record to have as an amateur because you’re always out fighting, always in competition and it will really stand to me as a professional,” said Quigley who also won the European Senior title last June.

“That’s great backing to have.

“To go on the run I did last year in 2013 with the Europeans and the Worlds was a great help. I boxed at the World Championships on the 10-9 scoring system and without headgear.

“Ireland isn’t a big country but we have a lot of sporting heroes with a big history. To make history in boxing was absolutely amazing and it was a proud moment.”
With a big Irish diaspora based in Boston, Quigley is expected to draw a crowd at the end of October.

He said: “Everybody knows the support the Irish have – to get the country behind me would be an absolute dream come true.”

His father, Conor, remains his coach and alignment to Oscar De La Hoya’s stable means he’s mixing it with the best while his promotional team, Sheer Sports Management, are experienced in the field.

Quigley said: “I have everything I need and it’s up to me to just go and do the business.”

Former Olympian Brian Anderson senior (Twin Towns) was inducted into the hall of fame as was Jack Greene (Carrigart), while a special presentation was made to Peter O’Donnell who has served 25 years as the Board’s PRO.