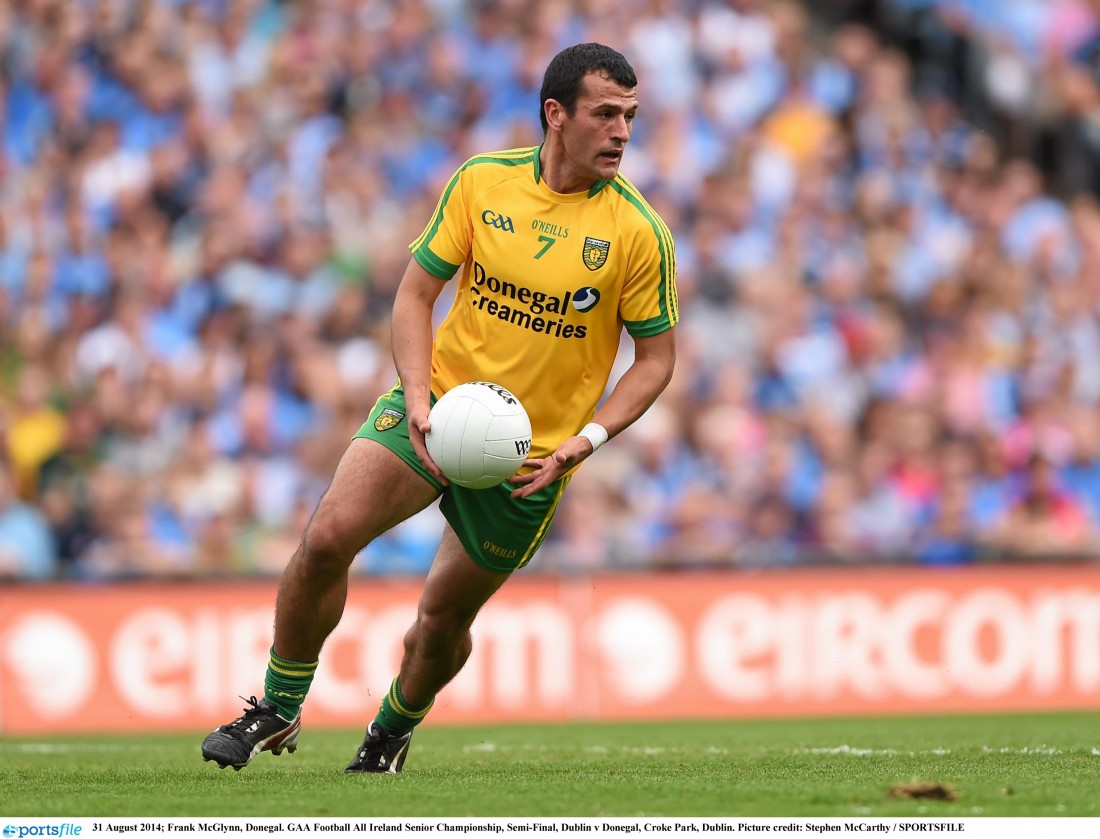 IT is easy to see why Frank McGlynn has been such an integral part of any Jim McGuinness plan for Donegal.

The affable Glenfin man has been one of the most consistent performers in the green and gold of his county over the past few years and he still has the hunger for more.

“You have motivation going into an All-Ireland Final. You want to win the Sam Maguire so badly and these chances don’t come around every year or every second year. We are smart enough to know that this group of players we have now will not be around forever so we have to make it count so we will go into the game every bit as motivated as Kerry.”

McGlynn played a starring role in 2012 when Donegal saw off the Kingdom in Croke Park but he is well aware that defeat, coupled by years without an All-Ireland title will be motivating factors for the opposition.

Five years without an All-Ireland is a long time for Kerry who are so used to winning it, but if you looked back at those five years you’ll see that Kerry have always run the All-Ireland champions close. They’ve never been beaten by much, or beaten off the pitch. Every day they go to Croke Park they put in their own performance and on the day if that’s not good enough they are happy with that, but you will always be guaranteed that they are going to perform.”

Indeed, he suggests, there is quality aplenty in Donegal’s final opponents and they will need to be at their best to see them off on the day.

“Kerry being Kerry, no matter what team they put out they always have six fantastic forwards to put out who are always able to take their own scores. A lot of teams these days might be going for a more defensive style of play, sacrificing a forward here and there, but Kerry, no matter where they are on the pitch, they are going to have fantastic footballers who are confident on the ball. They are a team that can change tactics, they are going to keep the ball at all costs because they are a footballing team and they know how vital the ball is.”

The victory over Mayo – even if it did take a replay and extra-time – showed, says McGlynn the character and resolve in the Kerry side, as well as the talent at their disposal.

“We know ourselves from playing Mayo that they are very well organised, very fit, well trained no matter when you play them. Kerry having two games back to back against them in such a short space of time will have helped them. Especially coming off the back of the drawn game. A lot of people would have said that maybe Kerry had missed their opportunity and Mayo were slight favourites going into the second game, but it was a fantastic game of football down in Limerick and Kerry did seem to have a lot of the freshness back compared to 2012.

They were very fit looking, even the older players in the team, Aidan O’Mahony and Martin O’Shea were rolling back the years and playing vital roles. If you look at Kerry then and the panel they have coming on in extra time they had a lot of subs coming on to hit massive scores and it showed the confidence they have in each other.”

The respect he has for his opponents is clear, but McGlynn, like the rest of the Donegal players, have confidence in their own ability, plan and panel too.

“With the intensity levels and the fitness levels now, the jobs that people are asked to do, you can’t sustain it at a very high level for 70 minutes and that’s why it is vital that you have the panel. I think both Donegal and Kerry have shown in the semi-finals that they both have strong panels.

“Kerry had subs that come on to kick massive scores in the second period of extra time to get them over the line, they won’t be found wanting when it comes to the panel.

“This year, maybe even different to 2011 and 2012 we seem to have more strength and depth in the panel and have players to come on and really make that difference for us.”

“It is fantastic to have players the likes of Odhrán (MacNiallais) –  it is hard to believe it is only his first real championship year – and Ryan McHugh coming in on his second year and his full championship campaign. Even the players who have played a lot of games, with over 100 games under their belts – and there are a lot of them on the team – would say that you still need that freshness and that energy. Those boys that have come through, everybody is waiting for them to falter on the big day whereas they are taking every day in their stride and they are pushing forward and improving all the time.”

McHugh and MacNiallais played huge roles in the win over Dublin, but the Glenfin man insisted that after that win the focus from the players immediately went on the next step.

“After the game we are all big enough to know that those days happen to everybody, no matter who you are. You are always there to be defeated as champions, it happened to us in 2013. It is not a nice feeling to have when your championship finally comes to an end. We were aware of that and aware too that is only a semi-final. There are no cups, no Sam Maguire is handed out after that we know we have a massive day ahead again in the final day.”

Having experienced the build up in 2012, he feels this time it’s very different, adding with the Minors in the final as well it’s a very special occasion for Donegal, but he is cautious about people getting too carried away.

“I think maybe in 2012 we were expected to beat Kerry and were expected to beat Cork, but this year we were serious underdogs against Dublin so I think that has brought a little bit more hype with it. Dublin were the All-Ireland Champions but if you look back at 2013, Mayo tore us apart and we were the previous All-Ireland Champions but they didn’t win the final. As of yet we’ve beaten Dublin but we have so far only another Ulster title to look back on, if we lose the final that victory over Dublin will be all for nothing.”

With that in mind, McGlynn likes to keep his focus on football neatly tucked away in its place as the excitement builds across the county.

“It is difficult when everybody just wants to talk football, but you have to keep it in its place. Every time you come to train you switch on and you are preparing for the All-Ireland Final, but outside of that you can just prepare the best you can. Keep your diet and hydration right and apart from that I rather switch off and forget about it until I meet up again in the team environment and really focus on the game then.”

Once again the team will meet up and head away for a few days as a unit before the final, something he says has been a help.

“It’s a nice time to spend together, as a panel you are getting to know each other, you get to know the people off the pitch as well as on the pitch. There is no end to the work you can get done when you are together for 12 hours of the day and getting full rest then. We use the time to the best of our potential when we do go away and so far it has worked very well and hopefully it will pay dividends on All-Ireland Final day.”