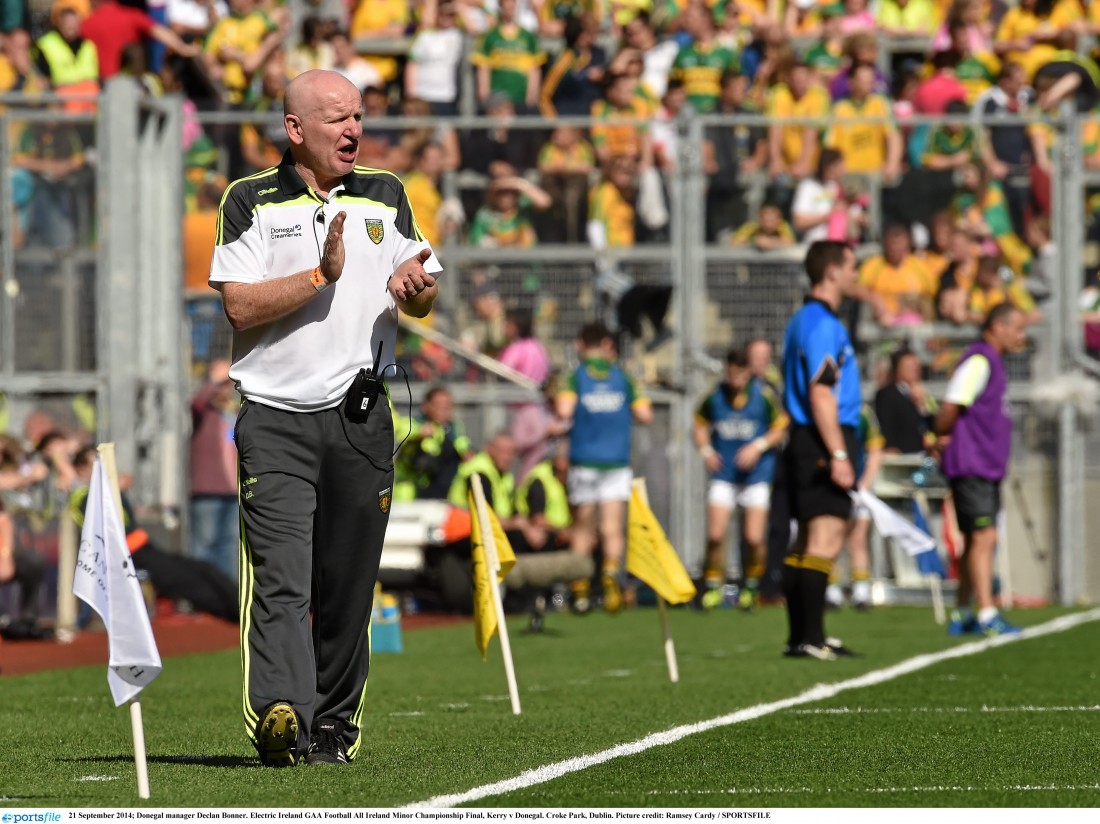 DECLAN Bonner spoke to each one of his thirty-three Donegal minor players in the wake of Sunday’s All-Ireland final defeat by Kerry.

It had been a painful afternoon for the Lettermacaward man, whose squad suffered a first defeat in three years. Through Under-16 and Under-17 level, they’d beaten all in front of them.

In reaching Sunday’s All-Ireland, they etched their names onto stone as the first minor team from the county to reach an All-Ireland final. They were beaten by clinical Kerry, managed by Jack O’Connor, who has now won All-Ireland titles at senior, under-21 and minor level with the Kingdom.

For Bonner, the 0-17 to 1-10 defeat was even more painful during the week when he watched a re-run of the game and looked at those glorious goal chances: Lorcan Connor’s first half effort that was hit at Shane Ryan, the thundering shot by Jamie Brennan that cannoned back from the post and Cian Mulligan’s attempt right at the end which was saved by Ryan.

“It is still very difficult to accept and get over the disappointment,” Bonner said.

“We went out we had our plans we had our expectations. The word defeat was never mentioned or entered our heads. We went out fully convinced that we could beat Kerry.

“I feel gutted for the lads. They put huge, huge effort into it, the backroom team gave of their time and energy all year.

“We came up short against a very, very good Kerry side – a game we could have won if we’d taken our chances in the last quarter.

“We knew it was going to be very difficult. We knew Kerry were going to be hard to beat. They are a very good side.

“We knew we had to be on our game and we knew when the scoring chances arose we had to take them. Unfortunately we did not take all the chances that we created throughout the game and especially a number of chances we had near the end.

“But we have to hand it to Kerry. Unfortunately, there has to be winners and losers and maybe overall over the 60/62 minutes, Kerry were the better side and probably deserved their victory.

“We knew going into the game that we needed to produce our A game just like we did against Dublin, in the semi-final. Dublin were equally as good as Kerry and we probably got the rub of the green against Dublin and we didn’t get it against Kerry.”

Many of his players will now move on. Of last week’s team only Danny Rodgers, Michael Carroll, Stephen McMenamin and Ethan O’Donnell are minors next year. From the panel, only Conor Doherty and Gary McFadden will return for 2015. 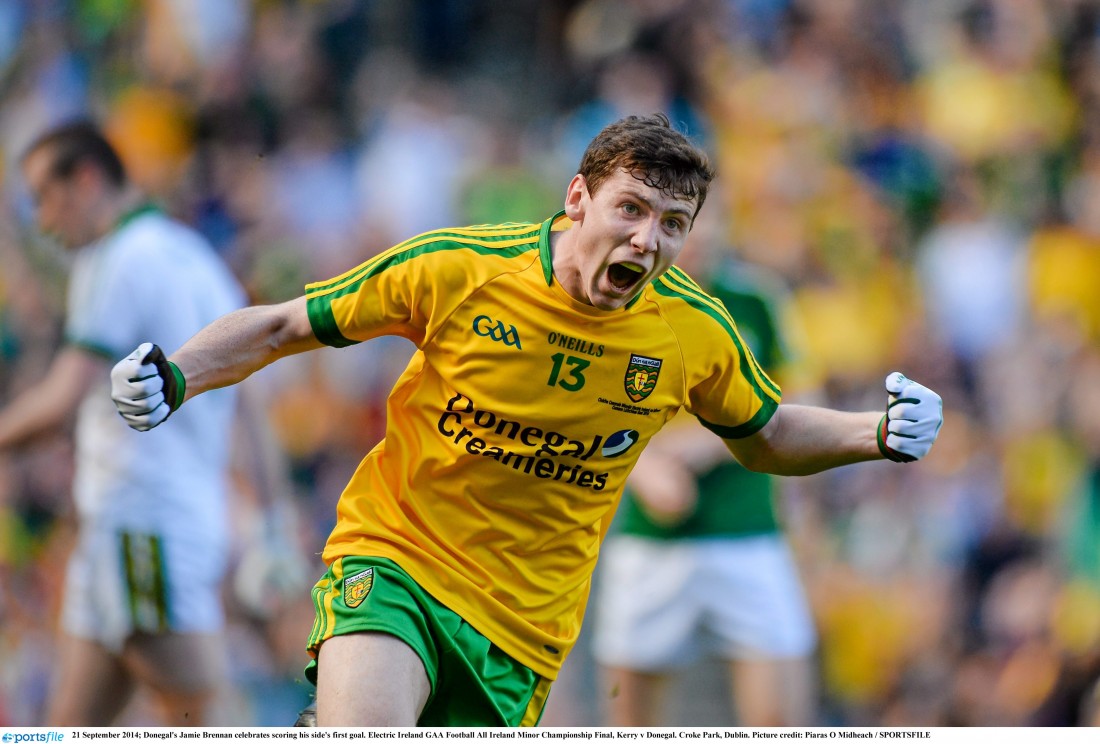 Bonner said: “We had a good chat with them on the pitch after the match and we took them inside afterwards and  spoke to the them again and reassured them.

“They are really good lads and a number of them will move on from here and will play county U-21 and senior in the future.

“I have spoken to everyone of them on an individual basis and I have told them that they will get out of the game what they want, if they put in the effort.

“These lads have put in a huge effort over the last few years for the county.

“They can hold their heads high and they have done Donegal proud and we got to a stage in the championship that we have never been in before.

“It is unfortunate that we didn’t get over the line. I believed in this bunch of players, I believed they could win but unfortunately they didn’t and they have to move on now.”

Bonner took great encouragement from the attendance at the post-match banquet in the Citywest Hotel on Sunday night.

“We had 1,800 people sitting down for a meal at the banquet in the Citywest Hotel and another 1,000 people attending afterwards,” he said. “Almost 3,000 people and not a bad word being said – all these lads will remember this. Donegal supporters are way above any other supporters in the country.

“It’s been a brilliant journey, but just a really disappointing end to a really good season for us.”

After winning the Ulster Minor League and Ulster Minor Championship, Bonner’s side emerged from a water-tight contest against Roscommon in the All-Ireland quarter-final before they got over Dublin in the semi-final.

The return of Eoghan Bán Gallagher last weekend saw the Killybegs man elevated to the starting XV again after he was forced to sit out the game against Dublin. Bonner showed his own bottle when he dropped the team captain, Niall Harley. The Ballyshannon man came on as a sub, but was replaced again as Bonner sought an injection of Ciaran Diver’s blistering pace for the last three minutes – and it might have paid off as the Moville man’s searing burst resulted in a goal chance for Mulligan, but he was denied by Ryan.

“I met my management team and we picked the players that were going well in training,” Bonner said.

“Some players were unfortunate things did not go well for them in the game.”

If he were to get a re-run of last week, would he do it differently?

“They were the players going well in training and they all deserved to be there and they all gave it 100 per cent.”

Donegal won the Jim McGuigan Cup again last month and the county under-21s reached the Ulster final – a game they lost to Cavan – so Donegal football is in a healthy state. St Eunan’s College defeated Colaistí Inis Eoghain in the MacLarnon Cup final and the Letterkenny school now moves up to play in the MacRory Cup this year.

At county level, Bonner hopes that Donegal can harnass the hard work of the last couple of years.

He said: “These guys will be better players for this year. It is a bitter pillow to swallow right now and the wounds are still very raw but I still think a lot of these guys will move on and will represent Donegal in the future at U-21 and senior level.

“This work can continue because we need a conveyor belt of talent coming through from under age all the time.”

Like McGuinness, Bonner has begun a period of reflection before deciding on his own future. After his own endeavours over the past three campaigns, it would be a shame were Donegal to lose his services.

He said: “I don’t know what I’m doing to be quite honest.  No more than Jim I’ll have to sit down. It’s been a huge commitment over the last two years. We’ll see.”