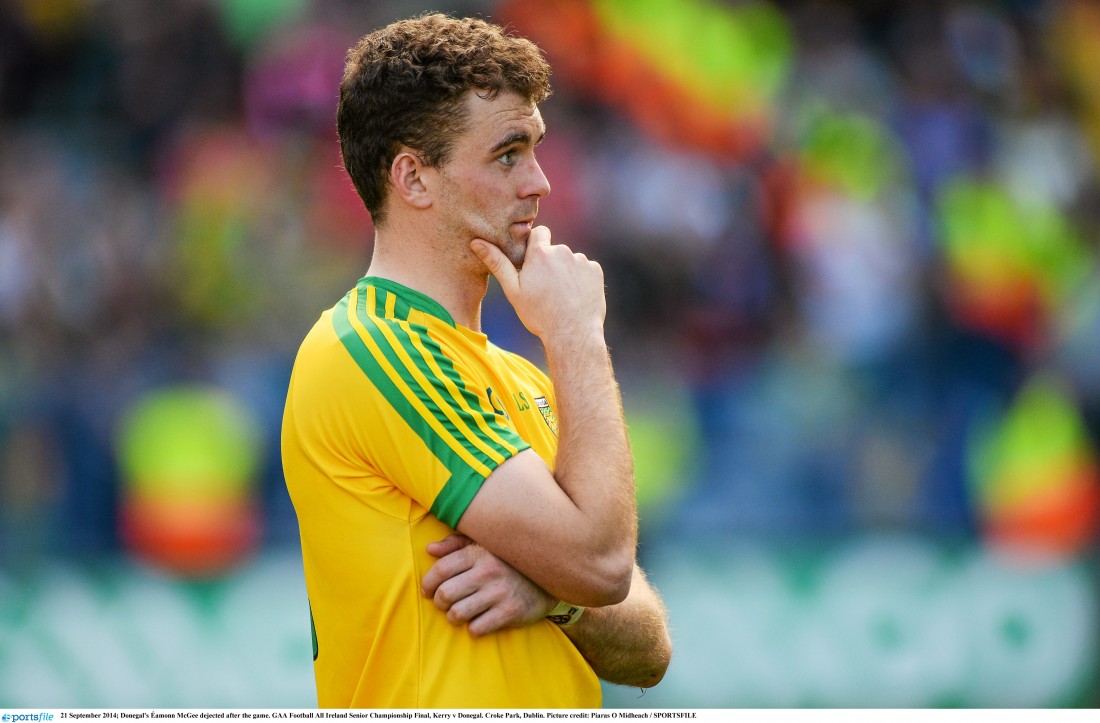 DONEGAL’S players are back into the cut and thrust of the club championship this week, so reflecting on the All-Ireland final will have been a brief process.

The inter-county futures of a few will now be in question, but a number are expected to hold off until Jim McGuinness’s stay-or-go decision is known.

Seven of the Donegal squad are into their 30s and nine of them have played in excess of 100 competitive games for the county.

Neil McGee and Frank McGlynn have said they’ll be back for another go.

“Listen, Jim said after the game, ‘boys, we’ll take a few weeks to reflect’. He’s been absolutely brilliant for us for the past four years. We’ve had a great run of it. It’s just hard to put a finger on it.”

McGlynn had been rumoured to have considered walking away last year, but the 28-year-old Glenfin man – who played his 100th Donegal game in the McKenna Cup game in Armagh earlier this year – swallowed a deep breath on Sunday when asked if he’d be back in the green and gold.

“Hopefully. All things being well I’ll be back,” he said. “You’re only as good as your last one and I’m disappointed with the way things worked out for us today.

“We’ll take a few months now to recover and recuperate and look back on the year as a whole and move on to next year.”

Eamon McGee was non-commital and is one of the men who could stick or twist depending on McGuinness’s next move.

“Listen, Jim is like myself and a few others – we just have to sit down and decide,” he said on Monday.

“Ideally the plan was to have a second All-Ireland in the back pocket and sail off into the sunset.

“We’ll just have to re-evaluate that and think about it, but if Jim is knocking about it would be hard to walk away from it, but going by what he says he is not closing the door on it, so there is hope for us yet.”

Rory Kavanagh hinted at the recent press day that his time was close to an end with Donegal. Others who will ask the hard questions include Neil Gallagher, Christy Toye and Colm McFadden. 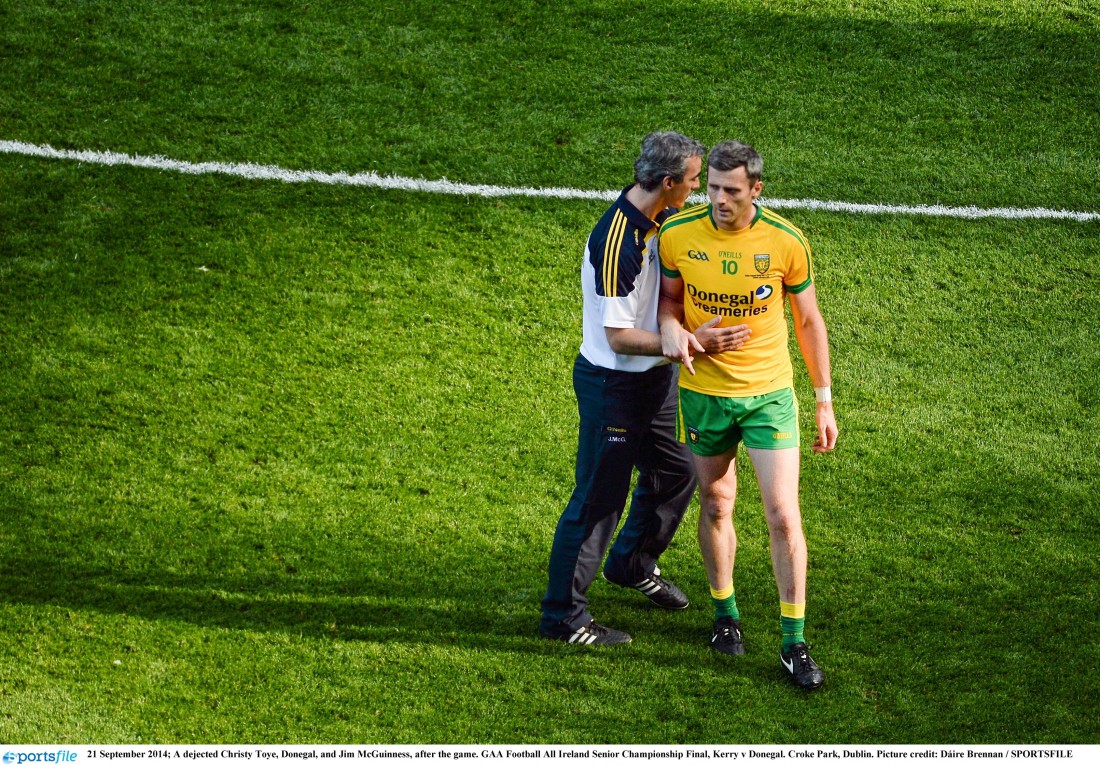 A dejected Christy Toye, Donegal, and Jim McGuinness, after the game

For most, there is no hard evidence that they should hang up the boots.

The moments after Sunday’s game was not the time for making the call.

“It was like a funeral on the bus coming home straight back to the hotel. We got a great rection in fairness to the supporters.  It was a terrible feeling landing into the hotel empty handed. We will still get up in the morning. We will still be fit to do it. It was just very, very disappointing.”

McGee is likely to get an All-Star nomination, but seems as if he is in danger of being edged out in the voting for a spot on the full-back line, just as he was two years ago. Despite an excellent season, Kieran Donaghy’s 1-2 haul last Sunday could count against McGee when the selection committee deliberate.

McGee found Donaghy a tough proposition, but the Gaoth Dobhair man was disappointed he didn’t have his own ‘A’ game.

“I struggled sometimes when the ball went in. He is a top quality player definitley and it’s just unfortunate,” he said.

“Nobody is unmarkable. I’d say if I had got my ‘A’ game I’d be confident enough against him but it wasn’t to be on the day. He is a handful for any full back or any corner back in the country but yesterday I just wasn’t at the races.”

“I would pride myself every man I have marked, apart from Kieran Hughes, has been taken off. That would be my bench mark. Donaghy got a point and he was the focal point for a lot of play.That’s where I set my standards and he got the better of me.”

Having been in two All-Ireland finals in four years, as well as another semi-final and having reached the quarter-final in 2013, McGee believes there is no reason Donegal can’t be back challenging for the big honours again.

He said: “No, no reason at all. I think a lot of success is down to the mindset and you have in Donegal a young fella coming in to that set up and they expecting to win an Ulster and be competing at the highest level.

“That’s half the battle then is that when you get them in you have to get them doing well at training and kicking on. I wouldn’t say it’s a bad set up for any manager or player to come into. It’s a good set-up.

“We were made to win even a provincial title even a few years ago. Then the goal suddently shifted to win an All-Ireland. We won one in 2012 and at the same time Ulster is a massively competitive environment and you have to take great courage that you actually won three out of four years.

“So it shows you we are a good enough team.”

Still, Sunday’s defeat jars. A second All-Ireland would have sent this Donegal way out on their own.

McGee said: “People would have knocked us and kind of said it was one hit wonders. You would have shut them up and it would jsut have been nice to walk around with two All-Ireland medals in your pocket. Listen, that’s the way it goes and you just have to take it. It is just very disappointing.

“It’s just wile hard to get words into it.”

The year, overall, will be put down as a successful one for Donegal with promotion secured back into Division 1 while they are the Ulster champions, something that has been forgotten in certain quarters since Sunday. Not in the Tir Chonaill camp, though.

“But, when you get to that stage you just want to finish it up. When we look back on 20/30 years and say we were part of that team that won three Ulster medals inside four years and that will be nice.”

The enjoyment comes from the winning. The journey has made them smile, but only because of the triumphs.

“When you devote yourself to something like that you have to put your heart and soul into it,” he said.

“If I want to enjoy a good time I’ll go down and play darts on a Saturday or Sunday night and I’ll have good craic there.

“But when I’m giving a massive proportion of my life to the GAA I want to be getting results and, anyway, I’m s***te at darts!”