Advertisement
HomeSportGAADonegal: ‘Back where they belong – loved by their own supporters’
Advertisement 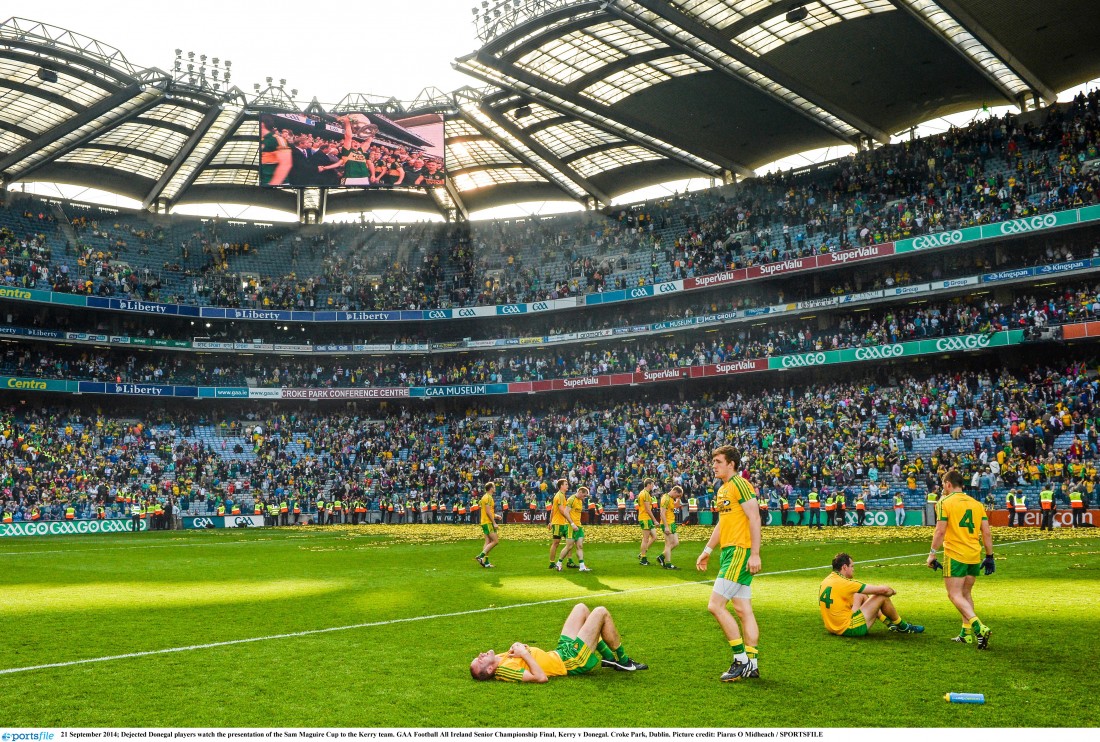 Dejected Donegal players watch the presentation of the Sam Maguire Cup to the Kerry team.

“When you’ve been fighting for it all your life
You’ve been struggling to make things right
That’s how a superhero learns to fly
Every day, every hour
Turn the pain into power
All the hurt, all the lies
All the tears that they cry
When the moment is just right
You see fire in their eyes
‘Cause he’s stronger than you know
A heart of steel starts to grow”
The Script – Superheroes

ON THE night of July 26 2010, Jim McGuinness took to the floor of a county committee meeting in Jackson’s Hotel.

After a breakthrough term as manager of the Donegal Under-21s, McGuinness was appointed to succeed John Joe Doherty as the senior manager. Weeks earlier, Donegal were humbled by Armagh in an All-Ireland qualifier and the road ahead was uncertain.

McGuinness talked about his ambitions that night and there was no mention of Ulster titles. A whisper of an All-Ireland win and his audience would likely have broken into laughter – just as his Under-21s had done when he told them at the outset of their campaign that they’d win Ulster. That was the mindset of Donegal football when McGuinness first fastened the velcro of the Bainisteoir’s bib.

“At the top of the agenda will be to get the team back playing for the jersey, getting pride in the jersey, hunger, good football and then getting them to enjoy playing the football and working hard for each other,” he told that meeting.

McGuinness said that Donegal needed a ‘spark’ and when asked by this newspaper following that meeting what his main aim was his response was telling.

“If we can get a situation where the players are respected by the supporters and back where they belong – loved by their own supporters – we’ll have achieved a lot,” he said.

At the time, players were on the receiving end of severe flak and criticism from the county’s supporters – who were thin on the ground.

McGuinness’s first Championship game as senior manager was attended by just over 7,000 people. On Monday night around 6,000 gathered in Donegal town to salute a team that has gone from zeroes to heroes. They turned the pain into power from the moment McGuinness took the baton.

Around 40,000 Donegal people jammed into Croke Park for Sunday’s All-Ireland final against Kerry. In his term, McGuinness has sailed the Donegal ship through its most glorious sea ever. Sam Maguire in 2012, Ulster titles in 2011, 2012 and 2014, not to mention his winning of the Ulster Under-21 crown in 2010 and the winning of the National League’s Division 2 in 2011.

“I think there is a really good connection between the supporters and the players,” McGuinness said.

“I think the players have made themselves very available to supporters and they have created a really good bond. They are always very available for young kids and everything else.

“I think that’s really important because they are ambassadors and that’s the first thing I said when I came in to take over as manager: ‘You are ambassadors, you are representing your county and your clubs and you have to walk that way, talk that way and project that way.’

“Kids that maybe want to play for Donegal in ten years, what they see and their role models is hugely important and I think our lads have done a great job on that in the last four years.”

McGuinness has begun a period of reflection during which he will weigh up his options. The job is his if he wants it for another term.

With a young family in Glenties and with a job in Glasgow as a perfomance consultant at Celtic FC, McGuinness has a lot to consider.

On Monday in the foyer of the Citywest Hotel, McGuinness outlined that his role at Celtic wouldn’t be a barrier, despite a recent promotion to working solely with the first-team.

“Ah no, Celtic have been absolutely fantastic to me,” he said.

“They have been really top class, from Neil (Lennon), the previous manager, and Ronnie (Deila), this manager, the chief executive (Peter Lawell), Dermot (Desmond) the owner, they have been so flexible with me.

“So my flights and everything would always work around our training and where we are. If there was a game on then I would miss the game to go to the Donegal training, that has always been the way it has been and I’d like to thank them for that. They have given us the opportunity to prepare the team really well this year. They have been great support and they have been really really flexible.” 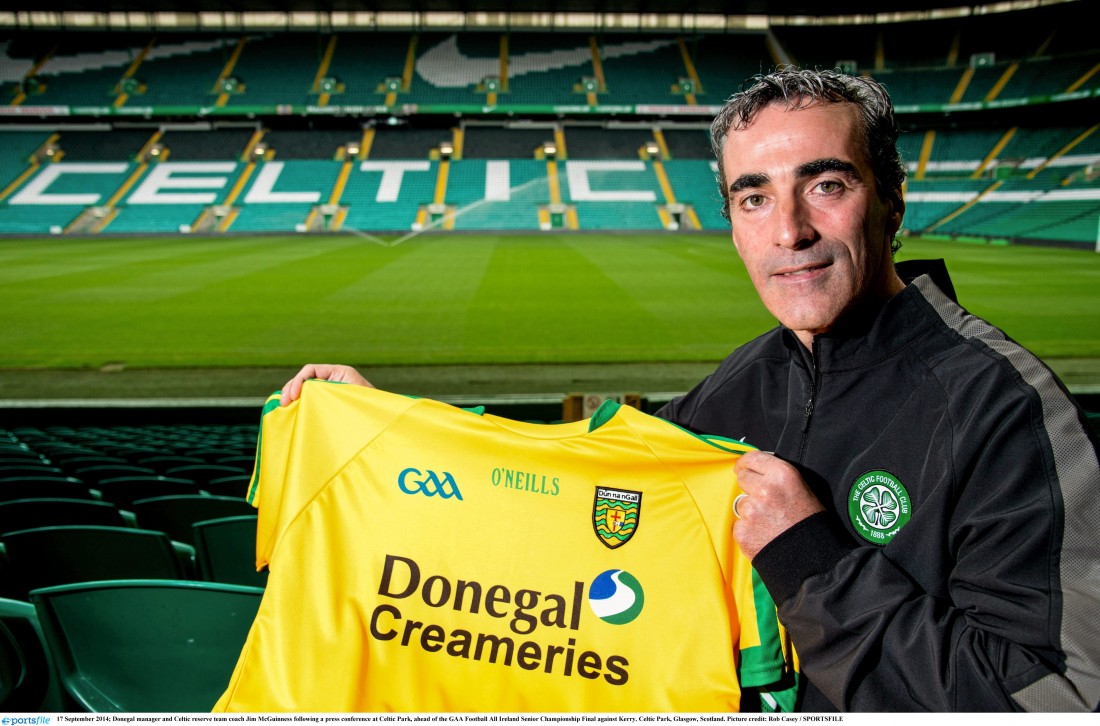 McGuinness was clearly dejected after the defeat. It bit hard.

McGuinness said: “I don’t know was it the occasion or coming off the big game against Dublin, I still haven’t worked that out but we’d be very disappointed in that aspect of it.

Kerry played very well, had a very good game plan and were deserving winners, there’s no doubt about that but we would have a normal level and we didn’t get to that level that we try to get to and that’s the toughest part of the whole thing.

“I don’t honestly know, it was great to get through the game (against Dublin), it was a really top-level performance but our preparations between the semi-final and final were really good. We’d a full complement going into the game, we’d our game-plan well nailed down going into it.

“I suppose there were certain elements of our game-plan that we weren’t able to push forward on and the ironic thing was, even the goal chance at the end, it was a real incision and directness from Frank McGlynn and a few other players, going really positively and directly at the Kerry defence and they found a way to goal.

“There were too many times that didn’t happen, particularly in the first half, we were meeting eight or nine Kerry players on the ’45, we needed to be purposeful and not just one player doing it but three and four to ask different questions going into space.

“I think Rory Kavanagh done it once or twice, had a bit of joy, but he was on his own, Lee McLoone the same…and a few times they ran into traffic and were turned over because they were isolated.

“We got back into the match, we got level and we went a point ahead in the second half. Then we conceded the second goal and it was a bit of a hammer blow but we responded really well.

“We done something very similar in the Armagh game, when Armagh went a point up and we responded very sharp and slick and fast and reeled off to really good points to win the match. But you’d have to ask the question, why are we not doing that in normal time and open play? That’s the one that’ll keep me up for a few nights.”

Paul Geaney’s early goal rocked Donegal on their heels. In the stands, the Donegal crowd was stunned and on the pitch the players were always in an uphill struggle thereafter.
It came with only 49 seconds gone.

McGuinness said:  “The goal in the very first minute had an impact because you’re chasing the game whereas if you go a point or two or three up people are more energetic. It was definitely a shock to us and it was a shock to the supporters too to concede a goal that early in the game.”

Darach O’Connor was inches from putting Donegal on level terms with a 25th minute goal chance that deflected wide off Brian Kelly, the Kerry goalkeeper. Donegal didn’t get a ‘45 for that touch from Kelly. Late on, Colm McFadden’s fingertips almost sneaked in a goal, but the inside of the post came to Kerry’s rescue.

A game of inches was all of a sudden a game of centimetres. 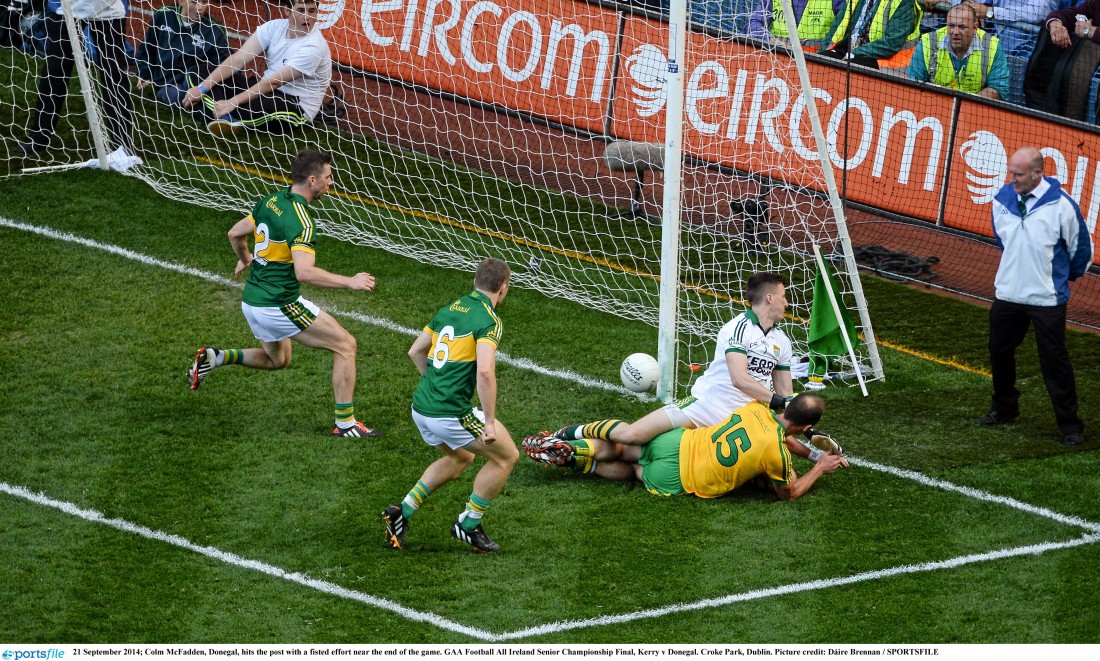 Colm McFadden hits the post with a fisted effort near the end of the game.

What of Kieran Donaghy’s goal and that jaw-dropping moment when Paul Durcan’s kick-out was intercepted by the big full-forward, who slammed to the net? Donaghy was inside the ‘D’ when Durcan was taking the kick-out. In the first-half, Durcan can be heard over the match commentary howling ‘Get him (Donaghy) out of the f*****g D’…

McGuinness said: “You can pin-point this situation and that situation but we didn’t take the game to the level.

“It was evident from the crowd I thought. I felt there was lulls in the stadium, it wasn’t like an All-Ireland final in some respects.

“I know it was tactical but when we’re at ourselves we’re snappy, we’re working hard, we’re turning the ball over, we’re bringing the supporters with us and I think the Donegal supporters were waiting for us to click into gear to get behind us and that didn’t happen enough and not consistently enough to create that synergy.

“I thought the referee as well, for both teams, struggled for periods of the game. He didn’t have an impact on the game in terms of swaying the game one way or the other but these are all wee bits and pieces but, for me, from a coaching point of view, we needed more energy.

Whether or not Donegal fans will get to see the likes of McFadden, Toye, Gallagher and Kavanagh in action in the green and gold again remains to be seen.

McGuinness said: “We had a lot of very tough conversations at the back end of last year and people committed. There are probably one or two there that probably won’t be back, if I’m gauging the thing right.

“But you never know and that’s why I would be very conservative in commenting on it because maybe in a week or two they might say ‘listen I’m 30 or 31, but I’m still in good shape and I might have something to offer next year again.’

“I think it’s important just to keep it cool and make good decisions after reflecting over a period of time.

“We have to go home and reflect on everything. We will go down the road together and stick together as we have always done. We have had a phenomenal journey with this group of players, and whether we win or whether we lose we’ll stick together.”

The big question is whether or not they’ll be together as they were.

They are, as McGuinness said on that July night four years ago ‘back where they belong – loved by their own supporters’.