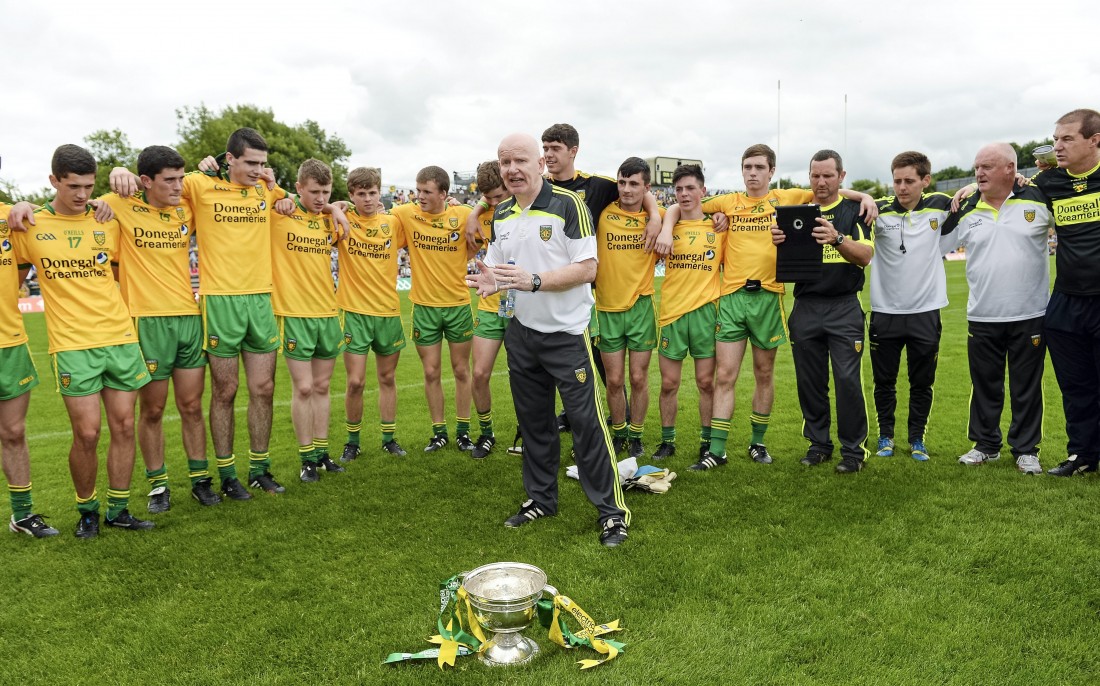 THE Friday after his Donegal minors edged past Dublin in a gripping All-Ireland semi-final, Declan Bonner was doing his rounds when someone mentioned Stephen McBrearty’s man of the match display five days earlier.

Bonner, as a sales rep for the Findlater Wine and Spirit Group, travels all parts of Donegal on a daily basis, talks football wherever he goes.

Bonner was taken by the mention of McBrearty’s man of the match award. It struck him: He hadn’t known.

The Na Rossa man, a veteran of 110 games for the Donegal senior team over a fourteen-year period (1983 to 1997) and another three years as senior manager, he’s no rookie on these big weeks.

For him, like Jim McGuinness, the group is what matters.

“It doesn’t matter to be who puts it in the net or over the bar – so long as the team gets that score,” Bonner says.

“To me, if they’re playing well as a unit they’re of more benefit. I’ve seen players who play well as an individual, but that doesn’t always contribute to a group. That’s one thing we have really tried to get through to these guys – and they have done.

“It probably hasn’t been easy for some of them. A lot of these lads are the top players in their club sides and they have a lot of responsibility. A lot of it is individual at club level, especially lads from the so-called smaller clubs because buying into a tight team ethos maybe can seem like a tough ask for them.

“All of a sudden they’re a small fish in a big pool.”

Two players, Stephen McMenamin and Conor Morrison, whose names hadn’t been on the matchday panel for the Ulster Championship game in Derry, had significant contributions in the semi-final win over Dublin, with McMenamin in for a start and Morrison playing a starring second half.

Off the bench, Donegal have also had big displays, from the three points hit by Stephen McBrearty, Ethan O’Donnell and Gavin McBride against Derry late on, to O’Donnell’s nerveless winner against the Dubs.

“I always tell them that their chance will come – and you look now at Conor Morrison and Stephen McMenamin who have come right into the frame.

“That all gives players hope.

“To be fair to those players who aren’t making the 24, I’d speak to them a lot, and they are being very honest.”

Bonner’s Donegal have broken the mould having become the first Donegal team to reach the All-Ireland minor final.

Having gone through the last three campaigns unbeaten, winning the Buncrana Cup in 2012 and the 2013 Jim McGuigan Cup – the Ulster Championships at those grades – Bonner’s boys followed that up by winning the Ulster Minor League this year and now stand on the cusp of the ultimate triumph.

‘All-Ireland’ was first uttered by the Lettermacaward man in the huddle following their defeat of Armagh in the Ulster final in July.

“In that huddle in Clones, I just said to them: ‘Phase two is gone, let’s start the final period, we have three stages to go’,” he says.

“I told them the ultimate prize was there – and they’re sixty minutes from it.

“We broke the season down into three periods. At the start of the year All-Ireland was never mentioned. We said it for the first time in Clones after we won the Ulster Championship.  We took it stage by stage. The Ulster Championship was three stages: Derry, Antrim and Armagh.

“Life is funny and you just don’t know what’ll happen. This has always been a target. When I started off with this group it was a pipe dream.

“Just because I came in wasn’t going to guarantee any success. Manys the All-Ireland winner all over the country has tried and hasn’t succeeded.

“Very quickly, these lads believed in what we were doing as a management team. We have a huge backroom team and everyone puts in a huge effort. We have a group of 45 people and everyone has put in massive work. I just happen to be in charge of the thing. It has been a brilliant journey, but we don’t want it to end without this All-Ireland now. We want to get up the Hogan Stand.”

The big stage is nothing new to these players, many of whom have been in finals for their clubs and schools. But the All-Ireland final is different to any other. Bonner will alter nothing in terms of his preparation.

“There are certain things that are out of our control – the carnival we call it,” he says.

“What we can control is what goes on on the pitch.

“You would have to see to believe the meticulous preparation for these matches – every last minute is accounted for. Every last detail is accounted for. We have done this from the word go. Our match days do not change. So, all of a sudden it’s not going to be different just because it’s an All-Ireland final.

“This won’t faze our boys. The odds are there and they were the same for the semi-final. It’s how we react and cope on the day. There will be nerves, but that’s only natural. If we can bring our ‘A’ performance to the table we are well capable.”

From the moment he stepped onto the field to give Paddy Hegarty a hand with a Southern Regional Development squad in 2011, Bonner found himself back in the thick of it.

When he goes into a job, there are no half measures – and he deplores negativity.

As a club manager with Na Rossa, Dungloe and Gaoth Dobhair, Bonner kept up his touchline trawls, but it is at the inter-county grade where he feels at home.

“The beauty about county management is that you know that you have more,” he mentions.

“I know now that there are ten or twelve players outside of our circle, guys who aren’t on the county squad, who could come in to do a job. You just have to pick and choose.

“You aren’t just looking at them from a footballing ability point of view, but you’re looking at every last ounce of his character, his commitment, his attitude and his discipline. We throw a lot of stuff at these lads in terms of everything from gym work, to diet, to hydration, everything. If some players are starting to fall behind they’ll go. I know there are others out there. You don’t have that luxury in a club set up.

“That makes your job a little bit easier. They have bought into it all 100 per cent.”

Donegal’s minors have a real never-say-die attitude about them, as shown by their refusal to accept defeat. In their opening Ulster Minor League game, they were six behind against Tyrone in Convoy, but battled back to win it. Bonner has credited a lot of the development in this end to the work of Anthony McGrath, the squad’s psychologist from Ballyshannon, who is a former county minor himself.

There have been nervy moments during this campaign, but Bonner is hoping his men can save the best wine for last.

He says: “I still feel we haven’t played to our potential. I feel that there is a lot more in us.  When we’re playing well, we’re really good – but we haven’t done that for long enough in sustained periods. If we could do that we’d get teams out of the way.

“The last thing I want is someone clapping me on the back and saying: ‘It’s been a great year’. Definitely not. We want to win it. That has been our aim.”