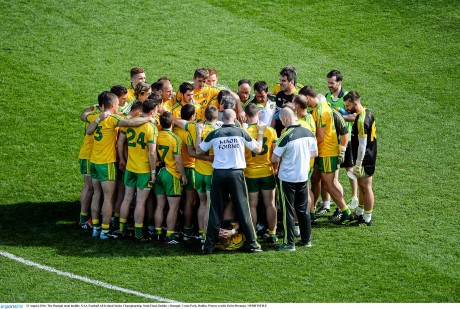 He’s on the first floor of the Sean MacCumhaill GAA Centre in Ballybofey, through the window behind him Donegal’s county ground is resplendent. His audience are entranced by every word spoken by the Glenties man. They’ve been here before at various critical junctures of a tenure that is now nearing the end of its fourth year.

The locals present were winding back to that wintering Sunday afternoon twelve months previously when McGuinness gave a press briefing in the MacCumhaill Park press box following the Glenswilly-Kilcar game in the Donegal senior football championship. 48 hours later, news of the breakup of the Donegal backroom team and Donegal was back in the spotlight, even taking some of the column inches that would ordinarily have been given to the matter of the All-Ireland final between Dublin and Mayo.

On September 14th, McGuinness agreed to stay on as Donegal’s manager following a series of meetings with players, county board officials and clubs.

The summer fell apart through defeats by Monaghan in the Ulster final and Mayo in the All-Ireland quarter-final. They hurt McGuinness, primarily he says now, because ‘the carpet was pulled from under us’.

Three rounds of the Donegal SFC were played during the Ulster Championship and McGuinness felt his side didn’t have anywhere near the amount of work done that they should. When the big exam came, Donegal flunked their lines and the reasons behind it left a gaping wound for the manager. When he proposed that two rounds of the club championship be played in late April-early May, the clubs said ‘no’. The compromise was parking the commencement until Donegal’s interest in the All-Ireland had ceased.

It is September and Donegal are still standing, along with Kerry.

“That decision has brought us to an All-Ireland final.” McGuinness is convinced of it.

“It is just preparation – the ability to prepare,” he says.

“We didn’t even have our players to train them for four weeks out of the eight of the Ulster championship last year. We didn’t even know where they were. Glenfin – what are they doing in terms of training? Or St Eunan’s? Sure we hadn’t a clue. Are they doing a kick around or tactical work or doing 400’s?

“Not an iota did we have for that four week period. On top of that we had nine injuries. So you are haemorrhaging on one level and you are not building. And for me championship football is about building. If you win, it buys you four weeks and you build again.” 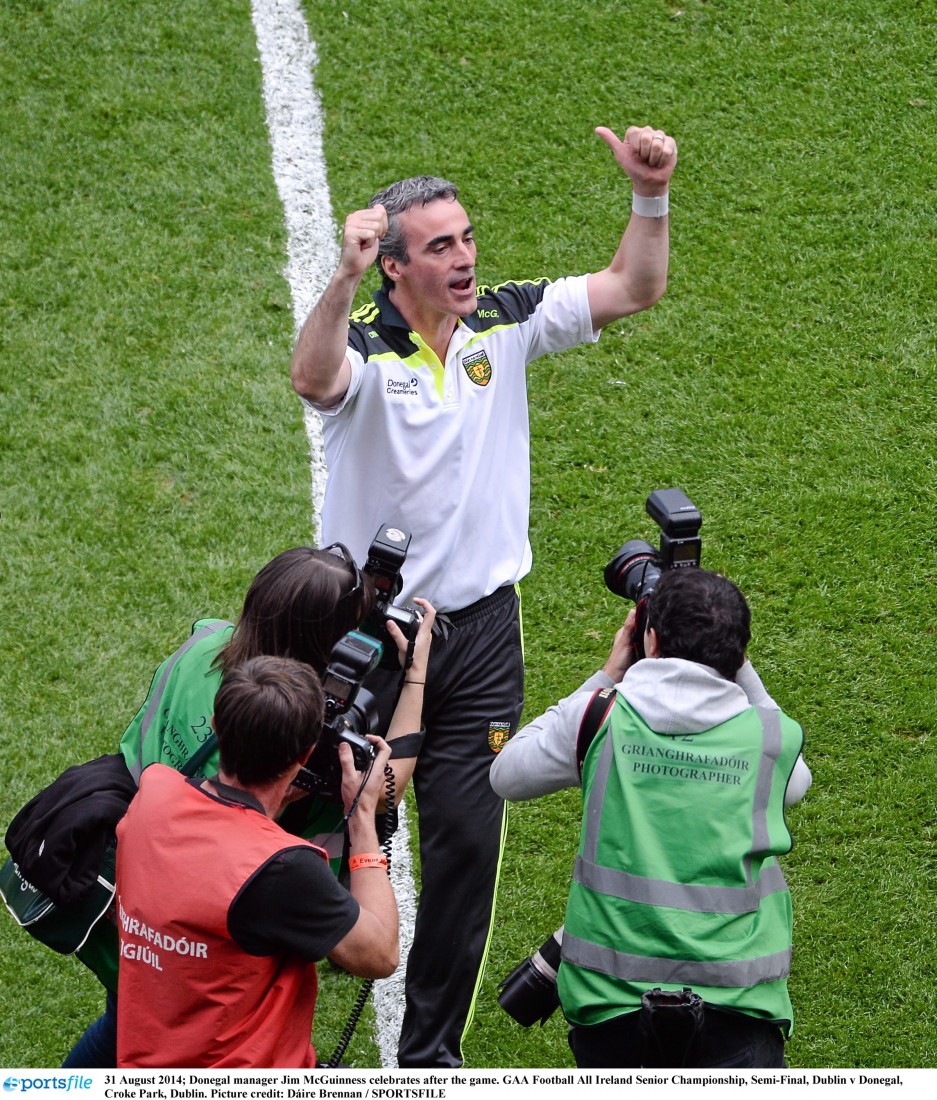 Donegal manager Jim McGuinness celebrates after the win over Dublin

Donegal’s middle three lines were decimated last summer. They trained sixty-six times, but Karl Lacey took part in only 20 of those, Neil Gallagher trained fully 21 times, David Walsh’s figures were down to 44. On top of that, Mark McHugh was marked absent because of injury for 32 and Frank McGlynn missed twenty.

The average attendance figure for players this year is 93 per cent.

Christy Toye wasn’t even on the panel last year, but now the St Michael’s man has been resurrected. His last involvement had been the 2012 All-Ireland final before he had to stay away last year because of a neurological disorder. He’s back now and making as strong an impact as he ever has.

He says: “Normally I would train the boys at a high intensity level and build endurance over the season, but this year I flipped it around to endurance building the intensity over the season with a few to taking those injured players with us. If we went too hard too soon, we would have been back to square one.

“And we have had nearly everyone available for all our games but I feel we have progressively moved forward and got fitter with each of our championship matches.

“We had a situation last year at training where we picked up injuries the night previous and this was a week or two weeks out from the Ulster final. Half of our players had been knocked out of the club championship, heads were down, we had the injuries then that had to be dealt with.

“So you’d all these negative dynamics, you’re losing players, you’re not getting traction in your training, you’re picking up injuries – you’re managing a situation, not a team. The clubs have given us the opportunity to manage the team this year and prepare as best we can.”

Their preparation has been as good as it has ever been.

After a pre-Championship training camp in the Algarve, Donegal spent the weekend prior to the Ulster final in Leitrim. A five-day camp at Johnstown House in County Meath, their regular location, was where the plans for beating Dublin were laid down. And now, this week, ahead of the All-Ireland final, McGuinness’s army is in lockdown at Lough Erne near Enniskillen.

“When you get away for four or five days, it is like the icing on the cake,” the Donegal manager says.

“It pulls it all together. You can sit down like we, you can have a chat with somebody, you can say ‘do you understand that’ or if you are going with a certain set of kick-outs, you can make sure that they understand their position and get clarity.

“If you have a training session and then you go into the dressing room and everyone is shooting off, you don’t get that. It just brings everyone together.”

There is another side to this time away too.

“You know with our boys, there is no shortage of blaggards in the group and the manager is not immune to that either,” he says with a wry smile.

“They will play cards at night. There is table tennis. They just bounce off each other. If you go through three or four days of that, somebody will get caught with a gag and that is the butt of the joke for the next training session and that fun and momentum carries back home. So it is a good help that way.”

McGuinness’s Dublin-based players regularly train under the tuition of Eugene Eivers – a strength and conditioning coach with the squad who is a lecturer in Blanchardstown, a former college friend of McGuinness’s from his days in Tralee IT.

Last week, Paul Durcan, Paddy McGrath and Martin O’Reilly were spared the road trip to and from the capital thanks to the provision of a helicopter to transport them to Ballybofey.

The training camps are almost entirely funded by backers sourced by McGuinness. The fruits of those trips are clear given that Donegal are seventy minutes from recapturing Sam Maguire.

There have been difficult moments, too, though. 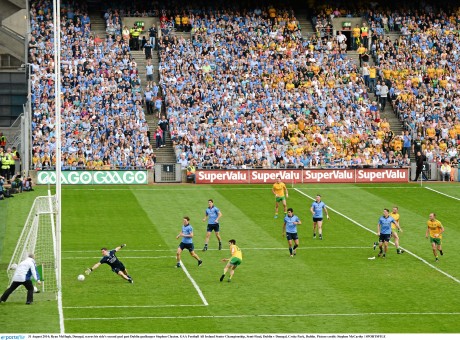 Ryan McHugh finds the net for his second goal against Dublin

“We have a nightmare situation in the winter,” McGuinness says.

“It is a disaster. There is no other word for it because you have 15 or 16 players working out of the county or in college. Ifyou want to train hard, it is wild hard to do that when you have 16 there and they are thinking Jesus Christ, what are the other 16 doing.

“That is why the Derry game was such a big game – it came on the tail end of the exams. Everyone had their exams finished on the Wednesday.

“When we got over that, I knew we had everybody home bar the Dublin lads for every training session. That is a big lift.

“When you are up to 26, 27 players and everyone sleeping in their own beds, getting well looked after at home, no pressure of exams, swatting and the fatigue that comes with that, it is a big lift. That is the time you crave.”

It was said following their defeat by Monaghan in the Division 2 League final that Donegal were a ‘tired team’, but the words of Tommy Carr – the former Dublin manager who regularly took his teams abroad – still stick. Carr advised a concerned Declan Bonner that Donegal would come good. “The benefit of that Algarve trip will be seen in a few weeks.

And so it proved.

McGuinness says: “We made the decision to go to Portugal six weeks out from the Derry game with that game in mind and I think we got a lot of work done there. We didn’t get the benefit in the league final because we were doing two pitch sessions and a gym session every day. So we looked tired in the league final but got the benefit in the Derry game.”

Their summer has spiralled since – and all because of that show of hands in Ballybofey last September.