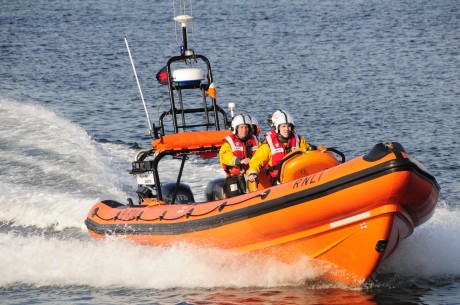 THE volunteer crew of Bundoran RNLI Lifeboat were called out twice over the weekend to two different incidents, both of which ended well.

On Saturday afternoon (27th September) just after 1.40pm, the crew received a report that a boat’s propeller had become entangled in the rope of an old lobster pot just off Mountcharles.

Making their way across the bay to the scene, the volunteer crew found that the boat had indeed become entangled and was unable to move. The experienced skipper had dropped anchor to ensure that the craft was stabilised which eased the work of the RNLI crewman who went under the boat in order to cut the rope from the propeller. Within minutes, the thankful skipper was underway and the lifeboat returned the station in Bundoran.

Just after 6pm on Sunday evening (28th September) the pagers sounded again as Malin Head Coast Guard had been alerted to a surfer who was in difficulty in the water at Rossnowlagh. Within 6 minutes the lifeboat was in the water and speeding towards the scene with shore crew also tasked to the scene.

The Rescue 118 helicopter based at Sligo was also tasked. However as the lifeboat passed Kildoney Point, the crew were informed that the surfer was ashore and they were stood down.

Deputy Launching Authority at Bundoran RNLI Lifeboat said “Thankfully these callouts ended well. We would as usual always remind members of the public that if they see anyone in difficulty on the coast to dial 999 or 112 and ask for the Coast Guard.”